Loki's first season goes out on a temporary blip more than a bang.

Warning: This contains spoilers for Season 1 of Loki. Not caught up? Read our spoiler-free review of the opening episodes here

Stop us if you’d heard this one. Yesterday’s the past, tomorrow’s the future, but today is a gift. That’s why it’s called the present. Loki, Marvel’s latest superhero series for Disney+, has been a fantastically fun ride for its first season, full of timey-wimey twists, surprising chaos and entertaining silliness, but its finale highlights the key problem at the heart of the MCU, one that can stop its projects fully delivering on their gifts – Marvel is always busy thinking about the future.

The opening episodes of the series are a masterclass in world-building and imagination, cramming in ideas and details in every frame. What’s remarkable about the series overall is the way it manages to balance fast-paced action with lengthy conversations, confidently managing to pause just to soak up the chemistry between Tom Hiddleston’s Loki and Owen Wilson’s Time Variance Authority agent Mobius – a double-act that doubles down on the way that Loki needs someone else to bounce off (and backstab).

That understanding of Loki’s character extends to the inspired casting of Sophia Di Martino as Sylvie, another variant of Loki who is the one behind the killing spree of TVA agents. She, inevitably, turns out not to be the Big Bad after all – more on that later – but she’s an excellent foil for Hiddleston and a fascinating character in her own. Martino brings to the role the kind of offbeat energy that made her a standout in Channel 4’s Flowers, and confidently swaggers through the scenes with determination – and an anger at being hunted by the TVA since she was a child that marks her out as a very different person to Hiddleston’s privileged royal. Even the way they fight is choreographed differently, one wielding weapons like it’s a ballet, the other flinging fists like it’s a bar brawl.

Watching the two of them interact with, and grow to understand, each other is the central arc of the six-part series. From the duo initially sparring to eventually fleeing for the apocalyptic world of Lamentis (hiding away from the TVA’s detection in the temporal shadow of planetary destruction), their chronological road trip is a classic odd couple tale – the show takes Loki’s confrontation of his own timeline and fate in the opening episodes and uses it as a springboard for a wider story of self-acceptance. And so, while they’re trying to conquer the Alioth in the Void at the end of time, it’s only right that they should encounter some other Lokis with their own backstories and baggage. A special shout-out here goes to Richard E Grant as Classic Loki, whose cries of “glorious purpose” convey just how heavy the burden is that’s carried by each Loki variant, united as they are by being perpetual losers.

While the romantic sparks that begin to fly between Loki and Sylvie could have a slightly incestuous ring, it’s all too fitting that if Loki should fall in love with anyone, it would be a version of himself – and that’s where he ends up at the Season 1 finale, able to accept and love the aspects of himself that he recognises in Sylvie, even as he’s moved on from the motivations of revenge and pain that once drove him and currently drive her. Because they’re in such different places, it’s a relationship that surely can’t work – and so, while they share a kiss that could be an affectionate farewell or a cunning power-play by Sylvie or a bit of both, she betrays him and sends him back to the TVA through a time portal, leaving her to confront the actual Big Bad once and for all. As Loki puts it, “you can’t trust…and I can’t be trusted”. And so they’re both, like all Lokis, destined to lose and be alone.

That tragic, poignant exploration of what makes a Loki a Loki is almost undone, though, by the season finale, which gives over the majority of its runtime to what is essentially a monologue from the ultimate villain: He Who Remains. Played by Jonathan Majors with a cheeky arrogance, he’s a captivating and unsettling screen presence, but after a series so predicated on the power of dialogue, a lengthy monologue feels slightly jarring, no matter how well it’s delivered.

As we hear of how He Who Remains is a variant of King the Conqueror, who invented the TVA to stop a time war between versions of himself from different universes, we also see it unfold through nifty desktop animations – a rare instance in Loki, after its subtle early world-building, where the series forgets its knack for showing and not telling. (The set design in He Who Remain’s citadel home, on the other hand, tells us so much without words; part asteroid and part kintsugi, it’s wonderfully ornate, hauntingly remote and captures something of the fractured psyche caused by diverging and colliding timelines.)

Sylvie’s decision to kill He Who Remains means bad things for Loki, as he’s sent back to another version of the TVA where his old colleagues, now friends, don’t recognise him, and where a Kang variant appears to be in charge. But while the end credits promise a Season 2 that could provide some closure (and hopefully Owen Wilson’s Mobius riding a jet ski), all of that is slightly lost in Marvel’s focus on building up to what’s next: Kang’s appearance in the next Ant-Man film! Multiverse madness with Doctor Strange! That fascination with what’s coming up in the MCU timeline means that Loki’s climax turns into a blip rather than a bang.

It’s a shame given the cinematic work on offer, from the sparky dialogue and gorgeously colour-coded landscapes to the superb score from Natalie Holt, and it places Loki nearer to The Falcon and the Winter Soldier’s ongoing storylines than WandaVision’s more standalone, cathartic study of grief. If Marvel’s best films to date have been ones that have satisfyingly wrapped up their individual narratives, relegating each what-comes-next sting to the end credits, the world of TV, which lends itself more explicitly to cliffhangers, may take more time for the MCU to navigate to the same degree of success. 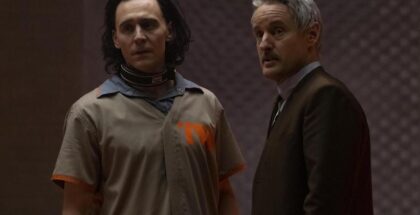