Death and limbo is in the air as Game of Thrones' final season continues to bide its time.

Warning: This contains spoilers for Episode 2 of Game of Thrones Season 8. Not seen it? Click here to see where you can watch it online.

“Without him, you would not be alive.” That’s Brienne (Gwendoline Christie) in Episode 2 of Game of Thrones’ final season, speaking up for Winterfell’s latest surprise resident, Jaime Lannister (Nikolaj Coster-Waldau). It’s a speech that convinces Sansa (Sophie Turner) and Daenerys (Emilia Clarke) to spare the Kingslayer’s life and let him fight alongside them – and it also sets the tone for an episode in which characters are more concerned than ever with the thin line that separates everyone in the show from death.

Because death, by the end credits, is literally standing on Winterfell’s doorstep, turning the castle in the North into a literal last stand, a purgatory that writer Bryan Cogman leans into with the show’s most explicit discussions of mortality to date. The episode title – A Knight of the Seven Kingdoms – is as much a long, dark night of Westeros’ realms, as each stray figure from every assorted house brings with them a shard of history, a trace of sin, a recollection of reckonings owed. “That’s what death is, isn’t it?” muses Samwell Tarley, at one of the episode’s many fireside chats. “Forgetting, being forgotten.” Bran, his argument goes, is the most important person in Winterfell: as the Three-Eyed Raven, he’s a living repository of memories, of existence, which makes him the prime target for the Night King’s quest to bring about an Endless Night that’s dark and full of, well, nothing.

It’s a suitably profound thought in an enjoyably ominous and morbid episode, but it also serves as a niggling example of a misstep in Game of Thrones’ eighth season. With only six episodes in total, and a lot of plot to wrap up in a fairly bloody fashion, Episode 2 of this final run finds the show retreading much of the ground trod by the previous instalment; the feeling of being stuck in limbo isn’t just confined to the characters. Nowhere is that better summed up that Bran Stark, who has always served as more of a plot device than a person: as a boy, he was the vehicle to expose the Lannister incest, before spending an entire season journeying to a cave with a tree, so that he could learn to become Basil Exposition’s warlock cousin. Since then, he’s provided crucial backstory to shape the future of the series, but little else.

Last episode’s cliffhanger saw Jaime arrive at Winterfell and be stared at by Bran. (That’s what Isaac Hempstead Wright has to spend his time doing now: staring at people with slightly squinting eyes.) It was a nice moment of full-circle storytelling, one of many nods back to Game of Thrones’ very beginning. But this episode, their eventual confrontation merely sees Bran wave away the incident – for incident, read: Jaime pushing the young boy out of a tower window in the hope of killing him to death – and say that he’s more than Bran now, he’s moved on to bigger things. All that does, though, is underscore the way that the show’s very slow, deliberate positioning of key plot points starts to frustrate a little. One wonders whether Episode 1 and 2 might have served fans better by condensing them into a single, feature-length episode, rather than mete it out week by week.

Nonetheless, like Episode 1, there are moments to enjoy and tiny flourishes that let characters grow or reflect. While Episode 1 was all about alliances and reunions, Episode 2 is about remembering old grudges and renewing everyone’s understandings of the stakes at hand, a combination that also opens up paths to redemption (and, with it, the risk of shuffling off this mortal coil). And so we have Theon (Alfie Allen) also appearing at Winterfell, where he is welcomed with open arms by Sansa – the two of them as joint survivors, and equal self-saviours, of traumatic horrors makes the duo a surprisingly welcome pairing that may or may not become something more substantial. Theon, who once stole Winterfell from Bran, now pledges to protect him, as they hope to use Bran as bait for The Night King.

Meanwhile, Jorah gets his first proper conversation with Lyanna Mormont (who, in all her bad-assery, insists that she’ll fight on the battlefield), and also gets given the family sword by Samwell to wield. Even sweeter is the moment where Ser Davos, spying a scar-faced girl who reminds him of Stannis’ daughter, persuades her (with the help of Gilly) to do her bit by defending the crypt, where all the women and children will be locked away – along with Tyrion. Why Tyrion? Because, after some counsel from Jorah, Daenerys decides to forgive him for being fooled by Cersei’s lies, and elects to keep him safe so his valuable strategical and political brain survives.

Arya (Maisie Williams), meanwhile, steals the episode again with her flirtatious exchanges with Gendry (Joe Dempsie). She makes peace, of sorts, with The Hound, before going back to the blacksmith and demanding her weapon sooner rather than later – a demand that she accompanies with the playful throwing of daggers into a wooden pillar. As you do. Their conversations ultimately lead to a bedroom scene, which Williams has said the directors and writers let her govern, in terms of how explicit it would be. And it’s refreshing to see one that puts the woman so in control of what happens and when (“I’m not the Red Priestess, take your own pants off!”), even if it bizarre to be reminded that Arya, who has spent several seasons growing into a cold-blooded killer, is still human. It’s no coincidence that she is the only one in the episode who seems to be embracing the stakes of life, or lack thereof, that are facing these characters, becoming the sole person in Winterfell to actually ask about the white walkers on their way to kill them all.

It’s perhaps the only honest conversation for any of these characters to have, as they prepare to meet the unknown: it’s notable that, despite a brief glimpse of a battle plan, nobody in this episode is debating how to slay a walker properly or to stop the Night King from recruiting another dragon – or even, for that matter, that he has a dragon on his side now. There’s emotion in the way that many of them choose to ignore the fact that anyone’s death would still leave them coming back to fight on the other side – Grey Worm and Missandei have a sweet chat about going to Naath to see the beaches once this is all over, which only confirms our predictions of their imminent death(s) are about to come true. But when we’ve already had one hour of these moments, another feels a little bit like Game of Thrones is indulging too much in the build-up before the battle – because, let’s face it, it still has to spend several episodes mopping up the aftermath of whatever happens.

Any frustration, though, at the pacing, or at Bran’s increasingly hollow presence, is mostly balanced out by the chance to see Brienne get a real dose of catharsis. Because, in between the fireside drinking session that sees Tormund talk about how he killed a giant (and launch his bid to be the new spokesperson for drinking milk), they all pause for Jaime to knight Brienne. It’s a sequence that gives Jaime yet another layer of depth, satisfaction for Gwendoline Christie’s once-purposeless ronin, and also a glimmer of hope for the future amid the looming shadows.

Indeed, this is an hour that gathers together the broken fragments of Westeros’ families, the outsiders and workers who have been beaten down by war, and sees them find strength in each other. 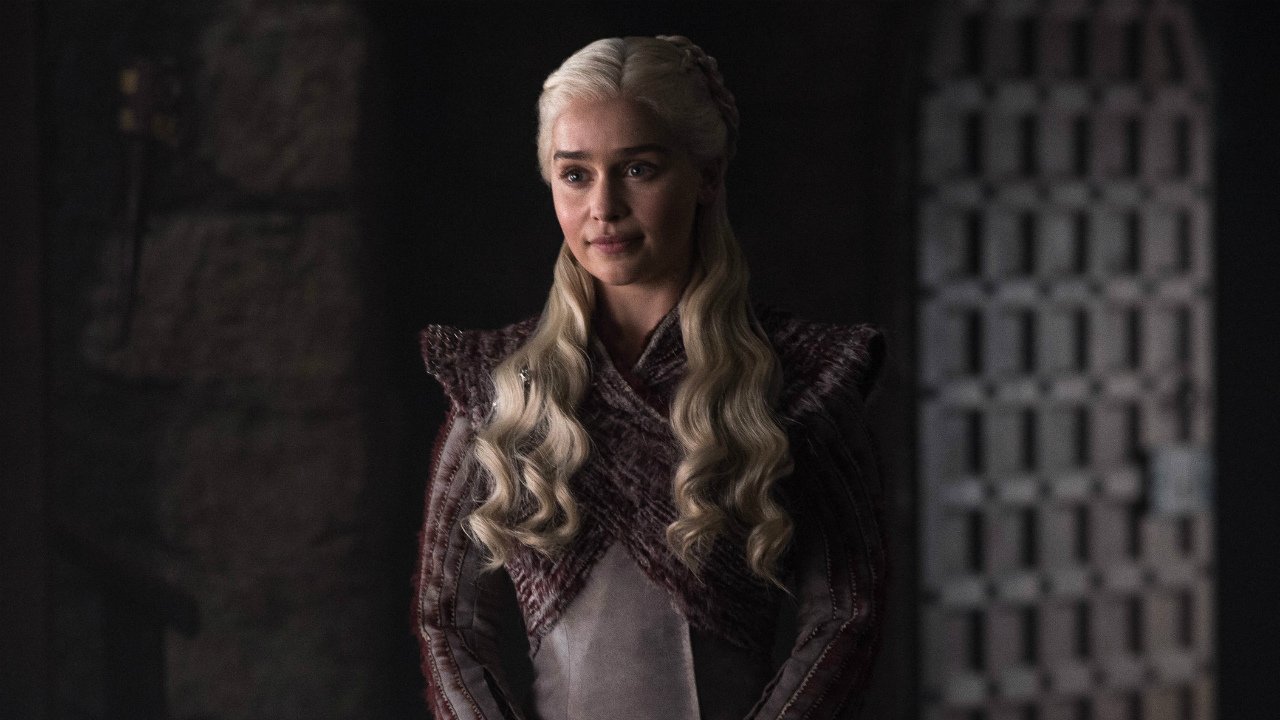 It’s a shame, then, that the episode doesn’t find more time to explore the two most intriguing sources of potential weakness. The first is Sansa and Daenerys’ alliance, as tensions brew between the two rulers. While the latter makes an attempt to reach out in solidarity and support, the question raised by Sansa about the North’s independence is left unanswered.

The second is Dany and Jon, as Kit Harington’s reluctant leader divulges the truth about his family heritage to his lover and aunt. She’s shocked to hear that he also has a claim on the throne, as the sole surviving male heir of the Targaryen family. A possible solution is hinted at by the song sung by Podrick before Briennes’ knighting (and again over the end credits by Florence + The Machine), which talks of Jenny, the lover of Duncan Targaryen, who gave up his throne out of love for her – would Jon do the same for her?

The question is, inevitably (and tantalisingly), left hanging, as the battle horn sounds to take us into the next episode, and so it’s now a question of predicting who will die in the siege of Winterfell. Here’s hoping for something more surprising than what we’ve seen so far this season – Tyrion’s prediction that they will all make it suggests some major casualties are on the cards (and not just Grey Worm). After all, after a long night of reckoning and reflecting in purgatory, any one of these characters is ready to meet their maker.

What if the Night King wins the battle? And, perhaps more pressingly, what if Ser Davos doesn’t get a chance to wander the battlefield beforehand and do his ritual number two? Let the waiting – and the speculating – begin.

Netflix is testing a shuffle button for TV episodes