A runaway train of horror and hilarity.

This is a spoiler-free review of The Witch’s Familiar. Already seen it? Read on at the end for spoilers.

Let us introduce you to every Doctor Who cliffhanger ever: One or more characters (up to the point of everyone in the universe, on occasion) are put into seemingly mortal peril with no chance of escape. We all know they’re going to get out of it, of course – the question is how the hell are they going to do it?

The genius of last week’s apocalyptic cliffhanger ending was to give this concluding part a few different resolutions to get around to within the main story. One of the dangling threads is resolved (with more dangling) before the titles, in a sequence that’s funnier than any of its kind. That’s before the episode even gets started.

You’ve probably already inferred the identities of the witch and her familiar in this episode, but at the outset, the Doctor believes that Missy, Clara and the TARDIS have all been destroyed by the Daleks. Stuck on Skaro with no friends, no TARDIS and no sonic screwdriver, he’s desperate. While a dying Davros continually tries to get him to accept that compassion is wrong, the Doctor might just be willing to tear down the whole planet.

There were whispers of this last week, but the funnier, scarier and all-round crazier conclusion to this two-parter confirms it: this feels much like an in-canon re-jig of Steven Moffat’s first ever televised Doctor Who story. Not The Empty Child, though: we’re talking about his 1999 Comic Relief parody, The Curse of Fatal Death. There’s the Doctor, the Master and the Daleks, and even the sewers and chair jokes make a comeback.

Make no mistake, this is 100% proof Who, but comedy is important here. Moffat’s beginnings as a sitcom writer have informed his time as showrunner, just as Russell T. Davies’ early desire to be a comic book writer informed the full-colour adventures of his tenure. Moffat’s Doctor Who is full of elaborate set-ups building to big punchlines, not to mention a healthy serving of sight gags, and that pays off here better than in any of his previous “part two”s.

You couldn’t guess what’s really going on with Davros, or how the Doctor is ever going to get out of this alive, from what you’ve seen so far – we get a few more tips at the beginning of the episode – but aside from the writer’s reliable structural beats, there’s ample room for drama here. While the witch and her temporary familiar accrue some massive spin-off potential with their bickering and their entirely one-sided teamwork, a greater debate rages between the Doctor and Davros.

Julian Bleach is marvellous, playing the Dalek creator as we’ve never seen him before – more vulnerable than venomous, as we gradually learn the true reason why he wants to settle his long-running argument with the Doctor. Peter Capaldi continues to astonish in the role and it feels as if there’s been at least as much development of his incarnation of the Doctor in these two episodes as there was in the whole of the last series. He continues to show sides of himself that we haven’t seen before and it leads to plenty of dynamite scenes.

It was unforgivable to forget to mention Hettie McDonald’s direction of last week’s episode, so it’s definitely worth saying that she’s played an absolute blinder on both halves. Having previously directed Moffat’s Blink back in Season 3, her horror chops are in evidence once again, but she brings marvellous cinematic scope to the action too. It’s a big shame that these episodes didn’t get a simultaneous big screen release, as Deep Breath and The Day of the Doctor enjoyed.

Following the universal tour that stalled some of the momentum of last week’s episode, The Witch’s Familiar is a runaway train of horror and hilarity. The shock value of The Magician’s Apprentice may diminish on repeat viewings, but this episode dispenses with (most of) the fan-pleasing and frenetic bouncing around the universe to fully focus on its returning characters in their current sticky situation. It feels more adventurous than insular, to open a series on two episodes so geared towards dyed-in-the-wool fans rather than the broader demographic of the Not-We, but this opening pair form a bold opening salvo to a season that is still at the top of its game.

Doctor Who is available on Netflix UK, as part of an £8.99 monthly subscription.

Where can I buy or rent Doctor Who online in the UK?

– Can we talk about how brilliant Michelle Gomez is? Her character has developed right alongside Capaldi’s Doctor in this episode and she continues to ruthlessly and effortlessly dominate any scene with which she comes into contact.

– This episode marks Jenna Coleman’s third time inside a Dalek, after her initial appearance as the doomed Oswin in Asylum of the Daleks and the Fantastic Voyage shenanigans of last year’s Into The Dalek. We’d watch a whole series of Clara travelling with Missy anyway, but for pure comedy value, that spin-off might be even funnier if she was canned full time.

– For the first time since the 1980s, the Doctor is apparently going without a sonic screwdriver from here on out. Sonic sunglasses might be less toyetic, but we don’t think that’ll stop Character Options putting a pair in a Doctor Who-branded box by Christmas. Plus it differentiates Capaldi’s Doctor from the Matt Smith screwdriver model he’s been packing since last season.

– As expected, the confession dial containing the Doctor’s last will and testament remains unopened and will surely be a mystery going forward. The prophecy of a Time Lord-Dalek hybrid is left dangling too: might we see the Daleks and even Davros back before the end of this series?

– The Daleks’ guns are powered by channelled emotion, so they reload by saying “Exterminate”. This handily explains every failed attempt on the Doctor’s life ever seen.

– Finally, there are only two chairs on Skaro and the Doctor gets to sit in both of them. The reveal of the Doctor in Davros’ chair is instantly iconic and the Curse of Fatal Death callback about Daleks’ disregard for chairs is a nigh-unimprovable gag and it’s brilliant to see it make its way into the show proper. Especially because it provokes images of Daleks scouring their whole planet for the only other one. 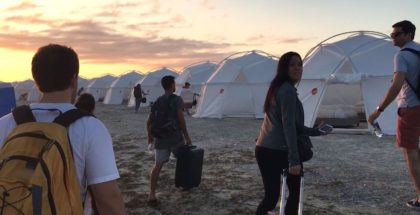