UK TV review: Doctor Who Season 11, Episode 7 (Kerblam!) | Where to watch online in UK | How to stream legally | When it is available on digital | VODzilla.co

A rollicking Whodunnit that more than lives up to its punctuation mark.

This review contains no spoilers for Episode 7, but mentions plot details from the rest of Season 11 so far. Read on below for our additional spoilery observations, after you’ve seen the episode.

“Delivery for the Doctor!”

Episode 7 is the first ever Doctor Who story to have an exclamation point in its title. For every other story title, the exclamation is sort of implied, but pleasingly, it’s more than warranted for Kerblam!. Aside from being a rollicking Whodunnit of the kind that the programme has always specialised in, it’s the most purely entertaining episode of Season 11 so far.

After taking a special delivery onboard the TARDIS (deliveries may take up to two regenerations to arrive), the Doctor finds an unusual note from someone at the heart of Kerblam!. Located on Kandoka’s moon, the galactic retailer is one of many mostly-automated businesses with a 10% People-Powered workforce.

Determined to find out who sent the message, the Doctor and her gang go undercover in the company’s warehouse, getting to know both the people who work there and the robotic TeamMates that watch their every move. From The Robots of Death to Voyage Of The Damned, we love a good story about robots going a bit daft.

Straightforward as it seems, this is an episode that really goes the extra mile. Up until now, it’s been hard to say where each Season 11 episode has truly filled its newly extended running time, but this gets off to the races quickly and keeps adding more and more fun stuff into the mix, until things reach a climactic point. It’s a story about efficiency that does exactly what it says on the tin.

Nowhere is that more apparent than in the dynamic between Team TARDIS. All four of the leads get to play more of their characters – Jodie Whittaker is more Doctorly, Mandip Gill gets to be more inquisitive, Tosin Cole is braver and cheekier, and Bradley Walsh gets to carry on being wonderful – and there’s not a moment where one of them is left standing around like a lemon. It’s taken longer than expected, but they’re finally all gelling here.

Making his debut on the show, writer Pete McTighe takes full advantage of a large guest cast to build up the mystery throughout the episode. There’s the top brass, like Head of People Judy Maddox (Julie Hesmondhalgh) and warehouse manager Jarva Slade (Callum Dixon), and there are the rank-and-file workers, including model employee Dan Cooper (Lee Mack), sunny packing operative Kira Arlo (Claudia Jessie), and shy cleaner Charlie Duffy (Leo Flanagan). After all, the robots can’t be malfunctioning on their own. Or can they?

Entertaining as it is to find out, Kerblam! is not a complete slam-dunk, as it struggles to maintain its wicked pace throughout the mid-section. Additionally, for those expecting a critique of certain retailers and their working practices, you don’t really get it here. The allegory is detached enough that it doesn’t feel too on-the-nose and some of the noisier viewers will welcome a break from more politically engaged stories, but even in genre terms, it’s a little uncomfortable to see which side the Doctor ultimately lands on.

Despite its one-click simplicity, the episode more than delivers on its potential. As a script, Kerblam! could easily have slotted into another era of the new series, which makes it feel like something of an outlier in Chris Chibnall’s first season. But the way in which the regulars and guest stars all get their chance to shine makes it very timely, in a season that hasn’t perfected this balance until now.

Doctor Who Season 11, Episode 7 is available on BBC iPlayer until 9th June 2019.

Think back to 2010’s The Big Bang, and Matt Smith’s Doctor proclaiming that he might buy a fez. Well, it took long enough to turn up, but here it is. McTighe is a lifelong fan of the programme, who is responsible for writing sleeve notes on many of the DVD releases, as well as creating the hit Prisoner: Cell Block H reboot Wentworth. Happily, his first go at writing an episode proper is a hit, and also not without callbacks to headgear and Agatha Christie.

Again, just marvel at how well this episode applies the TARDIS crew to what they’re best at. Jodie finally gets some speeches to deliver, Yaz is every bit of the compassionate copper she’s supposed to be, Ryan gets to apply his specific expertise to adventuring around the warehouse, (“Sprained ankle and a final warning”) and Graham is out making friends. I hope we see more of the entire team working this well together before their first season’s out.

Alright, let’s see… statues, shadows, dust, kids’ drawings, cracks in walls, shop window dummies, water, and… yep, let’s add bubble wrap to the list of everyday things that Doctor Who has made terrifying. In this case, it’s the sort of utterly, ingeniously evil thing a robot would come up with, but it’s all the more notable that the explosive bubblewrap scheme comes from an organic – we mean, a person.

Amid all other suspects, lovely Charlie is a perfectly unexpected terrorist, whose late reveal leaves only a little time to deal with his ideology. As uncomfortable as it may seem to have the Doctor arguing in favour of a capitalist system that profits off automated labour, it’s a deft bit of writing on McTighe’s part that Whittaker ably delivers. And, at last, we have a villain getting their comeuppance.

Meanwhile, on the side of automation, the “Kerblam Man” and the TeamMates are brilliantly realised, striking just the right balance of friendly and sinister for a corporation of that size to unwittingly sign off on. By contrast, the original droid Twirly has echoes of Red Dwarf’s Talkie Toaster, which is hilarious in itself. 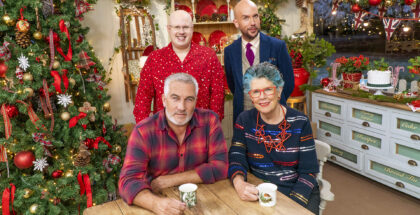 Classic Doctor Who on BritBox: Politics in time and space... July 3, 2022 | Mark Harrison