VOD film review: Superman/Batman: Apocalypse (2010) | Where to watch online in UK | How to stream legally | When it is available on digital | VODzilla.co

Superman, Batman and Wonder Woman team up to rescue Supergirl from the clutches of Darkseid in this action-packed animated adventure.

Adapted from the Superman/Batman comic book storyline, The Supergirl From Krypton, Superman/Batman: Apocalypse is the ninth film in the DC Universe Animated Original Movies line and serves as a stand-alone sequel to Superman/Batman: Public Enemies, with the opening scenes referencing the impeachment of President Lex Luthor. Despite the change in title, the film is effectively an origin story for Supergirl, with Batman largely relegated to a supporting role.

When a spaceship from Krypton crash-lands in Gotham City Harbour, a naked, super-powered girl (voiced by Summer Glau) emerges from the wreckage, claiming to be Kara Zor-El, Superman’s cousin. Taken in by Superman (Tim Daly) and Batman (Kevin Conroy), Kara proves dangerous when it becomes apparent that she can’t control her powers.

After a destructive episode in a park, Batman and Wonder Woman (Susan Eisenberg) persuade Superman to let Kara train on Themyscira, where she quickly learns some impressive fighting skills. However, her strength and abilities attract the attention of Darkseid (Andre Braugher), who kidnaps her to his home planet of Apokolips and brainwashes her into becoming the captain of his honour guard.

As with Public Enemies, Apocalypse sticks very closely to the events of the Superman/Batman comic book, with several scenes, images and lines of dialogue directly lifted from the source material. Similarly, the animation is deliberately stylised to resemble the artwork of Michael Turner, who pencilled the Supergirl From Krypton comics arc. So if you’re wondering why it frequently looks like Superman is wearing eye-liner, that’s why.

The other character designs are more or less as you’d expect them to be, with the exception of Supergirl, who’s given a slightly different, more modern look to her appearances than in the Justice League cartoons. The film has fun with her dress sense too, most notably when Superman / Clark takes her shopping and she picks a wildly inappropriate outfit. (Superman disapproves, but she takes it anyway).

Director Lauren Montgomery (a DC animation regular) packs an impressive amount of action into the film’s 78-minute runtime, meaning you’re never more than a couple of scenes away from a super-powered punch-up. Moreover, the key fight sequences are nicely thought out, especially in regard to Superman and Supergirl’s powers.

To that end, the highlight of the film is a climactic battle between Supergirl and Darkseid, with Supergirl showcasing some thrilling fight moves, most notably a series of rapid-fire punches as she’s knocking Darkseid into the air while flying upwards. Here’s hoping the Supergirl TV show takes a few notes, because a live-action recreation would be genuinely exciting.

With any DC animated movie, there’s one name you always want to see on the credits and that’s voice director Andrea Romano. Fortunately, she’s fully on board here, even making dual cameos, voicing Stompa (a member of Darkseid’s Furies) and news anchor Vicki Vale. As for the casting, Romano clearly appreciates the importance of continuity, since Kevin Conroy (aka. The One True Bat-voice), Tim Daly, Susan Eisenberg and Ed Asner (as Granny Goodness) all reprise their roles from other DC Animation properties. As for the new additions, Glau brings emotional depth to Kara / Supergirl, and while Andre Braugher might not have the same impact as DC regular Michael Ironside as Darkseid, it’s still fun to hear him do the voice, especially if you’re a fan of Brooklyn Nine-Nine. 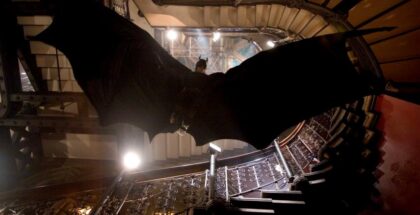