Kate and Laura Mulleavy's feature debut is a gnarled portrait of trauma, guilt and loss.

“Remember when we use to play in the woods together. I got lost that one summer. When I turned around, you were gone. When they found me, I almost didn’t want to come back.”

These words that introduce Woodshock – accompanied by abstract images of Theresa (Kirsten Dunst) alone among giant redwoods – also usher in its principal themes: a little girl lost (and perhaps not wishing to be found), in a primeval terrain of the natural, the folkloric and the psychological.

Most people associate Woodstock with the music festival held there, and with the many psychedelics famously used by those attending. Though its title obviously puns on that, Kate and Laura Mulleavy’s feature debut is set not in 1969 New York, but in present-day Northern California, with the ‘wood’ in its title alluding to the ancient forestlands of that region. Those woods surround the beautiful house where Theresa now lives; they are also the workplace of her partner, Nick (Joe Cole), a logger. Nonetheless, mind- (and life-)altering drugs will continue to play a significant part here, right from the opening, primal scene in which Theresa laces a reefer with a lethal poison and administers it to her willing, ailing mother (Susan Traylor). The ‘shock’ end of the title refer to Theresa’s abiding trauma from lying beside her own mother and watching her die. Meanwhile, Theresa works for Keith (Pilou Asbæk) at a cannabis dispensary – and occasionally, on the side, assists with the suicides of other elderly and infirm people.

The Mulleavys are established fashion designers and helped create the clothing in Woodshock. Indeed, this is a film in which appearances and cosmetics predominate. Using lighting effects, dreamy superimpositions and practical trickery, the sisters craft a succession of ethereal, wispy images – often of a hallucinatory or oneiric nature. There is not much going on in terms of story, and scenes between characters are vague at best, but all the soft-focus wooziness and close-up tactility leave the viewer as lost as Theresa in the grief of losing her mother, and the guilt of helping her die. This is a journey into the thick, impenetrable forest of a frazzled headspace – once Theresa has added potent marijuana and poison to the already toxic mix of her confused feelings, it becomes impossible to see the wood for the trees. Woodshock may in the end contain violence and death, but it remains hard to tell whether this is real, or just Theresa’s dreams and visions, as she takes flight, or possibly even dies herself, in a pharmaceutical haze.

“Do you ever regret it, cutting everything down?”, she asks. She is talking specifically about Nick’s job felling trees that have been alive for over a thousand years – but the question reflects her own anxiety about suicide, assisted or otherwise (the aptly titled Dream Baby Dream, from the band Suicide, features on the soundtrack). As we follow Theresa down into her consciousness, where she tries – not very successfully – to erect a barrier between herself and the wild woods beyond, we bear witness to a beautiful spectacle of damage and dissociation.

While the delicate abstraction of Woodshock is its strength, it is also its weakness, as the film meanders through its uncertain narrative, hitting several peaks of elevated wonder without always seeming to have much overall direction. But for those who subscribe to a Lynchian preference for mood, this certainly comes with plenty of vital vibe, in what is not so much a straightforward story as a kaleidoscopic portrait of a woman less steady than the trees around her.

Woodshock is available to stream online on Shudder UK, as part of a £4.99 monthly subscription, or £49.99 yearly membership.

Watch: Opening scene from The End of the F***ing World Season 2 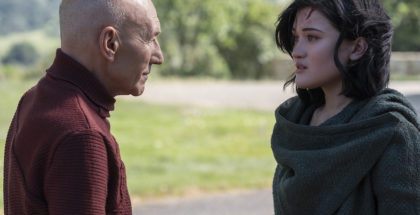