Sheffield DocFest film review: The Witches of the Orient | VODzilla.co | Where to watch online in UK | How to stream

Sheffield DocFest film review: The Witches of the Orient

This stylish and entertaining sports documentary tells the inside story of the 1964 Japanese Olympic female volleyball team.

The Witches of the Orient is streaming as part of Sheffield DocFest – find out more about the festival here.

This highly entertaining sports doc is directed by Julien Faraut, a French filmmaker with a background in archival sports footage, whose previous feature was 2018’s John McEnroe: In The Realm of Perfection. Here, he uses a combination of archive material, animation and present day interviews to tell the story of the 1964 Japanese Olympic female volleyball team, nicknamed “The Witches of the Orient” because of their almost supernatural abilities on the court.

The team began as an Osaka textile factory team, which was so successful that it evolved into the country’s national team, Nichibo Kaizuka. Under punishing coach Hirofumi Daimatsu, the team achieved an extraordinary run of wins in the early 1960s, which captured the imagination of Japan and earned them their nickname from their competitors and foreign press.

Faraut shows the surviving members of the team, now all in their 70s, reuniting and reminiscing over a few bowls of noodles, before focusing on each team member individually, often capturing their current, day-to-day lives. They’re clearly still very active – one is shown working out in the gym, while another is a sports coach.

It’s the archive footage that really impresses though, capturing the women in brutal-looking training sessions and in their fast-paced, hard-hitting competitive matches, as well as in newsreel interviews. Their enduring popularity also inspired a long-running anime TV series called Attack No 1, and Faraut frequently finds inventive uses for scenes from the show, at one point making it seem as if the cartoon commentators are narrating the real-life action on the court.

The anime series also provides some interesting crossover with real life, in its focus on the team’s brutal training regime and their incredibly strict coach – a sequence in Attack No 1 features the exhausted women getting hit hard with practice balls, and it’s clear Daimatsu, who was nicknamed The Demon, employed similar methods and worse. In particular, there’s a horrific-looking image of a bloodied team member on the ground in a Sports Illustrated magazine piece that’s headlined “Driven Beyond Dignity”, but frustratingly, Faraut never addresses that specific incident. In fact, all the women remain fiercely loyal to Daimatsu in the present-day sequences, effectively saying that it was tough, but it worked, as demonstrated by their still-unbroken winning streak of 258 games.

The film is packed with great details, from the fact that the women all had inter-team nicknames (some were kinder than others – team captain Masai Kasai was nicknamed “Horse-Face”), to the specifics of the team’s special move, a sort of attack dive, which Daimatsu took from the movements of Japanese roly-poly dolls, and which plays a key part in the Olympic final.

Throughout the film, Faraut directs with a strong sense of style that is borderline experimental, though he arguably over-indulges it in places, with a few too many interludes involving shots of 1960s Japanese industrial landscapes overlaid with electronic music. That said, the frequent cross-cutting between the various sources is extremely effective, giving the film its own unique energy.

On top of that, Faraut allows the film to build to a terrific climax, effectively dedicating the final 20 minutes or so to the edited highlights of the Olympic final, with the present-day team members giving important context, such as the fact that the much-fancied Japanese Judo champion had been defeated in the final shortly beforehand (and that Daimatsu was furious with them for watching the game).

If there’s a problem with the film, it’s only that the present-day reminiscences don’t yield quite as much juicy material as you might hope, not least with regard to Daimatsu, who gets off extremely lightly. Similarly, it’s a shame that they don’t talk more about Attack No 1, especially as one of the team members is shown watching it with her extended family.

The Witches of the Orient is streaming at DocFest 2021 until 8.30pm on Saturday 12th June. 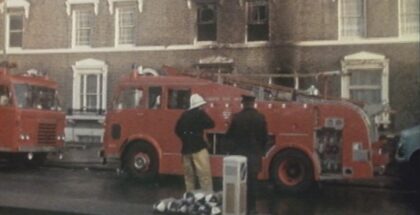