VOD TV review: True Blood Season 7 Episode 4 (Death Is Not the End) | VODzilla.co | Where to watch online in UK 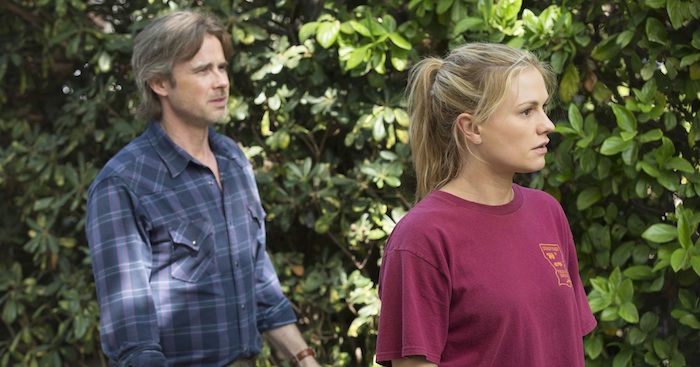 At the rate things are going, this entire season of True Blood could be fitted into a week. Given that a good year has elapsed since the end of Seasons 6, the locals must be desperate for some drama. And they’re getting it in spades.

What the racing pace does mean is that there’s plenty of time for contrasting flashbacks – we’re getting more of the back-story behind Eric and Pam’s infamous enterprise, the vampire bar Fangtasia, which was Sookie’s gateway into the vampire world.

The high point of this is that we get to see Eric rocking some serious 80s fashion, but we also get to meet a young Ginger, Fangtasia’s dimwit barmaid, and understand how she ended up like she did. Making Fangtasia the key location of this week’s flashbacks mirrors much of the present-day action, which revolves around that same bar; following the rescue of Holly in the previous episode, the gang waste no time trying to reverse the glamour cast by the Hep V vamps to hide their location and run a rescue mission to save Arlene and Nicole.

Key to not wasting any of that time is Sookie, who, far from wallowing in the death of Alcide, is keen to distract herself with a mission. Delivering blunt truths to everyone from Holly to Jessica seems like the best way to express her sadness. There’s also a vampire army to assemble, which means that that army needs to get its act together.

While Bill somehow retains the ability to glide through it all without displaying much upset (still maintaining some of his benevolent, omnipotent god-like status that he gained in the dramatic finale of Season 5), the other members of his gang have a few issues to work out. Jessica is still tearing herself apart over her murder of Andy Bellefleur’s daughters, translating that into a refusal to feed. Thankfully, this gives Lafayette something useful to do, after a bit of a dull start to the season, in a touching moment where the reason behind his erratic, drug-addled behavior is justified. It’s the few key moments like this in Episode 4, where we’re reminded of those who have been lost, that finally allow the action to give way to weary grief and let Sookie have the outlet she needs.

As these past characters return to remind us of what we’ve lost, it dawns on us just how many strong components the show has: aside from the comedic geysers of blood and plethora of Southern accents (as well as Pam’s one-liners), it’s the sympathy we come to feel for the characters, so strongly and ably portrayed by this accolade ensemble, that will make us miss the show and has kept us with it even through weaker seasons. But the pinnacle of that cast remains Anna Paquin, whose true range this week shines through. We have watched Sookie’s personal evolution from sweetly naïve to steely and severe, a measured and controlled performance that could, on many occasions, suggest a lack of empathy on the part of the character. But that is the power of Paquin’s performance – she brings to Sookie an incredible strength, the resolve of a less-than-ordinary girl thrown into an extraordinary set of circumstances and made villainess and pariah because of it. She may not have the kick-ass ability of a character such as Buffy (and the sexual content of the show would probably mean that any talk of empowerment get laughed off) but her determination, strong will and bravery make her a worthy heroine.