UK VOD TV review: Supergirl, Episode 7 (Human for a Day) | Where to watch online in UK | How to stream legally | When it is available on digital | VODzilla.co

How does Supergirl juggle her personal life and professional people-saving? After tackling that question, it’s only natural that CBS’ show should go on to ask a follow-up question: how would Supergirl deal with it all without her powers?

Yes, after last episode’s Rage Face, it turns out that Supergirl has used up her juice and is in sore need of some solar replenishment. She’s sun-burned-out, if you will. Which is, of course, bad news when an earthquake strikes, leaving the city to watch buildings topple and people get hurt – with no saviour to rescue them.

It’s perhaps the biggest-scale challenge Supergirl has faced yet – perfectly time for when her abilities are at their lowest. That means that the show gets to once again place its emphasis on the group; a sign that the programme is continuing to mature.

As with most TV programmes, the series is at its best when allowing its supporting characters to do something, especially when that something develops them as character. Supergirl’s flair for sidekicks, though, is rivalled by its flourishes of cheesy dialogue, which means that a subplot involving Alex threatens to unbalance the whole thing.

Alex finds herself dealing with another first for the show: a psychic villain. Jemm, one of the many prisoners from Supergirl’s Jail of Convenient Bad Guys, can control anyone’s mind and make them do Bad Things. It’s inevitable, then, that within 5 minutes of being introduced, he’s on the loose in the DEO HQ, sending everyone into a haze of distrust. On the one hand, it’s a neat premise, because it means that Alex’s trust issues with Hank become widespread among the team: nobody knows if anyone else is who they say they are. On the other hand, the on-the-nose script leaves Alex behaving recklessly for no reason just to set up situations in which she can defy, confront or question Hank. (If you were in an emergency situation, would you start quizzing your boss about your dead father?)

A similar obstacle faces Winn, who continues to take the show into love triangle territory, as he rubs the wrong way against James Olson. But if there are familiar flaws in Supergirl’s recipe – and let’s not forget that the same problems were rife in Arrow for the first season – the overall result is one of the tastiest episodes yet.

That’s partly because of the ensemble approach: Cat gets the standout speech halfway through, as she reaches out to National City to remind them ordinary people can be heroic without needing Supergirl, the polar opposite to Maxwell Lord, who argues that the city uses her like a crutch and she’s no good to anyone. That means Cat can be a hero, by offering a beacon of optimism (if there were an Emmy for Most Feel-Good Show, Supergirl would surely be top of the list), Winn can be a hero, by fixing the broadcast system at CatCo to broadcast Cat’s message, and James can be a hero, by, erm, taking his top off.

But it’s also because the show uses this whole situation to develop Supergirl as a character too. She has to accept that she can’t do everything, yes, but that’s a lesson she’s already learned. The nice touch here is that her being rendered powerless is exactly what she’s been yearning for the whole time: she wants to be normal. In the hands of the ever-sympathetic Melissa Benoist, that conflict is beautifully realised. The question of whether she’ll be recharged again isn’t the driver of the narrative – a lesser show might leave it there. Rather, the plot’s big reveal is that Cat’s message applies to Supergirl too. Even without super powers, Kara can still be hero. Seven episodes in and Supergirl is still a little wobbly in the air, but you can bet it manages to lift the spirits of the patient audiences still tuning in.

Supergirl is on Sky 1 every Thursday at 8pm. Don’t have Sky? You can watch Supergirl online (live and on-demand) through NOW, as part of a £7.99 monthly subscription. The VOD service also includes The Walking Dead, The Flash and American Horror Story: Hotel. 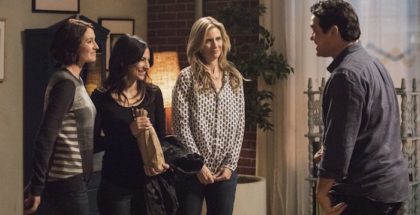