TV review: Penny Dreadful Season 2, Episode 3 (The Nightcomers) | Where to watch online in UK | How to stream legally | When it is available on digital | VODzilla.co

Did we mention Eva Green?

“You have to name a thing to make it come to life,” said Vanessa Ives in Episode 5 of Penny Dreadful Season 1. It was an hour that proved the show wasn’t just about vampires and things that go bump in the night, placing the entire narrative on hold to explore Miss Ives’ past. Three episodes in to Season 2 and creator John Logan has done it again with another spellbinding flashback.

“Let me help you. Tell me what’s going on,” says Ethan Chandler (the endearingly earnest Josh Hartnett). But that’s all the wolfy action you’re getting this week, because his wish is all Vanessa needs to take us back to a time somewhere before the first season.

It would be easy to complain of another flashback devoted to Miss Ives, but The Nightcomers proves that there is no such thing as too much Eva Green. She remains fascinating to watch, even when not saying anything. Her face seems to permanently express the torment of being caught halfway between heaven and hell: her pale skin scared and her eyes vivid and alert. Vanessa already knows she’s different at this point, but she’s afraid of the reason why, despite the fact that this mystery defines who she is. And so she visits “The Cut-Wife”, a witch famous beyond her tiny village for her power to give unofficial abortions… and more besides.

It’s not the first time we’ve heard the phrase “witch” this series and it’s a treat to find that this strange woman has a connection to the three nightcomers who so terrifyingly tore apart that carriage back in Episode 1.

The fact that this episode has a bearing upon the events of the present gives it an underlying tension, as we spot the foreshadowing of various objects – a book of the dead here, a bloody scorpion there. But it’s strength lies in the fact that, really, it could almost be a standalone tale.

That’s because Logan’s script spends almost the entire time inside The Cut-Wife’s home, simply leaving his two characters to talk. Patti Lupone is wonderful as the witch, backing up her scary credentials after a stint in American Horror Story Season 3. She easily goes toe-to-toe with Green, who has dominated the screen so much in this show, a prospect made even more interesting by the fact that neither clairvoyant needs exposition-heavy dialogue to discover the other’s secrets.

Rather, it’s down to the Cut-Wife to help Vanessa uncover her powers herself. There’s a whiff of training montage about the whole affair, but the two actresses waft it away with their pungent presence. Green remains tortured yet determined, not shying away from her first taste of blood or death; Lupone is knowing and, if anything, even more frightened than her pupil. Do not speak the Devil’s language, she cautions or “soon it will not be your mouth, but his”.

They both deliver their antiquated dialogue with a quiet relish, but their whole body language is used with each sentence. There’s a fire behind both their eyes that makes them equally formidable and likeable. Lupone is so intense that she never even seems to blink; an alarming trait that she carries right up until the end of the episode. Their increasingly unimpeded sight brings with it a shared understanding of their own inherent darkness. “You think you’re a hero,” snaps the Cut-Wife, when Vanessa tells of how she’d sooner save Mina than save local girls from unwanted pregnancy. “None of us are.”

Game of Thrones veteran Brian Kirk, who gave the BBC’s Great Expectations such a cinematic atmosphere, directs the two-hander with an absorbing, shadowy intimacy – a low-key confidence that makes sure the shocks still come, even if they’re not of the freaky voodoo doll variety. The suspense instead stems from the eternal question both face of whether to go to the proverbial dark side. Even the enchanted boundaries of the home mean that monsters cannot interrupt the bond forming between our pair, as they wrangle with the dilemma together, turning over Tarot cards and dealing with unexpected visitors. The villagers, tellingly, spit on them with disdain, before coming crawling back later at night for help; no matter how much the shadow is despised by the light, one cannot exist without the other.

What emerges is a gripping, moving tale of kinship that could almost serve as a pilot for a longer Cut-Wife movie, or spin-off show – even as the chapter concludes with the focus firmly on Miss Ives. You have to name a thing to make it come to life, she taught us last season. The Nightcomers names the darkness within Vanessa, but also brings to life a new, more sympathetic side – and, as the devil’s hunt for Miss Ives continues, acts as a lingering reminder that there are good witches as well as bad.

– The Cut-Wife deciding to go to the light side, while her sisters (including Madame Kali) fell to the dark side, is as tired as cliches get, but when you have people like Patti and Helen McCrory acting out the cliches, they sizzle brilliantly.

– “Little Scorpion” might be the strangest nickname ever given to a pupil.

– “The Devil’s language. It’s a seduction,” said Patti’s witch. It’s one of many quotable declarations that made up the episode’s script, but never was it better demonstrated than the scene on the house’s doorstep, as Madame Kali used the Verbis Diablo to draw her estranged sister towards her: the fact that she came so close to stepping over the magical, protective boundary of the outer walls is really quite disturbing. Seductive indeed.

– If there’s a weirder sight than Helen McCrory casually sauntering through a field of cows slaughtering them one by one, we’re yet to see it. (The fact that she just got the villagers to attack the Cut-Wife anyway just makes you feel sorry for the cows.)

– Ok, so it was inevitable that the Cut-Wife would end up dying, but what a fascinating mentor she was – she might have been a bit Yoda-like, but she expanded the show’s mythology by miles.

– Best shot of the episode? Patti’s witch, as the oil dripped over her face before they burnt her. She didn’t even blink then. Blimey. Talk about being a professional.

– Who’s willing to bet we’ll see that black book of the dead – let’s face it, that’s what it is – again very soon?

– “When Lucifer fell, he did not fall alone,” warned the Cut-Wife in her final speech. “They will hunt you until the end of days.” Yes, it sounded like a cross between Star Wars and Lord of the Rings, but it sure as hell sent a chill down your spine. More reassuring was her final advice: “Be true.”

– Would any of these standalone flashback episodes work for the other characters? Ethan, perhaps, because there’s so much to discover. We’ve already spent more than enough time with Frankenstein, though – his incestuous love triangle will no doubt become a big part of this season – and Malcolm is already set for some back-story fun with Madame Kali, as she turns her seductive tongue to his moustache. Basically, Vanessa is the best thing about Penny Dreadful, right? 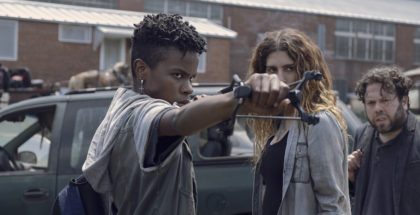