Netflix UK TV review: Trump: An American Dream | Where to watch online in UK | How to stream legally | When it is available on digital | VODzilla.co

A valuable reminder of the blustering tycoon's rise - and falls - on his way to the White House.

“If you could give Charles Foster Kane advice, what would it be?” “Get yourself a different woman.” It comes as no surprise that such an egotistical advice should come from Donald Trump. Or that the now President of the United States then goes on to talk about Citizen Kane, completely failing to understand the movie’s portrait of a tycoon’s rise and fall. Trump: An American Dream is a four-part documentary about the orange-skinned, strange-haired businessman, a portrait of a tycoon’s rise and fall – and subsequent rise.

Trump’s success is precisely that he’s managed to erase the part about the fall from his narrative – and this Channel 4 series does a fantastic job of dragging it back out into the open. For those hoping for an expose or a critique of the Trump administration, this will likely disappoint, but as a neutral account how this wheeler-dealer jumped from the world of business to the White House, Trump: An American Dream finds all the damning insight it needs in pure fact.

Trump has embodied many of modern society’s changing preoccupations, from turbo-capitalism to celebrity and reality TV, and the documentary’s simple structure – one episode per decade – forms a compelling chart of his calculated, chameleonic persona. We pick it up in the 70s, as he inherits his father’s wealth and starts planning for his own signature tower. In the 80s, that decadence got him into trouble, with a casino launch that was offset by an affair and trouble in his marriage. In the 90s, meanwhile, he found himself almost bankrupt, with scandals in the headlines bringing his empire down. It’s only in the 21st century that TV helped him on his path to Pennsylvania Avenue.

Each decade is full of fascinating tidbits that confirm all your suspicions about the man, as he repeatedly banks on the sheer power of hot air. All bluster and no substance, he obsessively focuses on success and wealth, never revealing how much he’s worth – because nobody knows – while insisting that he’s obscenely rich. Questioned in more detail about a casino going wrong, he simply walks away from an interview – a taste of the anti-media rhetoric he has since gone on to use to maintain a stream of propaganda as President.

Most revealing is how he slips from falsehood to falsehood in another news interview, again relating to his casino businesses. In a conversation littered with deliberate errors and lies by his interviewer, Trump doesn’t correct the man asking questions, but instead incorporates each statistic into his own answers – something that “con artists do”, as they try to appear knowledgeable.

That translated into an approximation of someone who might be Presidential, suggests Randal Pinkett, former winner of The Apprentice, who highlights the vital role the reality show played in Trump’s campaign. He’s “a poor person’s idea of what a rich person is like”, notes Pinkett, with his fixation on gold and flashy buildings – all surface for the sake of surface. The Apprentice, he points out, helped to redefine Trump for a generation who didn’t have a memory of the 1980s, and could therefore overlook the financial failings that he has tried to sweep under the carpet.

Other talking heads include Trump’s campaign adviser, Roger Stone, who lives up to his serpentine reputation, but the fun lies in them often watching the archive footage at the same time as us, prompting candid reactions to seeing Trump in action – reactions that are mostly laughter and horror. What happens now that this man is in the Oval Office? That’s the subject of another documentary, but for those who aren’t familiar with the President’s pre-White House career, Trump: An American Dream is a valuable reminder that the man who talks big deals and great success has rarely enjoyed either, and, as it closes on his ascension to power, leaves its title ringing ironically in your ears.

Trump: An American Dream is available on Netflix UK, as part of an £9.99 monthly subscription. 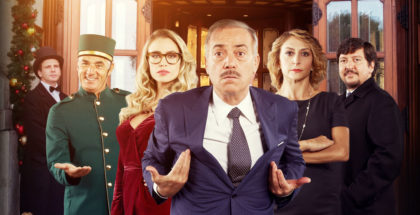