Netflix UK film review: War Machine | Where to watch online in UK | How to stream legally | When it is available on digital | VODzilla.co

Brad Pitt is on brilliant form in this entertaining, if uneven, war satire.

“He was like a throwback to another era.” That’s how Glen McMahon (Brad Pitt) is introduced to us, as he swaggers into Afghanistan airport at the start of War Machine. It’s a loud, confidence entrance from a loud, confident man – and little wonder, given that Pitt marks the first global mega-star to front a Netflix original movie. An A-lister leading a satirical war film undermining US foreign policy? Two years after the project was first announced, like McMahon, War Machine’s reputation certainly precedes it.

McMahon, of course, isn’t a real military officer, but it’s no secret that he’s very closely based on one: General Stanley McChrystal, who was shipped into Afghanistan in 2009 to reverse the deteriorating situation, as part of President Obama’s new administration. But there’s a crucial disjunct in their overall strategies: the US ultimately wants to remove and reduce troops on the ground. McMahon? He just wants to win.

Brad Pitt is brilliant as the absurdly over-assured officer. Loved by his men almost as much as he loves himself, he’s an American army hero. He barely sleeps, runs seven miles every morning and only eats one meal a day. He’s a man’s man. A General’s General. A man’s General’s man General. Pitching his performance somewhere between Burn After Reading and Fury, Pitt is gruff, dedicated, ruthless and possesses absolutely zero self-awareness.

The problem is that David Michod’s film doesn’t always know what to do with that. It’s happy for him to gurn and grunt for laughs, but also happy for him to grimace increasingly as the film goes on, slowly realising that he’s facing an impossible task with no support. The result is uneven in tone, in a way that, say, In the Loop, Three Kings or Four Lions aren’t – and when it comes to satirising war, precision is the key to striking your target.

The movie is narrated by Sean (Scoot McNairy), a journalist sent from Rolling Stone magazine to profile “The Glenimal” – and whose article and ensuing book in real life (the reporter’s actual name was Michael Hastings) form the basis of this film’s script. That means everything is presented from the perspective of someone who knows that McMahon is doomed to fail, a cynical voice that clashes with the movie’s attempts to humanise Glen. Are we meant to laugh at him or feel sorry for him?

There’s an interesting nuance to that grey area, an awkwardness that’s apt for a story about an overseas military force that is equally confused, but War Machine never quite finds its footing to really explore such territory. At one point, McMahon is interrupted mid-speech by a German politician (Tilda Swinton), who explicitly questions Glen’s awareness of what he’s doing, and whether his own desire to win is overruling the national needs of Afghanistan and the USA. It’s a clunky mission statement from a one-scene character that only emphasises how much the screenplay is grappling with how to portray events. One violent sequence halfway through leaves the comedy behind for action out in the field, as a group of soldiers (including one notably played by Will Poulter) find themselves hurting as much as helping – a detour that feels like it’s from a completely different film.

The supporting cast, tellingly, are never developed more than the cursory introduction we get from Sean in the opening montage. Anthony Michael Hall’s angry second-in-command and Topher Grace’s slick public PR guru make an impression, but none of them feel like actual people. Even a cameo from McMahon’s wife (Meg Tilly) carries little significance, while an amusing turn by Ben Kingsley as Afghanistan’s leader, Hamid Karzai, spends what little screentime he has sneezing and hiding away in his room – strange behaviour that goes completely unexplained. Is it real? Fake? Or just a joke in itself?

These missteps are reinforced by the fact that our narrator doesn’t turn up until the second half of the film – just in time to see McMahon’s outfit drinking and slagging off Obama, which sealed McMahon’s fate as a disgraced former rock star. In some of these latter moments, there’s a clear direction from the screenplay, one that occasionally sharpens to a scathing point – one scene in which we learn that Afghanistan grows poppies for heroin in its fields because US law prevents it from growing crops is laugh-out-loud, provocative stuff. But that lucidity is relatively rare. Thank goodness, then, that Pitt is at the front of the frame to keep us entertained – no mean feat, given how un-outrageous he now seems, compared to the US political figures currently in the White House.

We know that “The Big G” is driven, but not really by his brains, that his mouth often runs away from his head, which is quickly drowning in waters deeper than he expected. Is he the eponymous machine of war, or just a cog produced by an engine that keeps on powering forward? Glen sincerely seems to believe that the counter-insurgency tactics to win the hearts and minds of the locals will work, despite evidence to the contrary. Most of all, though, there’s the one question that Sean asks at one point: “What the fuck was he doing speaking to a Rolling Stone journalist anyway?” We never really find out, and perhaps that’s the problem.

Like a well-researched magazine feature, War Machine tells us what it’s going to tell us, tells us, then tells us what it told us. Come the end credits, it never really manages to elevate itself beyond that opening observation. For Netflix’s biggest original movie since Beasts of No Nation, starring Idris Elba, that’s a disappointment. But with a budget of $60 million, an adult target audience and a complex subject matter, War Machine is a throwback in itself – to the days when traditional studios would be willing to take a punt on such productions (see also: Okja). The result is sadly scattershot, but the fact that the streaming service’s own motor is now up and running makes this a promising glimpse of another era: the future.

War Machine is available on Netflix UK, as part of an £9.99 monthly subscription.

Cannes 2017 reviews round-up: Good Time, The Beguiled, Happy End, How to Talk to Girls at Parties, The Double Lover 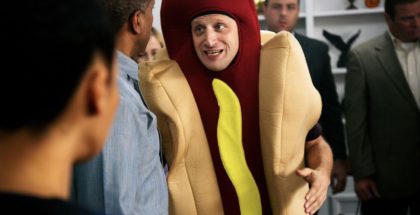