Netflix UK film review: Monty Python and the Holy Grail | VODzilla.co | Where to watch online in UK | How to stream 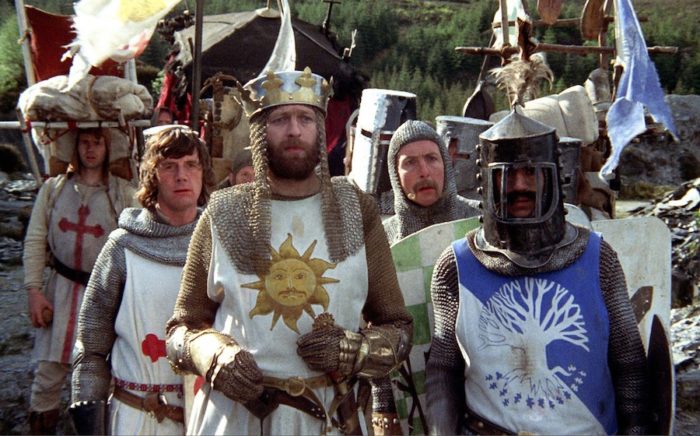 How do you bring a sketch show to the big screen? That was the problem facing Monty Python in the 1970s, and they responded with simplest solution they could think of: And Now for Something Completely Different, a feature-length compilation of re-recorded highlights from Monty Python’s Flying Circus. Monty Python and the Holy Grail, though, marks the point at which their ambitious stepped up a gear, as between Season 3 and 4 of their TV series, they began to write new material for an epic new film.

The premise was rooted in something as British as toast: King Arthur’s quest to find the Holy Grail. And the sketch troupe cover that toast with every single spread they can find. It’s haphazard, it’s silly, it’s chaotic, but most of all, it’s absolutely hysterical.

Chapman, naturally, plays our King, as he and his squire, Patsy, travel 932 AD Britain to form the Knights of the Round Table. Within minutes, we’re already firmly in Python territory, as his proclamation to be the rule of two mud-slinging peasants is met with a heated debate about the country’s system of government – the kind of preposterous bickering that can still be heard in Brexit-riddled Britain of 2018. But form his Round Table Arthur does, recruiting Sir Bedevere the Wise, Sir Lancelot the Brave, Sir Galahad the Pure, and Sir Robin the Not-Quite-So-Brave-as-Sir-Lancelot.

If you’re already giggling, that’s a sign of how engrained this film has become in popular culture – and, indeed, in national identity. After all, we might disagree over who’s in charge, but we can all agree to laugh at the French (who already have a Holy Grail), titter at the disruption of historical documentaries and guffaw at the sight of a killer rabbit gnawing at the blood-stained necks of its unwitting victims.

There’s everything on offer in the movie, from the Voice of God and songs about the cowardly Sir Robin (Eric Idle) to an animator who winds up having a heart attack and can’t complete a segment (Gilliam) and a stubborn Black Night, who won’t accept he’s lost a fight (a blusteringly good Cleese). There are sharp points made, such as a witch-hunting scene that ends up using a duck to determine whether an innocent woman (Connie Booth, of Fawlty Towers) should be burned at the stake, and a whole host of fantastical and historical tropes skewered – from bridge keepers and soothsayers to infamous castles and a wedding that even Game of Thrones would be impressed by.

But Holy Grail is more concerned with being daft than smart – it’s a film that perfectly demonstrates the group’s knack for over-intellectualising the most trivial of matters, with half the script consisting of dialogue repeated by someone else, but using longer words. The other half of the script is given over to such concerns as shubberies, which are demand by the intimidating Knights Who Say Ni (Michael Palin, deploying his wide-eyed facial expressions to laugh-out-loud effect).

It’s all assembled with an impressive blend of scale (the budget was $400,000, up from And Now…’s $80,000) and imagination (the same castle is used multiple times). That unending rush of imagination, ultimately, leaves the troupe unsure of how to stop, but if Holy Grail lacks the perfectly formed conclusion of Life of Brian, it makes up for it by being one of the funniest films ever made. Who cares about script and structure when you’re so busy laughing?

Monty Python and the Holy Grail is available on Netflix UK, as part of an £8.99 monthly subscription.