VOD film review: Beyond the Edge | VODzilla.co | Where to watch online in UK

VOD film review: Beyond the Edge

An inspiring achievement. An awesome spectacle. There’s no denying that the climbing of Everest in 1953 was an impressive feat. The same could be said of Leanne Pooley’s documentary, which meticulously recreates the mountain ascent to stunning effect.

The film is a patchwork of photos, archive footage and dramatic reconstructions of the climb – and the seams are invisible.

Kiwi director Leanne Pooley opts for a cross between a drama and a documentary to retread the footsteps of Edmund Hillary and Tenzing Norgay. It comes across as the right decision: where a fictionalised account might result in cheesy conversations between the men on the way up, here we only have their voices (and those of their sons) to give an insight into what’s on screen. The narration, cobbled together from interviews, is as close as you can get to a first-hand account of conquering the tallest chunk of rock on the planet; there are no talking heads to distract you from the physical and mental ordeal the men faced.

That attention to detail extends to the rest of the production team: DoP Grant Major captures the never-ending expanse of ice and jutting rocks on the Tasman Glacier in the Southern Alps, while Production Designer Richard Bluck (who’s worked on The Lord of the Rings) makes sure the costumes of the men playing Hillary and Norgay perfectly sync up with the photos.

The casting is equally, eerily accurate; Kiwi Chad Moffitt and Nepalese Sonam Sherpa are natural stand-ins for the pair. When Tim Woodhouse’s flawless editing cuts between the photos and the new HD video, you almost can’t tell the difference.

Pooley includes fragments of historical context, some of which drops off the edge of the frame without much impact. But the practical facts build up the immersive atmosphere, from the important decision of choosing the right oxygen tank to the suggestions sent in from people to help the expedition. “You could use helium balloons,” writes one, then adds: “You would need a lot of helium.”

It’s no spoiler to say that Hillary and Norgay succeed, but the movie rediscovers the power of what exactly that means – both for them and, unsurprisingly, for the nation of New Zealand. We seem them walking through super-imposed calendar dates, literally marking the pages of history. But where there could have been patriotic aggrandising, there’s no rush to analyse what happened next, no scientist or family member to describe the aftermath – there is just the climb. Accompanied by David Long’s rousing, drum-filled score, the documentary climaxes just as they reach the summit; a jaw-dropping peak for both form and content.

An inspiring achievement. An awesome spectacle. There’s no denying that the climbing of Everest in 1953 was an impressive feat. The fact that you can say the same about Beyond the Edge is testament to how good it is.

VOD film review: Into the Storm

Triailer: Bob Weir documentary to premiere on Netflix in May... April 11, 2015 | Staff Reporter 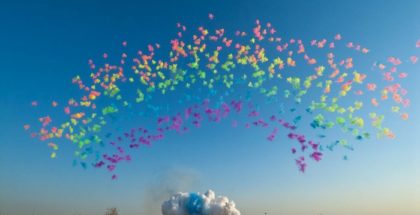