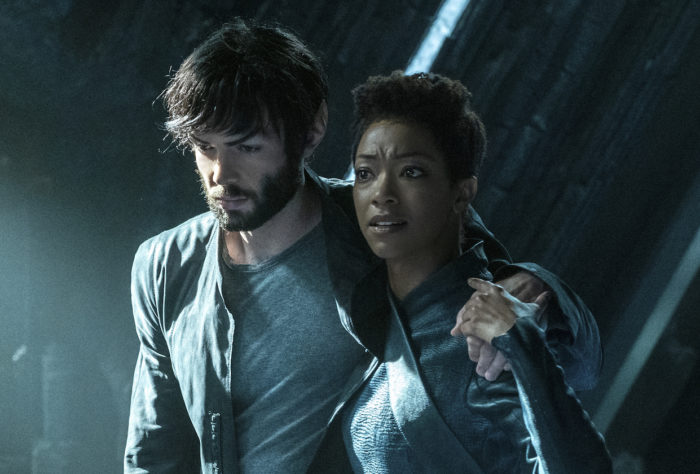 Discovery on the run

A fabulous episode, featuring great fan-service as the show’s pre-Kirk pilot collides with 2019.

After the last, distinctly average episode, Discovery is back on top form with an opening that features clips from the pre-Kirk Trek pilot, in which Leonard Nimoy’s Spock and Jeffrey Hunter’s Captain Pike first visited Talos IV. “Perhaps,” breathes Vina (Susan Oliver), “they made me out of dreams you’d forgotten.” “Squeeeeee!!!!” is, we believe, the approved fan-person response.

Tying Discovery firmly to the Star Trek’s beginnings has always been part of the show’s mission statement – they did, after all, create Michael, Spock’s previously unmentioned foster sister – and here they go even further. Though some die-hard fans will undoubtedly feel aggrieved that the writers are desecrating hallowed Trek ground, this is what the show’s always done. Section 31, featuring heavily this season, was an addition during the Deep Space Nine days, and TNG famously decided Klingons were now good guys with Cornish pasties on their heads.

The only criteria on which any creative decision should be judged is: does it work? And the answer is unequivocal: yes.

After the nostalgic clips remind us that Captain Pike fell in love, Tempest-style, with human refugee Vina, we’re catapulted to the ‘now’ of the show, in which Michael and Spock remain on the run, heading for Talos IV, and Captain Pike begrudgingly accepts orders from Section 31’s Leland to collect and collate all debris left over from last episode’s exploded shuttle, the hope being that signs of its time-traveling attacker can be found.

Pike and Michael are both given equal billing this episode, with the latter exploring her relationship with Spock. After zipping through a black hole – actually a defensive psychic projection emanating from the telepathic Talosians – they land on Talos IV. “We’re really through the looking glass now,” says Michael. Well, considering she and Spock both share a love of Lewis Carrol, she had to say it one day. Here, of course, it’s not just her and Spock she’s referring to – by episode’s end, the entire Discovery crew are on the wrong side of Federation law.

Approached by Vina (now played by antipodean actor Melissa George, best known to UK viewers as Angel in Aussie soap Home and Away), Michael learns that both Spock and Pike have been to this off-limits planet before. Spock, it seems, has picked Talos IV because their telepathic abilities will restore his mental balance – at least sufficiently for him to function. “The vulcan,” runs the Talosian diagnosis, “is experiencing time as a fluid rather than a linear construct.” This is going to take more than just lying on a leather couch and answering questions about his mother. In fact, Amanda doesn’t even come up. All Spock’s problems stem from Michael.

With persuasion from Vina, Michael agrees to view Spock’s memories, and she his. During a flash of his escape from the psychiatric unit – Alisen Down, the fiendish Olivia in the TV version of Twelve Monkeys, appears as his doctor – we discover that he employed only non-lethal force on his captors. And then we get onto the meat of it – the Red Angel’s first visitation to Spock as a child was to enable him to save Michael, running away from home, from death at the claws of a huge monster. He also reveals his attempts, when the Red Angel came stop him in later life, to mind meld with the entity, and announces that it’s human and, though hidden behind a near-impenetrable quantum field, “lonely”. Pike’s curtailed love for Vina – which is extremely moving, thanks to Anson Mount’s pitch-perfect performance – becomes intertwined with Michael and Spock’s activities on Talos IV, as Vina communicates with him via the Talosian’s mind powers in order to shake Section 31 off the scent. In a minor case of poor plotting – akin to Michael and Spock’s capture and quick escape last episode – this turns out to have no actual effect; when Discovery emerges in orbit around Talos, Leland’s starship is on their tail anyway.

But the bait and switch denouement is pleasing, with Leland thinking Pike’s allowing him to beam aboard Michael and Spock, when they are, in fact, merely projections created by the Talosians. Georgiou, who let Leland make his colossal error to undermine him, observes that the Talosians tried the same trick on her back in the Mirror Universe, her response being to eradicate the Talosians. (In the Federation universe, even Section 31 would consider that over-kill.)

A- and B-stories this episode come in the form of TyVoq and Dr. Hugh, who both have their own separate issues, but come together in the final act of their arc. Hugh remains understandably freaked out to find himself resurrected, and he takes his rage out on Stamets – it looks, for now, like the relationship is off. TyVoq, meanwhile, still has to earn the trust of the captain and crew – the brownie points he earned last episode erased by the sabotage of the spore-drive and encrypted messages sent to Section 31 under his log-in – and he finds himself confined to quarters. We know, or at least suspect, that TyVoq has been framed by an enemy agent – cyborg Airiam having been possessed by the Red Angel’s enemy (or should that be ally?) previously.

Hugh and TyVoq’s stories clash, literally, when Hugh demands for Tyler to bring out Voq, the Klingon inside him who killed Hugh. In front of the crew, a fight ensues, with newly feisty Saru declaring that the punch-up should go ahead as a form of therapy. He’s dressed down by Pike, but his strategy looks to have worked. Hugh and TyVoq have a lot in common – both having experienced traumas unusual even for the Star Trek universe. “I don’t know who I am anymore!” cries Hugh, to which TyVoq’s growled response is: “Who do you think you’re talking to?” Here’s guessing that Hugh’s newfound empathy leads to him aiding the incarcerated TyVoq in the future…

Back to Michael and Spock. In return for peeking into his mind, Michael allows him to see into hers. The reason for her rejecting him with a particularly hurtful “I don’t want to be around you – you weird little half-breed!” was actually to protect him and the rest of the family from the logic extremist terrorists. Despite the fact he tells Michael he’s not here to absolve her, you get the impression that, actually, he’s taken the first step on the road to forgiveness (which still begs the question why, in the Original Series, the motion pictures and during his appearances in TNG, Spock never once mentioned his sister).

There’s some warmth redeveloping too, with Michael’s exasperated response in the face of Spock’s logic recalling Doctor McCoy. “Is there a valuable question in your arsenal?” Spock witheringly asks her. “Yes,” Michael shoots back. “Do you actually think the beard is working?”

Which brings us to a problem. It’s not just the hairy face, but Ethan Peck’s Spock just isn’t on a par with Leonard Nimoy or Zachary Quinto’s fabulous recreation in the Kelvin Timeline movies. He so far lacks gravitas, and fails to get the right level of sardonic po-faced weariness that makes Spock so endlessly entertaining. He comes close at the episode’s close, when asked by Pike if that’s a smile on his face. “I believe it is,” he replies, giving us at least a taste of the old Spock. So, there’s most definitely hope. And, story-wise, the show continues to ramp up the stakes – if this episode, and all but one of the season so far, is anything to go by, then there’s some fabulous episodes of Trek coming our way. Discovery as an outlaw ship facing down a threat to wipe out all sentient life in the galaxy? Yes, please.

Star Trek: Discovery is available on Netflix UK, as part of an £8.99 monthly subscription. New episodes of Season 2 arrive weekly on Fridays, within 24 hours of their US release.

Morse will return to ITV for Endeavour Season 7