With Netflix, Amazon, MUBI and more all taking to London’s Leicester Square to showcase a diverse range of films, we head to the London Film Festival to review the latest films – and TV shows – either looking for distribution or heading to a streaming service near you. 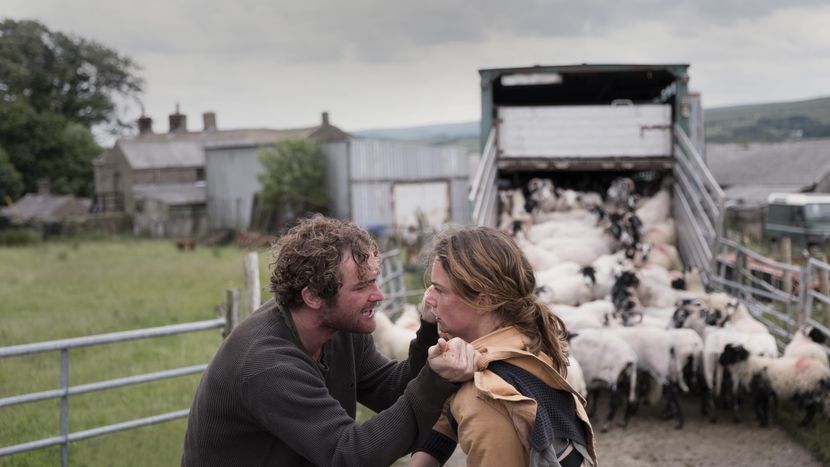 Clio Barnard is one of the most exciting and talented British filmmakers working today. Dark River sees her move away from the raw naturalism coaxed out of non-professionals actors to work with recognised screen names, but the result has no less intensity or emotion. Inspired by Rose Tremain’s book, Trespass, it stars Ruth Wilson as Alice, who moves back to her family farm after her father dies. Trying to reclaim the estate, while struggling to reconcile with her volatile brother (Mark Stanley), the result is as much horror story as it is family drama, as the ghost of traumas past haunt Wilson’s expressions, as well as the harsh rural landscape. Barnard is an expert at drawing strong, evocative performances from her cast and that same understated pain and vulnerability is unabashedly on display from Wilson and Stanley, creating a moving study of unspoken grief and aggressive denial. Backed by the BFI, you can expect it, like A Selfish Giant, to premiere day-on-date on BFI Player and in cinemas. Either way, make sure you seek it out.

Apostasy. The act of refusing or rejecting a religious belief. Debut director Dan Kokotajlo captures the full potency of that word in his remarkable first feature, which is set within a close-knit Manchester community of Jehovah’s Witnesses. It’s a world where The Truth is raised above everything else – and the people doing the raising are uniformly men.

Kokotajlo, an ex-Witness himself, focuses on three strong women within this sexist church environment: 18 year-old Alex, who lives with the shame of a forbidden blood transfusion when she born, which kept her alive, and her sister, Luisa, and mother, Ivanna. When Luisa is expelled, Alex’s devotion is put to the test, and Kokotajlo’s tender, detailed script explores the strength of the ties between the trio, as Ivanna tries to do what’s right and Luisa tries to maintain the emotional connections that are just as vital for a happy life. Presented without music and in a stark 4:3, the result is a powerfully honesty study of religious loyalty and family loyalty, one full of mute promises, quiet compromise and silent regret. Who does the apostasy refer to? Is it the sinful Luisa? The elders of the church, who abandon their Christian duty of support and forgiveness? Or the church itself? Performed flawlessly by a committed cast, this is a complex, challenging and deliberately ambiguous piece of cinema. Apostasy will be released in 2018 by Curzon Artificial Eye. Expect a potential day-and-date release in UK cinemas and on Curzon Home Cinema.

ACT UP. It’s a verb, as well as a noun, and Robin Campillo’s portrait of the AIDS activist group in the 1990s embraces both meanings of the word with a pounding, stirring energy. Throwing us into the movement’s machinations, it’s a visceral combination of the personal and political, a portrait of young people racing to beat the illness that threatens to kill them, both for the wider population and for each other.

Campillo gives us the time to get to know the group, particularly newcomer Nathan, who forms a romantic attachment to veteran Sean, who speaks out at the back of each meeting – and there’s a tender heart to those interactions that underscores the very human cost of the illness. He balances that with a keen understanding of process and democracy, as the activists balance their urge to make a difference with the vital question of how to actually achieve that goal. Antoine Reinartz is superrb as Thibault, the de facto leader, who has to put on a smiling, encouraging face even when he’s heartbroken, even when all his friends want to do is run riot and paint the Seine red.

A fictionalised counterpart to David France’s powerful documentary How to Survive a Plague, which chronicled ACT UP’s work in the USA, this is a richer work, which empathises with activism in every aspect, and embraces the importance of discussion and education – one scene where they invade a school to hand out informative leaflets is a rallying, convincing call for having these conversations at a young age to prevent any further victims. One final act feels too long, after a sad gracenote halfway through, but it’s worth it for the sight of the group in the streets crying for more volunteers and more action. Dazzlingly edited and intimately performed, 120 BPM is an intellectual drama, a political thriller and a living tragedy – a cinematic experience that leaves your heart racing way above the average.