From Netflix’s Outlaw King, Roma and The Ballad of Buster Scruggs to Amazon’s Life Itself and Suspiria, the big VOD players are all rolling into town for the London Film Festival this October. We head to Leicester Square to round up the highlights from this year’s event:

From dodgy disco sets and unrequited romance to financial debts and departing uncles, this is wickedly entertaining. Read our full review

Water water everywhere, so why hasn’t anyone made a film about it before now? Russian director Viktor Kossakovsky gamely steps up to the fawcett to rectify that oversight, and the result is a staggering piece of cinema that’s equal parts bewildering, bewitching and beautiful. Kossakovsky travels the globe to piece together his experimental artwork, featuring everything from waterfalls to sub-zero rivers and rampaging floods. With no dialogue, narration or vox pops, the result recalls Baraka and Samsara as a documentary that plays out like the world’s biggest screen saver, but Kossakovsky finds patterns and rhythms in his watery oddysey; we move, slowly, from the perilous cracks of frozen ice to flowing oceans, then to destructive storms that whip mist above the drowning ground beneath – and as we see the element move through its stages from solid to gas, the film builds a current of tension and release, refuge and danger. There’s terror in seeing people fishing cars out from Russia’s Lake Baikal, wonder in the rainbows that form in the air as our camera dives off the edge of Venezuelan cliffs, excitement in the rush of wildlife through the sea, and in between it all, amazement that humans manage to exist alongside this magisterial force, last captured with such gob-smacking scale by Chasing Ice. With a pounding soundtrack to drive this mesmerising montage in its most intense moments, you’ll full in and out of the current – the secret is to go with the flow.

The Old Man and the Gun

After the transcendent beauty of A Ghost Story, David Lowery slows down for this slight but splendid caper. The old man in question is Forrest Tucker, a bank robber who has lost none of his charm, cockiness or criminal drive, even in his later years. Robert Redford is perfectly cast as the suave thief, strolling into banks with a seasoned twinkle, old-school manners and a grandad-like smile – before whipping out a pistol and asking them (politely) to give him all their cash. He doesn’t fire the thing; after all, who would say no to Robert Redford?

His three-man crew earns the nickname The Over-the-Hill Gang and he embraces the chance to get one last stab at notoriety, one more cat-and-mouse chase with a detective (in this case Casey Affleck’s determined John Hunt). But the real fun comes when Redford shares the screen with Sissy Spacek as Jewel, a horse-riding widow who clicks with the similarly lonely old-timer. Lowery shoots their romance, and the heists (and prison breaks) that punctuate it, on a lovingly fuzzy 16mm, wrapping this low-key thriller nostalgia to match its leads’ golden Hollywood charisma. For all involved, it feels like an easy ride down a road well travelled; hop in, let the top down and enjoy the breeze gently float by.

The Old Man and the Gun will be released in UK cinemas on 7th December 2018. 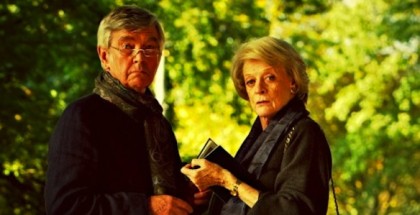