VOD film review Black Bear | Where to watch online in UK | How to stream legally | When it is available on digital | VODzilla.co 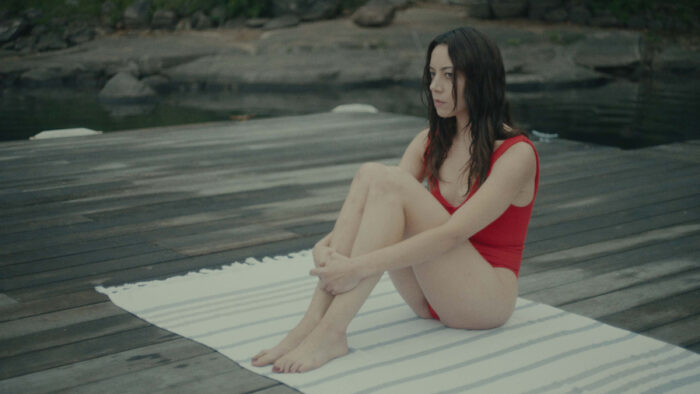 Aubrey Plaza is terrific as a creatively blocked filmmaker in this engaging and thought-provoking indie thriller.

Whenever an actor plays a creatively blocked writer in a movie, that’s usually a sign that you shouldn’t entirely trust the subsequent story that unfolds. That’s doubly true in Black Bear, an engaging and intriguingly structured indie thriller from writer-director Lawrence Michael Levine that cleverly riffs on the artistic process.

Aubrey Plaza plays Allison, a filmmaker who’s come to a remote lakeside lodge in the Adirondacks to work on some ideas for her next film. After spending time meditating down by the lake, she returns to her room and begins to write, whereby a handwritten caption reads: “Part 1 – The Bear in the Road.”

The film then seemingly flashes back to when Allison rented the lodge from its live-in owners, Gabe (Christopher Abbott) and his heavily pregnant wife Blair (Sarah Gadon), whose already fragile relationship is tested to breaking point by Allison’s presence. However, just as things are reaching a dramatic climax, the entire situation abruptly changes (shades of Mulholland Drive) and we get “Part II – The Bear by the Boat House”.

The logical conclusion is that both Part 1 and Part 2 are Allison’s film ideas, but the script smartly leaves the audience to decipher the film for themselves. Reading between the various lines, it’s clear that Allison is married to – or in a relationship with – someone who also works on her films and both stories explore the complex emotional battleground that results from that collaboration. (It seems prudent to note that Lawrence’s own filmmaking wife Sophia Takal also co-starred alongside him in his previous films.)

All three actors are superb, with Plaza in particular delivering some of her finest dramatic work to date, particularly in the second half where’s she’s basically on the verge of a nervous breakdown. Similarly, the film does a terrific job of creating a believable on-set atmosphere, capturing not just the behind-the-scenes gossip, but the functional hierarchy, the chaotic-yet-creative energy and the collective mixture of sadness and relief as the film reaches its final day of shooting.

Though not explicitly a comedy, the film does have its darkly funny moments, whether it’s caustic lines of dialogue (a Plaza specialty) or on-set shenanigans. There’s strong emotion too, and the film is particularly scathing about manipulative behaviour within relationships.

Ultimately, this is an engaging and thought-provoking examination of the emotional toll inflicted by the artistic process. It also represents a significant step forward for Lawrence as a writer-director and it will be interesting to see where he goes from here.

Black Bear is now available on MUBI UK, as part of a £9.99 monthly subscription.

Where can I buy or rent Black Bear online in the UK?

Google Play shifts to YouTube for smart TV and Roku