First look UK TV review: Vikings Season 5 (Episodes 1 and 2) | Where to watch online in UK | How to stream legally | When it is available on digital | VODzilla.co

“The King is dead. Long Live the King,” declares Bishop Headmund (Jonathan Rhys Meyers) in Season 5 of Vikings. That the History channel’s drama has even got to a fifth season speaks volumes about the show’s ambition, largely driven by writer Michael Hirst. He’s always been concerned with inheritance, legacy and history, widening the series’ scope to look to the future and to foreign shores. Ragnar Lothbrok was the epitome of that globe-trotting ambition and drive, so it’s with some trepidation that the series begins its new season, its first proper run since Ragnar popped his Viking clogs. That trepidation, though, turns out to be all on us: judging by its opening double-bill, Vikings is more confident than ever.

The loss of Ragnar is doubly daunting, given that it also means the loss of his wonderful nemesis, King Ecbert, but Hirst’s scripts make the smart decision not to try and move on from their gripping rivalry and instead tackle it head on, turning the whole show into a drama about people trying to move on and fill that void. With any power vacuum, though, comes violence and competition – and Vikings quickly reminds us of just how many people there are lining up to get their piece of the pie.

Bishop Heahmund is the biggest new addition to the cast, and after his brief appearance at the end of Season 4 doing all manner of sinful things, you could be forgiven for expecting Rhys Meyers to bring some Tudors-worthy trashiness to the ensemble. But the former heartthrob king brings some welcome complexity to the fanatical priest, who is brutal with a sword, but also conflicted about his mortal missteps – we see him offer communion to women in private, but his most heated moments involve chastising himself in private and praying for forgiveness. He also helps to bring out the best in King Aethelwulf (Moe Dunford), who was always playing second fiddle to Ecbert in Season 4, both in the power and characterisation stakes. Judith remains the strongest part of the Anglo-centric narrative, but the prospect of her meeting Heahmund and the triangle that may evolve out of her husband’s alliance has huge potential.

Potential, of course, is what the sons of Ragnar are dealing with, as they each try and find their individual way to inherit their father’s legacy. Bjorn, the first-born, proved himself a leader last season, but it’s Ragnar’s thirst for adventure and sailing that he has really taken after, and so he continues his Mediterranean journeys without his brothers. Ubbe and Hvitserk remain the least developed of Ragnar’s sons, but Season 5 does well to start redressing that balance, particularly for Jordan Patrick Smith’s Ubbe, whose cool, calm presence conceals genuine prowess on the battlefield.

Ivar, though, is the undisputed star of the show, and Alex Høgh Andersen has done marvellous work to steer himself into inheriting the central lead role vacated by Travis Fimmel. We already knew of his brutality, and his unhinged violence gets new lease here, as he leads a raid on York to stake claim to a piece of England in the name of the Norsemen.

Never letting his disability stop him from riding in on a chariot or clutching onto some homemade crutches, he’s a compelling presence with a genuinely intimidating air – it’s no surprise that his brothers fall into place behind him, as he begins to act as the assumed head of the Viking troops. (It’s a nice touch that almost all of their conversations mention their father at some point, as they struggle to get from under his shadow.) What’s most surprising and disturbing, though, is that he’s not just hot-headed: he’s logical and methodical, shrewdly finding ways to outsmart opponents time and time again. It’s not that he’s the most confident of Ragnar’s sons, but that he really is the best suited to be his heir.

The heir of Kattegat, meanwhile, is another matter entirely, as we see Halfdan return to bring Lagertha the news of Bjorn and the men’s success against King Ecbert. Peter Franzén does an impressive job of re-establishing himself as a villainous figure, as he clearly has his own motivations (let’s not forget that he previously commissioned a man to attack Kattegat and seize it for him). That he’s potentially driven by the love he has for the woman who demanded him to be King of Norway only adds to his layers of intrigue.

And going toe-to-toe with him every step of the way is the fantastic Kathryn Winnick, who remains one of the reasons Vikings has succeeded for so long. Heading up the female-led community of Kattegat, Lagertha chats openly with her fellow women of authority about how retaining power doesn’t just require power but also brains. Her unfolding power struggle with Halfdan is disturbing, provocative, satisfying and gripping, as unexpected twists and turns repeatedly steal away the ground from under your feet – and, perhaps for the first time, there’s even the feeling that Lagertha’s days in power might be numbered. It would be a shame to see her check out from the show, especially now that Ragnar is no longer there to define her.

What makes this season’s start really promising, though, is the addition of real depth to Ivar: he begs Floki (who, after the death of Helga, has nothing left to keep him with the others) to stay, rather than sailing off alone, on a journey of discovery, and their interaction is the first sincere display of non-malicious emotion from Ivar. Scary, sweet and more than skilled at serving up the action beats necessary to keep fans happy, Season 5 of Vikings is a reassuring demonstration that the show has find the rightful man to lead the show into an ambitious future, one that openly embraces the same old issues of family, treachery and discovery but with a host of new faces. The king is dead. Long live the king.

Vikings: Season 5 is available on Amazon Prime Video, as part of a £5.99 monthly subscription. New episodes arrive every Thursday, within 24 hours of their US broadcast. 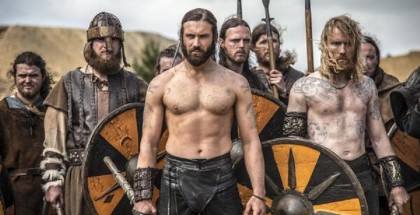