First look UK TV review: Magpie Murders | Where to watch online in UK | How to stream legally | When it is available on digital | VODzilla.co

Anthony Horowitz's entertaining crime drama is as smart as it is playful.

There are only five letters separating “Magpie Murders” from “Midsomer Murders”, which might well leave some viewers skipping past the detective drama when compiling their watchlists, but Anthony Horowitz’s knowing puzzle-box of a series is a delightfully distinct creation.

The series is an ambitious juggling of murder mystery conventions, playing out, perhaps, like Britain’s answer to Only Murders in the Building. Our detective? That depends on which story you’re following: the legendary sleuth Atticus Pünd (Timothy McMullan), who is investigating the death of Sir Magnus Pye, or Susan Ryeland (Lesley Manville), the editor of the Atticus Pünd novels, which are written by novelist Alan Conway (Conleth Hill) – who has just died in real life.

Anthony Horowitz’s 2016 book has been adapted by Horowitz himself for the screen, and he chops it up so that the two storylines unfold in tandem with each other – a decision that sounds like a disorienting challenge but one that draws out the witty storytelling within each, as we move from the actual present day to the fictional 1950s, with characters in one timeline echoed in the other.

Director Peter Cattaneo does a deft job of blending and separating the two strands, leaning into the soft nostalgia and bright colours of the period setting – complete with gorgeous costumes and props – and giving Lesley Manville’s Susan enough space on the screen in the present to feel increasingly out of place. The editing uses sound and match cuts to take us between the two worlds, which gradually threaten to intrude upon one another.

All this would be glossy surface without the substance of the script, which keeps things playful but complex enough to compel. But it’s the cast that really pull the threads together, from Daniel Mays as a policeman doubly outwitted by the external sleuth on his turf to Matthew Beard who most memorably appears as Conway’s lover, James Taylor. Conleth Hill, meanwhile, is having a ball as the author, whose poison-pen novel gives him great satisfaction to hammer out, as he uses every character to wreak revenge on someone in his life. Did the acerbic writer fall off the tower in his Suffolk estate or was he pushed? You wouldn’t bet against the latter.

But this is Lesley Manville’s show, and she grounds Susan’s quest to unearth not only the circumstances behind Conway’s death but also the missing final chapter of his book – and the closer she gets to the answer, the more we see of McMullan’s impeccably tailored Pünd, and not always in the places where we expect. The result is a detective series that manages to be fun as well as smart, fresh as well as familiar and – with ITV deciding to present it as a BritBox original in the UK – has its own home miles away from Midsomer Causton.

The Book of Boba Fett review: How Boba lost his groove

Why The Salisbury Poisonings should be your next box set... June 14, 2020 | Ivan Radford 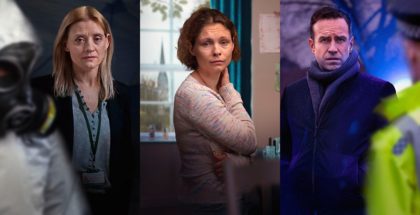