First look UK TV review: Slow Horses | Where to watch online in UK | How to stream legally | When it is available on digital | VODzilla.co

Why you should be watching Avenue 5 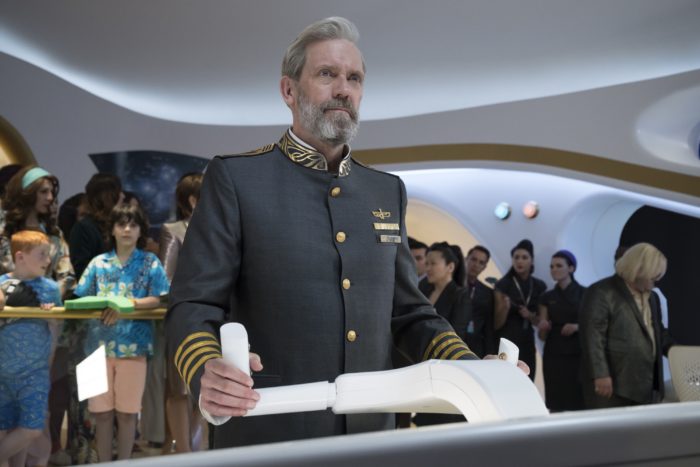 Season 2 premieres on Sky Comedy on 30th November 2022. This review is based on Season 1.

Armando. Iannucci. Two words that are guaranteed to get any comedy fan’s attention. Space tourism? Not so much. But Avenue 5, a sitcom set on an intergalactic cruise ship, finds the Veep and Thick of It creator on firm footing.

The show unfolds 40 years in the future, when traveling the solar system is no longer the stuff of sci-fi fantasy, but a booming, multibillion-dollar business. Hugh Laurie stars as Ryan Clark, the suave captain of the luxurious liner, who has been beamed aboard for some star power: he’s famous as the hero of Avenue 3, a ship that would’ve been destroyed were it not for the captain. Well, him and sprinklers. And the paramedics. And everyone else on board.

It’s not long until we begin to realise that Captain Clark’s confident facade is precisely that, and the real Ryan is entirely clueless – and, just like that, we’re back into familiar Armando territory. There may be no Politics at play here, but his knack for capturing the absurd incompetence of humankind is as hilariously precise as ever. Whether on our planet or many light years from it, people can always be relied upon to mess up at the worst possible opportunity. And so it is that the ship Avenue 5 finds itself off course, its gravity flipped and all its passengers faced with many more months left on their voyage until they get home.

What might be a satirical survival horror in other hands here becomes a lightweight crucible for everyday foibles that is no less sharp in its observations; the question is less whether there’ll be enough food to make it back and more whether these entitled holidaymakers can resist killing each other before they do.

Among the spoiled guests are Andy Buckley as a put-upon husband – whose bickering with his soon-not-to-be-wife is like watching a rom-com written by Malcolm Tucker – Ethan Phillips as Spike, a washed-up astronaut, and the always-excellent Rebecca Front as Karen Kelly, a take-no-prisoners loudmouth who doesn’t hesitate to put herself in charge.

On the bridge? Josh Gad as billionaire Herman Judd, the owner of Avenue 5, Suzy Nakamura as his right-hand-woman Iris and Lenora Crichlow as engineer Billie McEvoy, the only likeable (and intelligent) one who actually knows what’s going on.

They’re a nicely balanced ensemble, when not floating through the air or colliding with the polished surfaces, with Gad amusingly blustering and idiotic as the overbearing manchild tycoon. “Make the restaurant red. We’ll sell more steak that way,” he barks at Iris. “That’s science, probably.” Zach Woods steals every scene he’s in as Matt Spencer, the head of customer relations who couldn’t hate customers more. “I’m a nihilist,” he informs one customer as they complain at him. “No you’re not,” they retort. “Whatever,” comes his apathetic reply.

And in the middle of it all is Laurie, who relishes the chance to play a goofball after years as Dr House, sending his deep American accent up as something used to reassure guests. Even his hair and uniform (more of a costume) look intentionally fake, while the ship’s glamorous opulence is wittily filmed by rising star DoP Eben Bolter to look slightly artificial and shallow.

The cast all share screentime and one-liners, making for an entertainingly chaotic jumble of jokes. If that means Avenue 5 sometimes feels like it’s lacking initial direction, you soon forget it due to the sheer number of gags crammed into every fame. “Love seafood? Come to our restaurant for all-you-can-eat lobster,” declares Matt in one of the countless background ads that always raise a smile. “Allergic to seafood? Then get the hell away from the restaurant.”

Peppered throughout the 30-minute silliness is the fact that the moon has been turned into a prison, the question of how heavy a coffin should be and one person’s conviction that all music is bad. All these questions and concerns go unaddressed because, as Armando sees the world, nobody ever listens to other people, even while they’re trying to slingshot around Saturn. It’s a salient point, one that recalls the final act of Pixar’s WALL-E, and means there’s certainly scope for serious subject matter in the show’s future episodes, from climate change to capitalism. But Avenue 5 doesn’t need to be groundbreaking to simply be very, very funny. And judging by the first two episodes, the laughter count isn’t about to come crashing down to Earth anytime soon.

Watch: New trailer for To All the Boys sequel 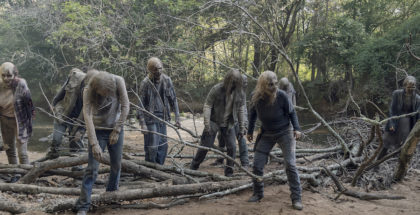