Catch up TV review: Taskmaster S12, The Great British Bake Off, All Creatures Great and Small S2 | Where to watch online in UK | How to stream legally | When it is available on digital | VODzilla.co 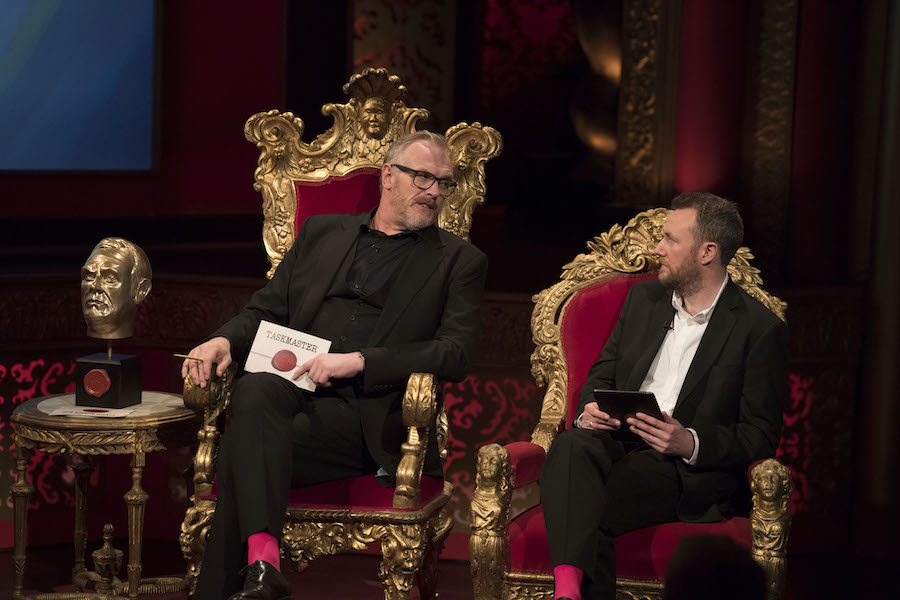 Another autumn, another chance to watch six celebrities make fools of themselves on national television, as they try to carry out pointless tasks to impress a bully and his timid sidekick. That’s the formula for Taskmaster and, 12 seasons in and a switch to Channel 4 later, the producers know not to mess with it – it’s one of the most enjoyably pointless things on TV right now, a blast of absurdity that makes for joyous distraction from life. Greg Davies and Alex Horne are a superb double-act, always finding new ways to insult each other with a strangely sincere affection, and the tasks themselves are commendably silly – from trying to pop a water balloon with a rubber duck (a mainstay Taskmaster tool) to chasing Alex around the house with a ball. But the show lives and dies by its choice of contestants and, while Season 12 doesn’t quite have the tear-inducing hysterics of Daisy May Cooper, it’s a combination that already has chemistry and laughs aplenty – from the perpetually chucklesome Alan Davies, immediately outing himself as the middle-aged, tired one, the savvy Desiree Burch and the amusingly eccentric Morgana Robinson to the go-for-broke Guz Khan and the precisely pedantic Victoria Coren Mitchell. It’s worth tuning in just to see how much joy they get from chatting nonsense with each other while watching their pitiful attempts back on camera – the sight of them trying to aim while throwing forks is a bonus.

The Great British Bake Off: Season 5 (All 4)

The Great British Bake Off is another Channel 4 acquisition that smartly keeps its recipe the same from year to year. While previously the replacement of Sandi Toksvig with Matt Lucas led to a slightly cold vibe in the tent, this season sees him and co-presenter Noel Fielding focusing on supporting the contestants rather than trying to make jokes for the camera, and the result is funnier, and warmer, to watch. That reinforces the kind-hearted spirit that has always been the key ingredient to Bake Off’s charm, and the bakers respond accordingly, attempting in the opener to make identical mini rolls, tasty malt loaves and gravity-defying showstoppers. It means that when a cake does topple to the floor, we gasp with sympathy rather than pleasure – and when Paul Hollywood and Prue Leith compliment a chef on the flavours in their bake, we enjoy their surprise. As always, it’s hard not to pick favourites, and this year we’re rooting for Crystelle’s choice of ingredients, Freya’s enthusiastic creativity and Giuseppe’s imaginative flavours. Also Maggie, because she really does seem like Prue Leith’s cousin.

All Creatures Great and Small: Season 2 (My5)

Channel 5’s decision to bring James Herriot’s fastidiously British books to the screen once again more than paid off last year, with Season 1 of All Creatures Great and Small becoming its biggest hit since 2016. And so we return once more to the sunny hills of Britain for more human-and-animal hijinks. Those seeking gripping drama or modern themes won’t find much here, but there’s a growing confidence to the adaptation, bolstered by its reception, and a consistently sweet tone that makes for gently diverting viewing. We pick up as a farmer warily permits the training of a young dog that’s a little too excited by sheep, and as an elderly woman’s beloved pet bird is in a perilous position. Nicholas Ralph leads the cast with charisma, while the low-stakes plotting is just the thing to avoid getting indigestion while watching after your Sunday roast.