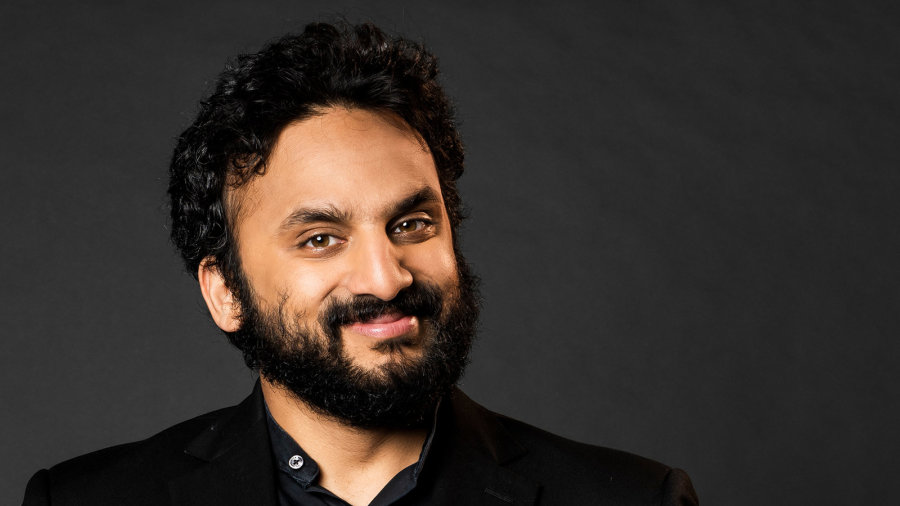 It’s the same old story. Apparently controversial figure is cancelled from their broadcaster, only to turn up on a different network without an apology. Except this time it’s Nish Kumar and the Mash Report team, and their return to our screens is a welcome one. The satirical comedy series was put out to pasture by the BBC this year, to “make room for new comedy shows”, at a time when the Beeb was facing bizarre accusations of being too left-wing. Whether or not the two were connected, UKTV has made the smart decision to commission a new series from the team, in what could turn out to be the perfect thing to fill the Taskmaster-shaped hole in its schedules. And so Nish Kumar, Rachel Parris, Steve N Allen and Ellie Taylor are once again in a studio together as they offer up shrewd commentary on current events, mixed with playful fake news headlines. If that doesn’t sound very controversial to you, that’s because it isn’t, but it’s funny, still feels fresh alongside Have I Got News for You?, and gives Kumar and Parris a welcome platform for their razor-sharp wit. They’re joined, pleasingly, by the right-leaning Geoff Norcott, who points out that he doesn’t need to be there because the show’s not on the BBC anymore – “I’m here because you want me here,” he smugly declares. He’s right – and the same applies the whole group. A section dubbed “The Fixer”, fronted by Fin Taylor, talks about putting words into action to solve problems, but the question now is whether Late Night Mash can lean into its new TV home and go one step further into bolder territory.

In 1999, Paul Greengrass directed The Murder of Stephen Lawrence, a docudrama about the death of the young boy in a racially motivated attack while waiting for a bus in Eltham. To compound the tragedy further, Stephen’s murder was only the start of a long campaign for justice, as the Lawrences ultimately fought for a public inquiry that exposed the institutional racism at the heart of the Metropolitan Police that meant the police failed to convict the culprits. We pick things up in 2006, a heart-wrenching 13 years after Stephen’s death, as cop Clive Driscoll (Steve Coogan) takes on a re-investigation of the case to do it the right way. Written by Frank Cottrell Boyce (Hilary and Jackie, Millions, 24-Hour Party People) and Joe Cottrell Boyce (Treasure), the script chronicles the events with sensitivity and a deep understanding of the pain and frustration felt by Doreen Lawrence (Sharlene Whyte) and Neville Lawrence (Hugh Quarshie). Whyte is impeccable as Stephen’s mourning, determined mother, while Quarshie, who played Neville in the 1999 drama, is remarkable at tapping back into the father’s bemused, weary anger. Played with a delicate understatement by all involved, the result is a serious, reflective piece of TV that reminds us how sadly relevant Stephen’s story still is, even though it’s one that ultimately ends in hope. All three episodes are available on-demand.

After teaming up with racing driver Billy Monger for a thoughtful exploration of what it takes to be an athlete in the Paralympics, Jonnie Peacock is back for another moving Channel 4 documentary to accompany the broadcaster’s coverage of the Tokyo tournament. This time, Peacock turns coach for five young amputees, helping to train them in running on blades. It’s one thing to compete, it’s another to coach, and Peacock proves that he’s got the warmth and mettle to do both. He’s an inspiring and encouraging figure here, even as the coronavirus pandemic interrupts the training camp plans and leads to him recording exercise routines on his phone and schooling them remotely. But as much of a national treasure as Jonnie undoubtedly is, the documentary’s strength comes from the way that it shines a light on the youngsters taken under his wing, as they each excitedly gets scanned with the latest tech to work out what they need to do to move more smoothly – whether it’s one focusing on not swinging his leg out to one side or another practising walking backwards so they can trust in their prosthetic to push forwards at more of a pace. Whether or not these kids grow up to be the next Paralympics heroes of Great Britain doesn’t matter – you can see them growing in confidence over the course of a year, and that itself makes for winning TV.

It’s been almost a decade since The Last Leg first began on Channel 4, as a show to accompany the Channel 4 coverage of the Paralympic Games in 2012. Host Adam Hills, who was born without a right foot, was joined by Alex Brooker, who had his right leg amputated when he was a baby. Joined by Josh Widdicombe, a token white able-bodied bloke, the result was a trio that delivered updates from the days events with a frank, dark sense of humour that was surprising then – and remains just as surprising now, as they head to Tokyo for nightly updates throughout Japan’s hosting of the Paralympics. What’s fantastic about the show, and testament to its success, is that it books Paralympic athletes as well as comedians, and that inclusive attitude – an inspired counterpart to the programme’s blunt commentary about everything from news to politics – leaves the show with a warm note of hope at the end of each instalment. That’s even more the case when doing what the show was born to do: support the Paralympic Games, which it does not only with sporting updates but with a typically irreverent approach to every event, as roving reporter Rosie Jones heads out to Tokyo to cheer people on – and, in one hilarious stunt, deliver a marriage proposal to Hannah Cockcroft in front of her boyfriend. It’s funny and uplifting stuff – and will live on in its usual weekly slot in a few week’s time. All of which means you can fully expect it to be around in four years’ time once again.