Catch up TV review: Ackley Bridge, The Voice Kids, Big Brother UK 2017 | Where to watch online in UK | How to stream legally | When it is available on digital | VODzilla.co 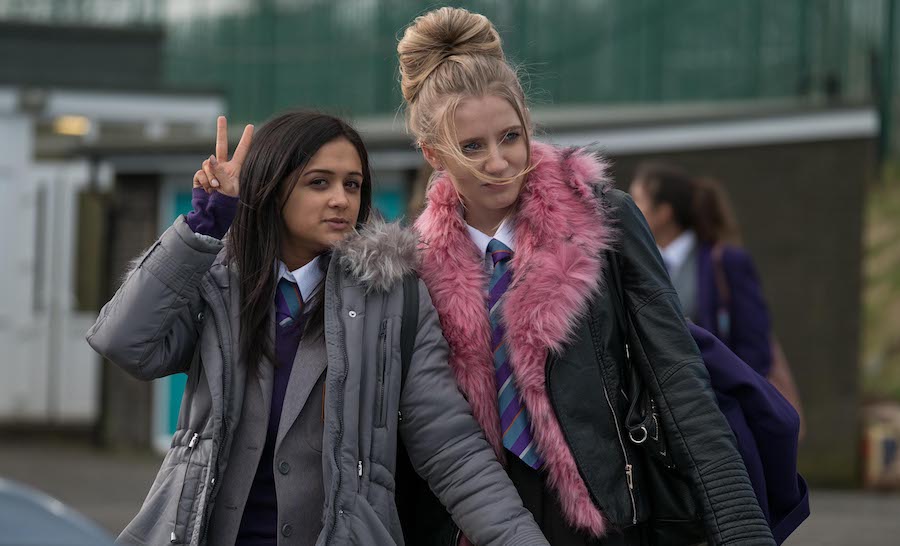 “It doesn’t matter if you’re white or Asian. There’s no jobs for us, we’re all going nowhere. We’re the immigrants, the benefit scroungers.”

That’s the message delivered by Ackley Bridge, Channel 4’s new drama about two schools merged together to form an academy. One, a Muslim school. The other, a typical white comprehensive. Together, they form a message coalition of chaos, as cliques clash with cliques and prejudices linger on both sides of the blackboard. In the middle of it all are BFFs Missy (Poppy Lee Friar) and Naz (Amy-Leigh Hickman), whose friendship is driven apart by their individual group’s inability to bridge the racial divide. They go from drinking cider in a skip after school to shouting in the playground. It’s troublemaker Jordan who winds up reaching the above conclusion, after spreading hateful messages and taking over the school’s PA system.

If that sounds like a perceptive bit of teen drama, you’d be right – so it’s a shame that Ackley Bridge doesn’t quite live up to its potential, due to a host of stereotypical characters elsewhere, particularly in the form of disorganised teacher Miss Keane (Liz White, doing her best with the role) and her daughter, who messes up her mum’s life royally within an episode. The cast do well, from the kids to Paul Nicholls as a PE teacher (married to the head, as part of an all-too-familiar love triangle), but Ackley Bridge lacks the subtlety to really ring true, despite its commendably good intentions to tackle an important subject. As far as school dramas go, it’s an A for effort, but a C for attainment.

Why do people watch reality talent shows? The answer, for the most part, is cruelty. For all the talk about inspiring us with examples of people achieving their dreams, The X Factor, Britain’s Got Talent and their ilk tread a little too closely to exploitative territory to really prove uplifting – we may cheer on a success one week, but really, people are waiting for the chance to laugh at the failures, while the record companies cash in on anything they can. It’s no wonder, then, that this whole segment of event TV has seen its ratings slide over the years.

ITV’s incarnation of The Voice, poached from the BBC, has done well to keep things largely likeable and friendly, with Will.i.am providing the charming, upbeat heart of the judging panel. But that oddly proves the weak spot of this new kids’ version of the show. A child-centric spin-off of the format is a commercially smart idea (or would have been, five years ago). But with a rejigged judging trio that now includes the oh-so-gentle Pixie Lott and Danny Jones from McFly (his career advice: be cheeky and make it fun and everyone will love you), the result is rather dull and tame, as contestant after contestant are almost unanimously given the white buzzer/revolving chair signal to go through from auditions. In which case, what’s the point?

United Kingdom of Big Brother (My5)

Big Brother is back. Yet again. And this year, it’s embracing the times by taking on a Brexit theme – and running with it as far as possible. That means we get a house that has been redecorated as “Big Brother Village”, complete with a tearoom for a kitchen and a sweet shop hangout. And, into the fray, the show is launching a “People’s Housemate”, Tom, voted for by the public out of a panel of three potential housemates. He gets to communicate with the outside world via Facebook Live and decide who can have citizenship in the Big Brother Village – leaving those he excludes up for eviction.

That’s a fairly neat spin on what is now a very, very old format, and it suggests that the series is attempting to go back towards the social experiment tensions that made its initial runs so novel and compelling. But the mix of housemates is a boringly samey as ever. Despite superficial attempts to mix things up, with two sisters, a mother and daughter, and a mixed-faith married couple, many of them are the usual array of young, good-looking people with little personality – including a former Ex on the Beach contestant called Chanelle, whose response to being called “loud and annoying” is to simply scream at Tom and walk off.

Host Emma Willis, who does a game job of stepping into Davina McCall’s shoes, opens the season with talk of the recent terror attacks and how this incarnation of Big Brother is the perfect response, as it brings a nation together and focuses on unity by inviting contestants into the house from all across the country. It’s tenuous at best and cynical at worst, but either way it doesn’t ring true – and within hours, the whole thing has descended into the trashy tedium of all those years past. One two-faced contestant from America, Raph, says he plans to play strategical games based on his knowledge built up over years of watching the show. The most unbelievable thing about him, though, is that anyone could still be tuning in. Channel 5 deserve credit for managing to resurrect Channel 4’s dead horse and make some success from it, but surely, it’s time to stop flogging it?