Batman: The Animated Series: The 10 Best Episodes | Where to watch online in UK | How to stream legally | When it is available on digital | VODzilla.co

Batman: The Animated Series (1992 – 1995) is routinely praised as being one of the best animated TV shows ever made, as well as being the all-time greatest adaptation of the character. Developed by animator Bruce Timm, and writers Paul Dini and Mitch Brian, the series was enormously successful, becoming the starting point for the continuity of the entire DC animated universe, with Timm’s distinctive character designs establishing a signature look for everything that followed.

Drawing on both the Tim Burton Batman movies and Max Fleischer’s acclaimed Superman cartoons from the 1940s, the show is notable for being adult-oriented, yet still appealing to young audiences. The writing is consistently mature in tone and the stories often address complex themes. Similarly, the creators brought an exceptional level of quality to every aspect of the production, from the outstanding voice work to the film noir and Art-Deco inspired aesthetics and visuals (dubbed “Dark Deco”) to the phenomenal orchestration.

Debuting in 1992, the show originally aired on Fox Kids, with a total of 85 episodes. Although subsequent Batman cartoons followed after the show moved to the WB Network in 1997, these 85 episodes are considered the original run. In tribute to the recent death of beloved Batman voice actor Kevin Conroy (aka The One True Bat-voice), and in honour of the show’s 30th anniversary, we hereby present the 10 best episodes of Batman: The Animated Series. Actually, they’re almost all brilliant – there’s only one sub-par episode in the entire 85 – but these are our favourites.

Note: For the purposes of clarification, the episode numbers below refer to the production order, rather than their original airdates.

Pretty Poison depicts the origin story for Poison Ivy, voiced by Diane Pershing. When Bruce Wayne’s (Kevin Conroy) best friend, Harvey Dent (not yet Two-Face), is poisoned, Batman investigates his girlfriend, Pamela Isley (looking like a 1940s pin-up), and discovers her secret identity as plant-manipulating Poison Ivy. The look of the episode is genuinely beautiful, closely approximating Fleischer’s 1940s cartoons and doing magnificent things with the colour red in the final act. Action highlights include Batman fighting off a giant Venus Flytrap and there are lovely touches of humour, such as the fact that Pamela has a fragrance called “Rose from the Dead”.

After a series of bombings hit Gotham City, Bruce realises that they are similar to a plot in an episode of The Gray Ghost, a TV series he idolised as a kid, so he tracks down the show’s now-retired actor Simon Trent (played by former Batman Adam West) to help him solve the crime. The episode is both a touching nod to West’s iconic Bat-performance and an acknowledgement of other key Bat-influences like radio thriller The Shadow (created two years before the Caped Crusader), as indicated in the scene where Trent sees the Batcave and recognises it as a duplicate of The Gray Ghost’s lair.

Knocked unconscious while chasing some crooks, Batman wakes up in an alternate universe where his parents are still alive, the Batcave doesn’t exist and he’s happily engaged to Selina Kyle (Adrienne Barbeau). But there’s still a Batman, so what’s going on? Inspired by a 1991 Detective Comics story (Identity Crisis), this is a superbly scripted episode that digs deep into Bruce / Batman’s psychology and strikes a profound note of sadness at the realisation that family tragedy is part of what makes Bruce Batman in the first place. Notable action highlight: the visual of Bruce Wayne fighting Batman.

See also: Dreams in Darkness (Episode 28), a visually inventive, film noir-esque episode in which Batman and ends up in Arkham Asylum and hallucinates after being exposed to Scarecrow’s fear gas.

Once you get past the talking cat people, this is a creepy and fun episode that owes a significant debt to The Island of Doctor Moreau. Selina / Catwoman is kidnapped by mad scientist Doctor Emile Dorian (Joseph Maher, playing it like Peter Cushing), who intends to create a mate for his cat-like man Tygrus (Jim Cummings) by mutating her into an actual cat woman, with a tail and everything. The ending is surprisingly poignant and there are some nice little character details (keep an eye on Garth the Ape-Man, as well as some excellent sound design, particularly when things start exploding.

See also: The Cat and the Claw (Episode 15), which introduces Selina Kyle (along with her scene-stealing cat, Isis) and establishes the ongoing romantic connection between Catwoman and Batman.

Widely regarded as one of the best episodes of the series, Almost Got ‘im features a group of Batman villains (Joker, Penguin, Two-Face, Killer Croc and Poison Ivy) sitting around taking turns discussing the time they came closest to killing Batman. Featuring great character work, inventive storytelling and a killer twist that we won’t spoil here, this is an enormously entertaining episode that also throws in some thrilling Catwoman-in-peril action for good measure. It also has one of the best final lines of the entire series.

See also: A Bullet for Bullock (Episode 67), another episode based on a comics story, in which Batman has to investigate repeated murder attempts on Detective Harvey Bullock (Robert Costanzo).

Scripted by Paul Dini (who co-created the character of Harley Quinn for the show, with Bruce Timm), Harley and Ivy is a thoroughly entertaining story that’s notable for being the first episode to introduce the idea of Harley Quinn (Arleen Sorkin) and Poison Ivy being both partners in crime and best friends (and maybe more), a legacy that continues in the current Harley Quinn TV series. The episode features the pair meeting up and beginning their own crime spree, annoying Batman and The Joker (Mark Hamil) in equal measure. It is, of course, filled to the brim with Girl Power, right up until the inspired ending.

Having introduced the character of Barbara Gordon (Melissa Gilbert) in Heart of Steel (Episode 38), the show gives Batgirl her own origin story in this episode. When her father, Commissioner Gordon (Bob Hastings), is framed for bribery by gangster Rupert Thorne (John Vernon), Barbara takes the law into her own hands by dressing as Batman, who has mysteriously disappeared. Barbara / Batgirl became an instant fan favourite and featured much more heavily in future series, although making Batman her love interest was almost certainly a big mistake.

See also: Batgirl Returns (Episode 85), in which – yes! – Batgirl returns and teams up with Catwoman to solve a mystery while Batman is out of town.

The appeal of this episode can be summed up in two simple words: Robot Batman. This is a superbly written episode (Marty Isenberg and Robert N Skir), in which Batman comes face to face with his robo-duplicate, the twist being that Robot Batman believes it really is Batman. In addition to showcasing Kevin Conroy’s superlative robot voice work and giving us the glorious comic book spectacle of Batman vs Batman, the episode achieves real poignancy, as it explores the idea that a robot might actually have a soul. (Warning: prepare to cry robo-tears.)

When a large group of villains take control of Arkham, they capture Batman and put him on trial, forcing anti-Batman District Attorney – and Bruce Wayne’s current girlfriend – Janet Van Dorn (Stephanie Zimbalist) to defend him, against her will. Despite the fact that the legal proceedings are overseen by Judge Joker, the trial has a surprising outcome. Notable for featuring the most Bat-villains to appear in a single episode, Trial also finds something to say about the nature of crime and criminals, before ending with this note-perfect exchange: Janet Van Dorn: “I see now there is a need for the things you do, but I’m still going to work towards a city that doesn’t need Batman.” Batman: “Me too.”

See also: Harlequinade (Episode 72), which explores the Joker / Harley relationship, after she teams up with Batman and Robin when “Mr J” steals an atomic bomb.

This absolute belter of an episode plays out like a 1940s Saturday morning serial – a comparison made within the episode by Batman himself. Lured to Egypt, Batman and his lover, Talia al Ghul (Helen Slater), discover that her father, Ra’s al Ghul (David Warner), has summoned the ancient queen of Egypt, Thoth Khepera (Nichelle Nichols), who intends to drain his life essence. In addition to thrilling action – poisonous snakes, death traps, last minute escapes, you name it – and terrific voice work from its starry cast – David Warner is up there with Mark Hamil as one of the show’s best voice actors – Avatar also features the show’s animators at the very top of their game, from some wonderful shadow work to a dialogue-free opening sequence that’s shot in the style of a silent movie.

See also: The Demon’s Quest (Episode 60), which sees Batman and Ra’s al-Ghul teaming up after both Robin and Talia are kidnapped. 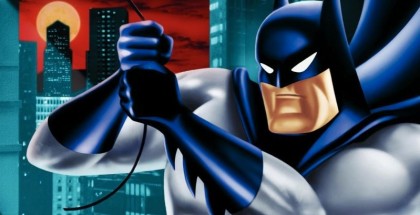