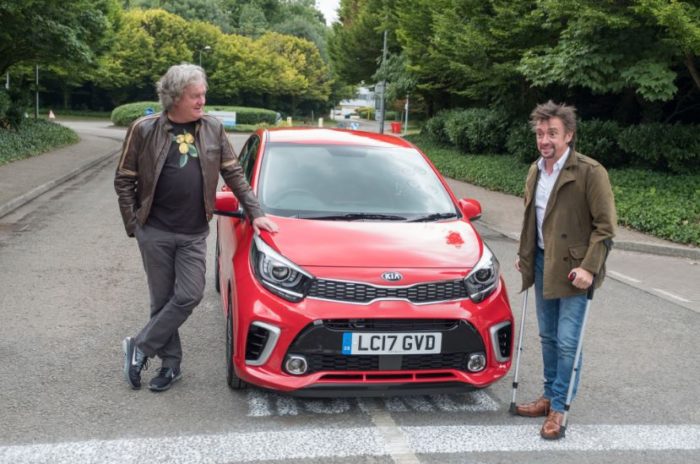 It’s taken a whole season, but The Grand Tour may have just found its top gear – in more ways than one. Amazon’s motoring series has often struggled to find its sweet spot between its own thing and rehashing the BBC show of old. Season 2’s opening episode seemed to confirm that the show had mostly reverted to the safe option of ground already well trod. But the third instalment of this sophomore outing – and, to some degree, its second – have seen the trio of Clarkson, Hammond and May finally work out how not to do Top Gear.

Chapter two rediscovers the group’s sense of genuine banter, after hours of forced and scripted exchanges. That mostly comes to the fore when Clarkson races the other two to Niagara Falls from New York – Clarkson travelling by Ford GT, Hammond and May by planes and buses. Hammond, however, has one slight disadvantage, in that he’s still on crutches after his close encounter with a Swiss cliff in Episode 1.

If Hammond’s accident was somewhat underplayed in the Season 2 opener, it’s milked for every last drop here, as May ferries about the limping Hammond with minimal sympathy and maximum mockery. It’s a surprisingly neat balance that the programme strikes, between allowing us to enjoy the somewhat mean slapstick – because this is Richard Hammond we’re giggling at, a man who has become increasingly unlikeable over the course of the show – and also sympathise with how hard it is to move around on public transport that isn’t designed for anyone with a physical impairment.

“Able-bodied people like to think that everything that could be done to make life easier and convenient for disabled people has been done, but, when you find yourself in that position, you realise it really hasn’t,” says Hammond, in an unexpected moment of awareness of other people – and it’s a human note that he so rarely strikes in The Grand Tour that you can’t help but be a little impressed.

You really can believe their slightly cruel taunting of each other, too, as it becomes increasingly petty – and that low-key banter (rather than scripted stunts and production jokes) continues in Episode 3, as the trio unveil their Christmas tree, nattily decorated in recycled car parts, and present each other with gifts. There’s the top with an X-ray of Clarkson’s pneumonia-ridden lungs presented by May, and a clock for Hammond, topped with a toy car that bursts into flames when the alarm goes off. (A cross made of headlights topping the tree, meanwhile, is wittily dubbed a big spoiler alert by May.)

James May, sorely needing more of the spotlight throughout Season 1, continues to get more screen-time this season. With Hammond incapacitated, he’s given the chance to test-drive a Kia Stinger GT in Majorca, and Captain Slow doesn’t disappoint – he races a gang of skateboarders through the winding Spanish hills, while delivering some actual car journalism with a jovial line in understated humour that shines every time he’s not having to play second fiddle.

Clarkson, meanwhile, heads to Saint-Tropez with a Bugatti Chiron. While he may not rival May for solo presenting quality, he does remind us how souped-up Amazon’s budget has become, setting off a dazzling sequence of shots through Europe’s glamorous celebrity playgrounds.

Speaking of celebrities, the decision to ditch Celebrity Braincrash continues to be more and more promising with every week, as the show wheels out two famous people in a similar professional arena for a Face Off that involves them both competing on the series’ gravelly track. If Episode 2’s pairing of cricketer Kevin Pietersen and baseball player Brian Wilson seems forced, though, Episode 3 doubles down with the partnership of Hugh Bonneville and Casey Anderson – one an environmentalist and the other the star of Paddington 2. The fastest man who lives with a bear? It’s exactly the kind of strained, trivial connection that works – and the dual interview format stops things getting too dull.

The most exciting celebrity reveal, though, is their replacement for The American. The Ebola Drome track may be the same, but the show’s new racing driver is anything but: they’ve got a woman to test their cars now, after she proved the fastest of all their auditioning drivers. It’s a refreshing breath of new air in such a testosterone-heavy programme – the only sad thing is that they don’t name her, in keeping with the tradition of The Stig. So we will instead: her name’s Abbie Eaton. And she’s awesome, as she puts a Mercedes GTR through its paces.

All of this, of course, is balanced out by politically incorrect and sexist comments from the trio, from Hammond branding Essex women “sex robots” and Clarkson making an appalling BLT gag. And yet, if that’s par for the course for the show’s fans, they all show a surprising amount of self-deprecation in the season’s third episode, as they decide to take a back seat entirely, letting normal members of the public steal the show.

The reason? Because Hammond and May are bored, while Clarkson is jet-setting across the continent. And so they invent a new sport: car park racing. Down to Dunstable the duo go, and they pit staff from Storage King and Cura Technical against each other in the roundabouts and roads that connect the buildings. Gavin from purchasing and Steve from sales (looking hilariously un-macho) do some fantastic driving, with cameras stuck everywhere to make it genuinely thrilling – and it’s even more so because we’re not watching the same old men behind the wheel. With Clarkson and May commentating on the sidelines, they manage to keep the show’s sense of humour, without it all being about them – just the right level of blokey car action, with none of the indulgence.

If that, plus Abbie Eaton, is a signpost for what’s ahead in this scaled-back season, The Grand Tour could be all set to drive in a promising direction – one that’s a lot like Top Gear… but just different enough.