And so The Grand Tour arrives at its grand finale. 12 episodes after its fire-spouting, budget-blowing opener, the news that Amazon’s motoring series would heading to Dubai for its last outing suggested another hour of the same. But “Past v Future” is a surprisingly understated affair – and all the better for it.

One of The Grand Tour’s biggest problems – and this is a season that has had problems – has been its indulgent streak. The extravagance of the United Arab Emirates, though, makes Clarkson, Hammond and May look like masters of restraint. Clarkson’s opening monologue, like his strongest introductions this season, focuses less on his controversial opinions and more on the place where the show’s tent has pitched up. In this case, we’re told about vending machines that dish out actual gold and insanely expensive police cars. (The towering, gleaming architecture in the background speaks for itself.)

It seems to inspire a renewed self-deprecating sense of humour in the trio, who are at their most effective when being British and middle-aged and knowingly pathetic, rather than smug and irritating. “For the first time,” quips Clarkson. “We are the poorest people in the tent.”

That spirit continues with Clarkson and May darting off to England for a showdown between a Volkswagen Golf GTI and an electrically-powered BMW i3. It treads familiar territory, but Clarkson ribbing May about being reimbursed £5,000 (now £4,500) by the government for buying an electronic vehicle over a petrol guzzler, and May slagging Clarkson off for once being paid by the government not to grow anything on his land, comes across as honest repartee between friends, as opposed to the forced #banter of the tent-based Conversation Street segments. Clarkson wrestling with Apple’s Siri-based CarPlay system is genuinely amusing – “I don’t understand what you mean by ‘Barry'” – while even Roger Daltrey makes an appearance without having to be killed off in a Celebrity Braincrash scenario.

When that segment does rear its head – featuring Formula One driver Daniel Ricciardo – a stunt with a hover car is at least colourfully over-the-top. But there’s no sign of The American (another of Season 1’s big flaws), with our time instead spent with James May doing another one of his bits where he’s forced to do things he doesn’t like. That previously resulted in Donutting in South Africa, one of Season 1’s standout highlights (despite being in the otherwise dire Episode 2), and Winching, the activity he tries here, is just as entertaining – mainly because it consists of people driving into muddy holes and trying to work their way out, which is a recipe for James May to fall over again and again in dirty puddles of water. And one thing James May is good at is falling over again and again in dirty puddles of water. (Here’s hoping the show gives him interesting escapades and mini-documentaries every episode in Season 2.)

Richard Hammond has been another of the series’ most notable weaknesses, as he’s attempted to craft some kind of goateed rascal persona who’s afraid of homosexuals and frozen dairy produce. But he’s thankfully knocked into place here, as he admits that he can’t actually drift a car, even though him being a presenter on Top Gear might have led you to believe otherwise. So he heads to France to learn how, and as he messes up repeatedly, he gets a chance to show some actual human characteristics – a welcome change to his fake, tedious edginess of earlier episodes.

The cameras make the most of it too, capturing some dazzling sequences of cars drifting across wet corners – a sight that’s only topped by another driver, Bartek Ostalowski, who, following an accident that took away his arm, uses his shoulder to help drive his car. Even Hammond is, for once, rendered speechless. (Imagine an episode where Bartek was the subject of a Hammond or May filmed segment.)

That kind of moment is what makes Episode 13 of The Grand Tour a hint of show that gets the balance right between, as the title suggests, past Top Gear and the trio’s future at Amazon. A final drag race between the Bugatti Veyron and Porsche 918 Spyder has an entertaining surprising winner, a reminder that The Grand Tour knows how to do car telly well. But after an uneven first season, and with the BBC’s rejigged Top Gear returning this spring, the jury is still out on who will end up in front after their second laps.

The Grand Tour is available exclusively on Amazon Prime Video, as part of a £5.99 monthly subscription – or as part of £79 annual Amazon Prime membership. For more on how to watch The Ground Tour, click here. 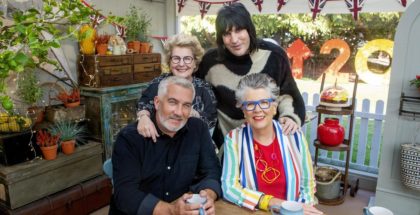