Amazon UK TV review: GRAND PRIX Driver | Where to watch online in UK | How to stream legally | When it is available on digital | VODzilla.co

“Over the next six days, testing goes from bad to worse.” That’s the sound of something going horribly wrong in Amazon’s new documentary, GRAND PRIX Driver – and it’s not until you reach the end of the series that you appreciate just how rare that is.

Amazon is rapidly cornering the market in the world of all-access sports programming, with its All or Nothing brand now expanding from the NFL pitch to the UK Premier League (a new show about Manchester City is in the works) and New Zealand Rugby’s All Blacks. While Netflix has signed a new deal with Formula 1 to follow the entire 2018 season for its own series, Amazon got there first with this unique, exclusive insight into the work behind the scenes at McLaren. But it’s only when you compare it Netflix’s recent football documentary, charting the pressure placed upon Italy’s Juventus, that you notice how different GRAND PRIX Driver is.

Access, of course, requires something in return for those giving it: big brands (and, make no mistake, modern sporting teams are commercial brands) are in the TV game for publicity. Netflix’s Juventus documentary has fantastic access to Serie A, but steers clear of any negative scandals or tough questions, resulting in a shallow portrait of a successful football club. GRAND PRIX Driver, on the other hand, finds itself in potentially hot water when it goes into the secretive world of Formula 1 – only to find McLaren’s efforts to bounce back from three tough years not working. Rather than brushing over the details, though, the series keeps filming.

The result takes us through every step of the F1 engineering cycle, as McLaren aims to be back on the podium and begins its preparations to do so long in advance of the 2017 season. We join rookie driver Stoffel Vandoorne, who is promoted to join two-time world champion Fernando Alonso on the starting grid – and they hone his car right down the millimetre, as they check how much elbow room his cockpits needs.

Once the new Honda engine’s in place, though, things go wrong once more, leaving McLaren with a weary team, nerves ahead of testing in Barcelona and a difficult professional relationship with Honda to navigate. All the while, Vandoorne has to get used to a gruelling PR schedule and the two bosses in the boardrooms have to work out the best way to keep the McLaren brand stable. The result is a surprisingly candid portrait of a racing giant drifting off course, brought to life with unrestricted footage that’s excellently edited together at a brisk pace. It’s narrated by Michael Douglas in slick, confident style, but there are awkward truths beneath the surface, crafting a compelling car crash (almost literally) that is guaranteed to grip F1 fans.

GRAND PRIX Driver is available to watch online on Amazon Prime Video as part of a Prime membership or a £5.99 monthly subscription. 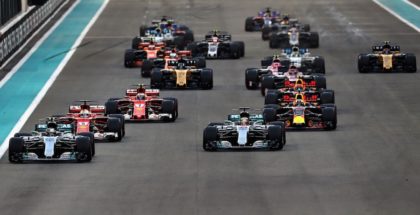