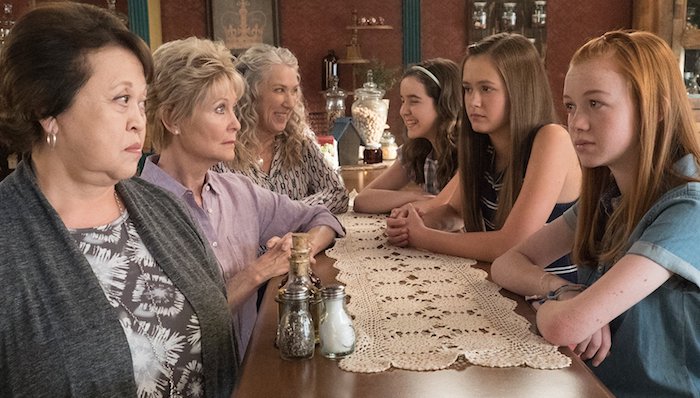 Three friends find a magical cookbook in Just Add Magic. The Great British Bake Off meets Buffy? That proved just the right mix for the first season of Amazon’s live-action kids’ series, which blended humour and heartfelt morals with charming performances and a whole lot of cakes. Now, Amazon serves up a second portion – and Season 2 is just as deliciously entertaining.

Season 1 saw Kelly (Olivia Sanabia), Darbie (Abby Donnelly) and Hannah (Aubrey K Miller) see what they could do with their new-found powers, seeming to lift the curses on their hometown of Saffron Falls, including the one that left Kelly’s grandma (the original owner of the book) in a catatonic state. If that might raise the risk of some heavy-handed sentiment, as Kelly and her and nan reconnect and she gushes about how good life is, never fear: writers Joanna Lewis and Kristine Songco waste no time in adding a fresh sprinkling of peril.

That primarily comes in the form of Chuck, a boy who spelled trouble for Nana Becky (Dee Wallace) and her friends, Gina Silvers (Ellen Karsten) and Mama P (Amy Hill), when they were younger. Chuck, who appears to have once stolen Mama P’s magic seed (still missing now they’re pensioners), was magicked away by the trio back in the 1960s – but when Kelly and co. seem to save the day, they inadvertently bring him back.

He’s a fantastic addition to the cast, as it soon becomes apparent that he’s got amnesia – rather than a sinister adult, this bad guy is still a young boy who thinks he’s in the 1960s. That means there’s loads of fun to be had, as Zach Callison’s delightfully deadpan dude swaggers about like Danny Zuko in Grease, using words such as “groovy”, while the girls attempt to give him a modern makeover and teach him terms like “Snapchat”. But his arrival also brings suspicion and danger, as the older women don’t trust him one jot, and Chuck begins to have flashbacks, suggesting that it’s not long until the truth comes spilling out – scenes in which he hangs out with Kelly’s dad, Scott (the amusingly clueless Andrew Burlinson), and chats vinyl are a nicely seasoned balance of suspense and silliness. 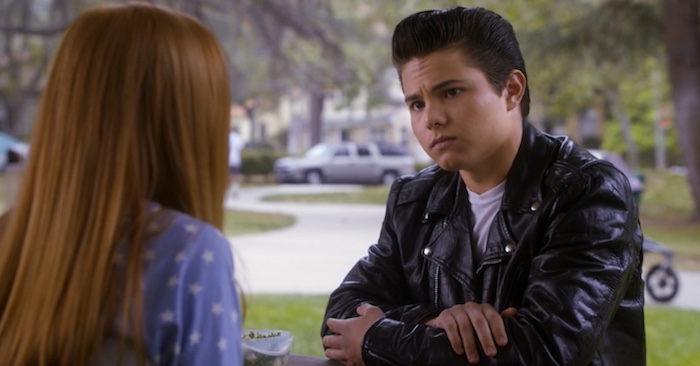 This slight darkening of the series’ tone is just what Mary Berry ordered, as the show evolves alongside the girls’ understanding that their actions carry consequences. That’s partly achieved through the ongoing theme of truth, as the show subtly relies on spells that act as lie detectors or “beef settlers” to draw out unspoken feelings; where once the magic food was primarily a source of jokes, here, they’re used as smart ways to allow characters to voice their inner conflicts. It’s testament to the cast that they do this with a chemistry that feels effortless; Sanabia’s Kelly shines in an episode that sees them dupe Chuck into being more gullible, but only makes her more paranoid, while Judah Bellamy’s Jake finds himself exploited by Mama P and entering the world of work with a fact checker that sees through the hipster sheen of a new local restaurant. (Warning, kids: Not all employers want the best for you.)

It’s also thanks to the clever echoing of our three central BFFs in the adults around them, as Kelly, Darbie and Hannah repeatedly travel back in time to the 1950s (or, in a Halloween special that tees off the season, to 2016) to learn new facts or nab new ingredients. The fact that Season 2 starts off with a bout of time-travelling is a sign of just how ambitious Amazon’s programme has become – the fact that it pulls it off with an intriguing mystery and without missing a chance for slapstick comedy is a sign of how impressive it really is. Even without all of that, it’s a treat just to see elderly female characters getting a chance to be active drivers of a story – how many TV shows can you say that about?

But the secret ingredient to Just Add Magic remains laughter – and Season 2 doubles down on it, dishing up an extra portion of giggles to go with every additional course of peril. Abby Donnelly’s Darbie remains a stand-out star, cooking up one-liners at rapid speed, even as she reaches the tragic realisation that her parents aren’t getting back together, while Kelly and Hannah enjoy a bigger share of both laughs and serious moments. The jokes are good by anyone’s standards, as likely to make parents chuckle as the children – “You love a piano,” Kelly tells Darbie, as they enter a Halloween party. “Not when it’s being played by a dead mummy with no hands.” – while the season-long, decades-spanning story arc will have audiences of all ages binge-watching. A witty, funny, tense supernatural show with an over-arching plot and realistic relationships? That Buffy meets Bake Off recipe has lost none of its charm: Just Add Magic Season 2 is as moreish as ever.