With characters that are great company and a story that zips along, the strong finish to Sneaky Pete's first season leaves you wanting more.

While the opening episodes of Sneaky Pete were promising but imperfect, the rest of the season happily delivers more of the good and less of the bad. Giovanni Ribisi continues to play a blinder as Marius/Pete (perhaps we’ll even see him acknowledged next awards season), as do Margo Martindale and some guy called Bryan Cranston in support.

Though the plot still depends on the less-than-convincing gangsters in New York, the lion’s share of the story focuses on Marius’ adopted family, as they’re gradually revealed to be as chaotic and criminal as he is. Matriarch Audrey (Martindale) has made, shall we say, a poor financial decision, incurring the wrath of Native American meth dealer Dockery (Chaske Spencer) and his psycho henchman. Thrown into this mix is Marius’ desperate attempt to con his way out of hock with crimelord Vince (Cranston) and save his brother (Michael Drayer), who’s being held hostage.

It’s a tangled plot that the writers only just manage to stay on top of; there are a few strands – such as Marius’ enjoyably bad-ass parole officer (Malcolm-Jamal Warner) – that just get abandoned halfway through the season. But, for the most part, we’re kept on the hook via on-the-money twists, crackling dialogue and some delicious cliffhangers.

Crooked cop Winslow (Michael O’Keefe) develops into a first-class bad guy, at his most menacing when leading six-year-old Ellen (Jeté Laurence) around the house, while plucky teen Carly (the fantastic Libe Barer) ineffectually wields a shotgun. It feels right that he winds up whacked in a car; the fact Margo was the accidental shooter and that the rest of the family is complicit in covering it up makes it just one factor that sees an ordinary (if slightly dodgy) family edge a little closer into Marius’s world – his ability to bring misery to his friends spreads to them.

The con itself, spread over the last couple of episodes, is great fun and the Ocean’s 11 vibe cements Marius’s ragtag gang in the audience’s affections – by the end of Season 1, we find we’re actually hoping this isn’t the end of the story. But it’s all tied up neatly: Winslow dead, Vince in FBI custody, and Eddie and Karolina (Karolina Wydra) heading off for a new life in Vegas. And then – wow – a doozy of a final twist, as Marius is bundled into the back of a car, this time by two crooks (one of whom is the painfully handsome Desmond Harrington, best known as Detective Quinn in Dexter). Thinking he’s Pete, they demand he take them to his mother – so she can hand over the “11 million dollars”.

Smash to black – tune in next season. Praise the TV gods, Amazon have announced Sneaky Pete’s renewal, something that didn’t look overly likely based on the opening episodes. But, fittingly for a show about a conman, the writers get away with it and live to fight another day – but only by the skin of their teeth.

All episodes of Sneaky Pete are available on Amazon Prime Video, as part of a £5.99 monthly subscription. 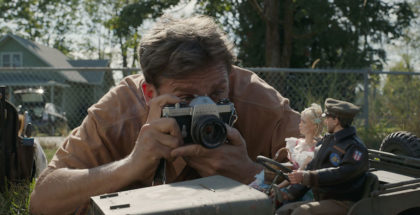