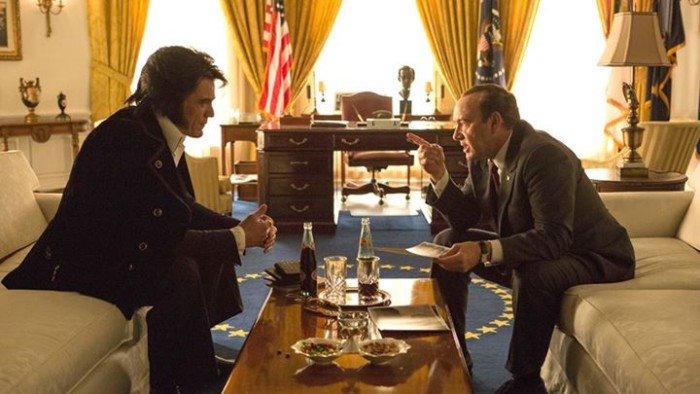 A diverting piece of what-iffery that lives up to the absurdity of its title, if nothing more.

Elvis and Nixon. It sounds bizarre, but these two men actually met in real life, an encounter that took place in the White House behind closed doors at the pop star’s behest. The result was the most requested photograph in the US National Archives – and an irresistible film pitch.

The truth is stranger than any fiction could hope to come up with: Presley, the King himself, rocked up at the White House in 1970 asking to meet with the President. His request? To become an undercover operative for the FBI, a “Federal Agent-at-Large”, a title he may or may not have just invented himself. Nixon, sensing a PR opportunity, agrees to talk.

Sadly, their actual conversation is kept under lock and key, so writers Joey Sagal, Hanala Sagal and Cary Elwes have to invent most of what we see on screen – and that’s where Elvis & Nixon, perhaps inevitably, struggles to deliver on its premise. With two big names in the title, almost anything that happens after the wonderfully dated opening credits is guaranteed to be disappointing. In fact, this is more Elvis with Nixon, as we follow Presley’s journey to the White House, and his efforts to persuade Nixon’s staff to let them meet – and then the President drops in for the odd scene.

But if it’s sheer star wattage you’re after, Elvis & Nixon delivers without fail, thanks to some stellar casting.

Kevin Spacey resists the urge to overplay the Watergate President, doing well to exorcise the ghost of Frank Underwood over the course of the movie’s runtime, courtesy of a pudgy fake nose and vocals that are more convincing than the cliched impersonations we’re used to. This is less of a character study than Frost/Nixon, and Spacey has far less room than Frank Langella to develop his Richard, but he capture’s Dicky’s Tricky side, switching from swearing, rude old man – with an indifference to celebrity – to the fake-smiling politician who pretends to be fine with Presley swanning in, cape and all, and helping himself to the POTUS’s personal supply of M&M’s.

As for The King, the only words more exciting than “Elvis & Nixon” are “Michael Shannon is Elvis Presley”. The Take Shelter star is on towering form here, bringing all the intensity and dedication you’d expect – and letting it hang in the air with the lightest of touches. This is Shannon’s lightest turn to date, and you can almost sense him enjoying the chance to just have fun with it, from his karate moves to his monogrammed shades. But there’s a surprising depth to the actor’s portrayal, which, like Spacey’s Nixon, always skews on the understated side. Shannon specialises in brooding outsiders more than comic relief but while might seem like an odd choice to play Presley, it’s testament to just how smart a fit he is that he portrays Elvis with the awkwardness of a recluse, from his soft, often high-pitched voice to his childish plea for an FBI badge. Any lack of physical resemble is offset but that naive, isolated quality, which is delivered with an A-lister’s magnetism – as much as you giggle at the other characters getting all gooey-eyed around him, you’ll be hard pressed to look anywhere else when he’s on screen.

Seeing the two men interact is as delightful as you’d hope, although it throws into sharp relief how little else there is to the story – it’s telling that the script holds back their tete-a-tete until the final 30 minutes, building up the anticipation just enough without creating an anti-climax. Their attempts to display power over each other is a fascinating piece of personal politics, one with real clout but no people skills, the other with charisma but no real authority. If only the rest of the movie, which involves inconsequential drama surrounding both men’s ensembles, could live up to it. The result is a diverting piece of what-iffery. It just needs a little more conversation and a little less action.

Elvis & Nixon is available to watch online excusively on Amazon Prime Video as part of a Prime membership or a £5.99 monthly subscription.

Where can I buy or rent Elvis & Nixon online in the UK?

Twin Peaks Season 1: Unlike anything else on TV

Why you should be watching Mindhunter on Netflix... October 12, 2017 | Ivan Radford