Louis C.K.'s surprise web series: A refreshingly bold move | Where to watch online in UK | How to stream legally | When it is available on digital | VODzilla.co

With a polite email sent out to his mailing list last night, Louis C.K. announced that he had a new “thing” and that you could purchase the first episode of it through his website for $5. This new thing is called Horace and Pete and arrived with no explanation, no press release and zero fanfare. It’s a bold move and one that is refreshing in a media landscape crowded with marketing and discussions about films and television series that don’t even have scripts yet.

C.K. began his career as a stand up comedian but through his show, Louie, he has changed as an artist, adding new strings to his bow and experimenting with those that he already possessed. His stand-up has perhaps always had a sense of melancholy and freedom with regards to content, but Louie saw C.K. taking this further and into directions that were often thought-provoking and even sometimes flat-out provocative. And, significantly, without regard, it seemed, for whether or not scenes or even whole episodes had to be funny.

Horace and Pete is not a comedy show. There are a few moments of acerbic humour, but they are few and far between. This is a drama. And a damn fine one to boot.

Set in a bar in New York – the episode’s only other location beyond the bar area is the apartment upstairs – named Horace and Pete’s, the first episode introduces us to the family that run the bar and the patrons who prop it up. Horace (C.K.) is nominally in charge, but he’s subservient in many ways to Uncle Pete (Alan Alda), who used to run the bar but continues to take a cut of the profits and throw his weight around. Alda is phenomenal as the acidic patriarch, brimming over with bitterness and seething with resentment at every turn.

Joining these two in the running of the bar is Pete (Steve Buscemi) – the bar name and the continuation of the two names is elaborated on late in the episode – who is perfectly cast as the sort of twitchy and awkward character that Buscemi has pretty much made a career out of. There’s an extra depth to Pete here, though, as there is to most of the characters, that goes beyond a mere ‘type’. Pete is running out of his medication – due to an issue with his health insurance – and there’s the sense that he is really struggling. A moment in which he tries to engage with Horace’s daughter (Aidy Bryant) is genuinely uncomfortable to watch, as he strains to make small talk and attempts to interact like ‘normal people’ do. 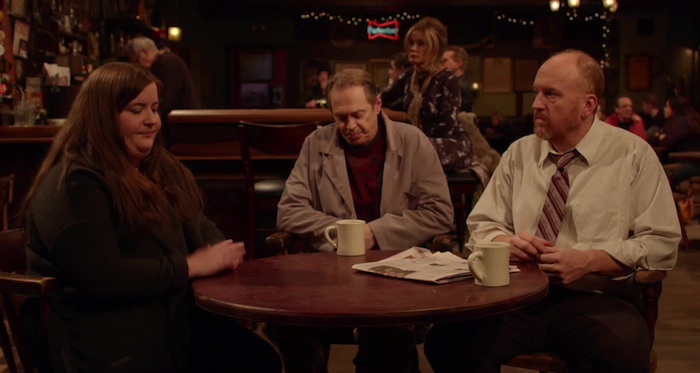 Horace and Pete is, at least judging by its first episode, largely about human connections and more importantly, disconnections. Horace’s attempts to speak to his daughter over the phone but only receiving texts in reply clues us in early on as to how fractured and distant some of these connections truly are. The show even feels, at times, like we’re spectators on a social media platform and witnessing the various fights and dead-end conversations that inevitably occur there. There’s fat shaming, a defence of racism that amounts to ‘I’m not racist, I have a black friend’, unsolicited criticisms from a stranger, arguments about Trump and even a debate about conservatism vs. liberalism. As Horace comments at one point, “This place is toxic”.

That debate surrounding conservatism and liberalism is an interesting skewering of the way in which these two sides of American politics are often presented. There’s the definite sense that C.K. is suggesting that the two groups need not be so antagonistic towards each other, that the shouting on either side is down to misunderstandings and an unwillingness to listen. But as this realisation forms in the minds of those at the bar, a patron named Kurt (Kurt Metzger) points out that neither side wants to get on. As he says, “This is fucking sport” and it really doesn’t matter if you’re a conservatist or a liberal. “You’re both suckers!”

This first episode takes a somewhat dim view of America and its legacy and it seems that this will be a strong theme throughout the series. The episode even builds to a jaw-dropping scene in which Uncle Pete makes a grand and angry speech about the importance of history, family and what is passed down through generations, only to have this all perfectly undercut by one patriarchy-eviscerating line from Horace’s sister Sylvia, played with real firebrand authority by Edie Falco.

C.K.’s script is filled with smart and cutting writing like this, which he will hopefully continue and build upon as the series continues. This is a show that is very dependent on dialogue and performance, often resembling more a filmed play than what we more frequently see on television these days. Horace and Pete’s roots seem more in the work of Arthur Miller and Eugene O’Neil and the BBC’s Play For Today than they do in the modern, glossy, highly-produced TV from the likes of HBO or Netflix. C.K. even thanks Mike Leigh in the credits, something which gives you a clear idea of what he was aiming for.

No doubt shot very quickly – there are very up-to-date references to Trump boycotting the Iowa Republican debate and the Superbowl – Horace and Pete is a little shaky around the edges at times, with a lot of the visuals perfectly functional but hardly ever expressive. The somewhat limited form – an obvious set and a multi-camera set-up – doesn’t really hold C.K. back, though, thanks to the superb script and often stunning acting, and he still finds ways to use the camera and the sound, even if it’s in relatively basic ways. Blocking and focus shifting is meaningfully used, for instance, including a particularly effective sequence in which Horace and his daughter discuss his inability to connect to her; Pete moves in between them and hovering in the background is Marsha (Jessica Lange), perched on a bar stool and adding tension merely by slowly turning round.

The decision to use diegetic sound and simple transitions – an intermission and Paul Simon’s softly sung theme being the only things that ever threaten to detach you from the episode – also adds a real sense of immediacy that pays dividends as the story gets more complex and somewhat emotional. It’s hard not to find yourself leaning forwards in your chair, such is the show’s engaging nature.

The first part of Horace and Pete is a fascinating, melancholic and layered drama and a fantastic new direction for C.K.. With no information about the series forthcoming, we can only hope that we don’t have to wait too long for the next episode.

Horace and Pete available to watch online on Amazon Prime Video as part of a Prime membership or a £5.99 monthly subscription. It is also available to stream and download from Louis CK’s website in up to 1080p in any country. 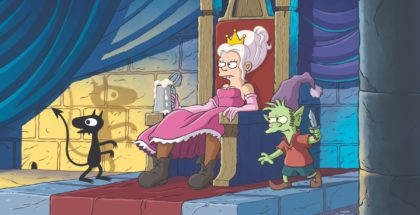