Netflix UK film review: A Bad Moms Christmas | Where to watch online in UK | How to stream legally | VODzilla.co 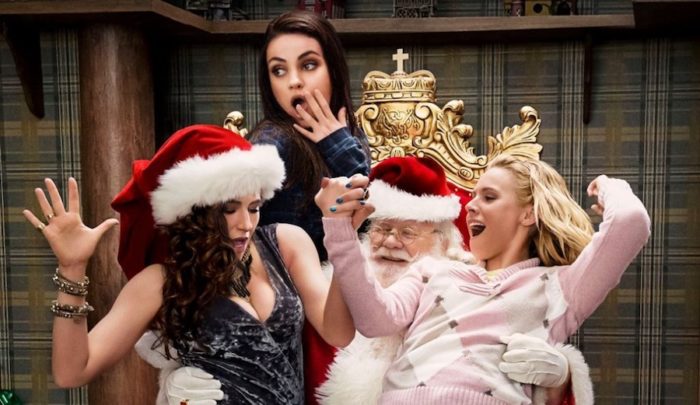 Suitability for a drunk watch once the kids are in bed

There is some fun to be had in this festive sequel, which sacrifices originality for cheap and dirty humour.

Comedy has had a tough go at the box office in the latter half of the 2010s as the stars of Seth Rogen, Steve Carrell and Zach Galifanakis have fallen. True comedy breakout hits have been rather hard to come by. One exception was 2016’s Bad Moms, a film which took the stresses of being a mother in contemporary society and had fun with the steam its central trio of mums (Mila Kunis, Kristen Bell and Kathryn Hahn) needed to blow off. The success of this resulted in a rather quick production and release for A Bad Moms Christmas, a rarity in film – a festive sequel to a non-festive predecessor.

There are tough boots to fill, whether they be Christmas Vacation or A Very Harold & Kumar Christmas and its fair to say that A Bad Moms Christmas isn’t going to be a holiday classic in the coming years, although there is fun to be had.

A real problem here, perhaps a subjective one, is the strain of humour being used. The “surprising use of f-bomb” style is out in full force and, while it has the frank energy of its predecessor, a lot of the laughs do come cheap. Drunk ladies lap-dancing Santa? You got it. A well-hung stripping Santa? Sure, why not. An overly close mum watching her daughter get frisky? Of course. This is a film aimed at a very specific demographic and all of that may well be funny to others but even if it is, much of the comedy feels too much like a repeat of the original film.

All that said, however, this is a Christmas film and ’tis the season for easy watching – this does provide that. The mothers of the first film’s trio, played by Christine Baranski, Cheryl Hines and Susan Sarandon, share a similar dynamic to their on-screen daughters (whom they visit for the holidays) and it would have been nice to see them together more. Their conflicts with their daughters do work, although the Bell/Hines subplot does feel like the runt of the litter, a shame as that narrative is actually the most conceptually interesting of the lot. (It must be said, though, there is constant joy in Kathryn Hahn’s interactions with her love interest.)

Everything wraps up in the ways you expect, but would you really want them to do anything else? No, so grab a drink and let A Bad Moms Christmas enter your eyeballs and exit your brain immediately, with only the image of Peter Gallagher’s smile to leave an imprint.

A Bad Moms Christmas is exactly what it says on the tin. It’s the first film, but set at Christmas, offering barely anything in character growth, no joke that can be called “smart” in the slightest, and production values that scream “this could be a TV show”. But, who cares? It’s Christmas. Have a happy and safe one.

A Bad Moms Christmas is available on Netflix UK, as part of an £9.99 monthly subscription.

Where can I buy or rent A Bad Moms Christmas online in the UK?