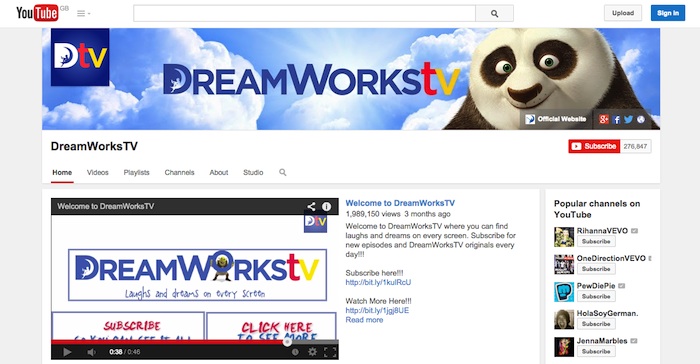 Last month, the online video platform announced that it was planning a new wave of investment in original content from its top creators.

“We feel the time is right to make another important investment in our creators,” said Alex Carloss, Head of YouTube Originals. “That’s why we’ve decided to fund new content from some of our top creators, helping them not only fulfill their creative ambitions but also deliver new material to their millions of fans on YouTube.”

Now, the nature of that investment is becoming clear, as YouTube hunts for a new head to spearhead new kids TV content.

Now, though, YouTube is specifically looking to make kids TV titles: five days ago, it posted an advert for a Head of Family Entertainment and Learning.

“For years we’ve seen a lot of traction across both YouTube EDU and family entertainment. This role will help us further build out these offerings,” a spokesperson told Recode, when asked about the role.

Kids’ TV content has already become a point of competition between Netflix and Amazon, who are frequently snapping up rights to old shows or commissioning new ones. Amazon inked a deal recently with HIT Entertainment to give it licences for Nickelodeon titles and many more. The retailer also has an exclusive deal with Aardman Animations. Netflix, meanwhile, has a DreamWorks contract for classic shows, such as Dora the Explorer, as well as its own HIT agreement and plans for new original DreamWorks content, such as How to Train Your Dragon spin-offs.

Amazon released its first original kids’ series this year – Tumble Leaf and Creative Galaxy – and will shortly release another, Annedroid, followed by others next year. Netflix, in response, has green lit a wave of original family series, from a reboot of The Magic School Bus and a new King Kong show to a series based on Saban’s 1980s toys, Popples.

YouTube joining the race, then, is to be expected. Indeed, in a report from Ofcom last year, YouTube was the second most-visited website for children between the ages of 6 and 14, with 2.16 million unique visitors watching an average of 4 hours and 3 minutes each.

Online viewing starts young: 11 per cent of 3 to 4 year olds and 9 per cent of 5 to 7 year-olds were also found to be watching videos online (on YouTube and other sites) at least once per week. Those numbers unsurprisingly get bigger as ages rise.

DreamWorks launched its new YouTube channel DreamWorksTV earlier this year, building upon the company’s recent purchase of another successful channel, AwesomenessTV, which they snapped up for $33 million. The channel contains a range of new and old content, with its launch trailer receiving 1.98 million views in the last three months.

It is not just animation or entertainment series, though: YouTube is popular with children alone for its deluge of Minecraft content, mostly consisting of walk-throughs of various levels while they’re being created. (An in-depth rundown from The Guardian includes a host of more survey results highlighting how big YouTube’s child audience is.)

YouTube is “the most powerful kids property in the world right now”, Dylan Collins, chief executive of children’s marketing network SuperAwesome told the Children’s Media Conference in July. In August, meanwhile, reports arose that Google was looking at offering accounts to children under the age of 13 – a move that would integrate them officially into YouTube, presumably for a child-friendly version. Indeed, Netflix already offers a kids-only version of its interface across all apps and its website.

The question, therefore, isn’t why YouTube is moving officially into original kids’ content, but why they didn’t do it sooner.