Woody Allen brands Amazon TV series as "catastrophic mistake" | Where to watch online in UK | How to stream legally | When it is available on digital | VODzilla.co

Woody Allen has branded his upcoming Amazon TV series a “catastrophic mistake” before production has even started.

The director, who was at the Cannes Film Festival with his new film, Irrational Man, which stars Joaquin Phoenix and Emma Stone, told a press conference that he was already “floundering” with the project.

“I’m struggling with it at home. I never should have gotten into it,” he added.

How much of this, though, is just the usual Allen neurosis?

The show, which will be exclusive to Amazon Prime in 2016, was announced at the start of the year.

“I don’t know how I got into this,” he said at the time. “I have no ideas and I’m not sure where to begin. My guess is that Roy Price [the Vice President of Amazon Studios] will regret this.”

It came across as a typically self-deprecating joke, but Allen’s insecurity over his work has been a constant throughout his career. The director famously never watches his movies once they’re finished and dislikes most of them.

In an excellent interview with Deadline, he was more candid over his struggle in the editing room over the years – not in terms of what to cut out, but what to keep in.

“I think probably over the years I’ve been too ruthless, mainly because I’m anxiety-ridden. I’ve cut jokes and bits out of movies that would have played just great, if only I had had the nerve to leave them in,” he admitted.

“I remember walking out of my house in Love And Death in the cold of winter, and the snow is covering the front door, and my having to dig a tunnel straight through. It looked very funny at the time,” he added. “I cut it.”

He said he finds it harder when he’s starring in the films: “It’s like if you’ve ever heard your own voice on a tape recorder? It’s worse when you see and hear yourself.”

But even when he’s not on screen, he still gets an attack of the nerves once it’s all done and dusted: “I have to let go because I get that feeling. Oh, God, I had such great people here and I let them down, whether it’s Dianne Wiest, Naomi Watts… They trusted me completely and they do my films for very little money and I always feel, ‘Oh, God, I let them down.’”

When it comes to Amazon, then, that anxiety has been multiplied countless times.

“I don’t own a computer,” he confirmed. “I’ve never seen anything online at all — nothing. I don’t own a word processor. I have none of that stuff. It’s not an act of rebellion. I’m just not a gadget person.”

So why did he agree? Well, money certainly seems to have played a part: “Amazon kept coming to me and saying, please do this, whatever you want,” he explained.

That courting process continued for a year and a half, as Amazon offered better deals: “They offered a lot of money and everybody around me was pressuring me, go ahead and do it, what do you have to lose?”

Amazon evidently feel they have little on the table to gamble away: the site has increasingly stepped up the scale and quality of its original content in recent years, from the Golden Globe-winning Transparent (by Six Feet Under’s Jill Soloway) to, most recently, the Ridley Scott-produced adaptation of Philip K Dick’s The Man in the High Castle. For Price and his team, an exclusive Woody series is a feather in their streaming cap, perhaps not unlike the stars who continue to line up to collaborate with the director, even if the work is not his best.

But what exactly can we expect from his first foray into television? As the title of his 2009 film goes, whatever works is the philosophy adopted by all parties involved. All we know is that it will last six 30-minute episodes.

Allen, tellingly, is still in the same mindset, regardless of how the project turns out.

“I only hope that when I finally do it — I have until the end of 2016 — they’re not crushed with disappointment because they’re nice people and I don’t want to disappoint them,” he said.

Will Allen’s Amazon series really be a catastrophic mistake? Who knows? His output has been mixed in recent years, from the brilliant Blue Jasmine and Midnight in Paris to Magic in the Moonlight and – judging by the Cannes buzz – Irrational Man.

But one thing is certain: you can bet he’ll be feeling anxious about it for a long time to come. 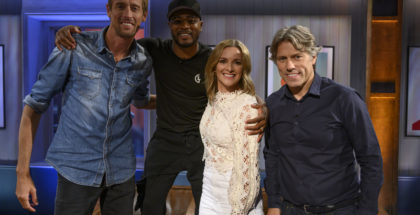