Small Axe to premiere on BBC One this November | Where to watch online in UK | How to stream legally | When it is available on digital | VODzilla.co

Small Axe to premiere on BBC One this November

Steve McQueen’s anthology series Small Axe will premiere on BBC One this November.

Set from the late 1960s to the mid-1980s, the collection of five films each tell a story involving London’s West Indian community, whose lives have been shaped by their own force of will, despite rampant racism and discrimination. Even though this collection of films is set some decades ago, the stories are as vital and timely today as they were for the West Indian community in London at the time. Small Axe is a celebration of Black joy, beauty, love, friendship, family, music and even food; each one, in its own unique way, conveys hard-won successes, bringing hope and optimism for 2020.

McQueen explains: “The seed of Small Axe was sown 11 years ago. Initially, I had conceived of it as a TV series, but I realised these stories had to stand alone as original films, yet at the same time be part of a collective. The anthology, anchored in the West Indian experience in London, is a celebration of all that that community has succeeded in achieving against the odds.

It begins with Mangrove, starring Letitia Wright, which will premiere on BBC One and BBC iPlayer on Sunday 15th November. The film was the opening title of this year’s London Film Festival.

“Steve McQueen’s retelling of the Mangrove 9 case is vital, urgent and passionate cinema,” we wrote in our review.

The series will air weekly from then, with Lovers Rock airing on 22nd November, Education on 29th November, Alex Wheatle on 6th December and Red, White and Blue on 13th December.

Here’s the rundown of each film:

The film centres on Frank Crichlow (Shaun Parkes), the owner of Notting Hill’s Caribbean restaurant Mangrove, a lively community base for locals, intellectuals and activists.

In a reign of racist terror, the local police raid Mangrove time after time, making Frank and the local community take to the streets in peaceful protest in 1970. When nine men and women, including Frank and leader of the British Black Panther Movement Altheia Jones-LeCointe (Letitia Wright) and activist Darcus Howe (Malachi Kirby) are wrongly arrested and charged with incitement to riot, a highly publicised trial ensues, leading to hard-fought win for those fighting against discrimination.

Mangrove was co-written by Alastair Siddons and Steve McQueen.

Lovers Rock tells a fictional story of young love at a Blues party in 1980. The film is an ode to the romantic reggae genre, Lovers Rock, and to the Black youth who found freedom and love in its sound in London house parties when they were unwelcome in white nightclubs.

Lovers Rock was co-written by Courttia Newland and Steve McQueen.

Education the coming of age story of 12 year-old Kingsley (Kenyah Sandy) with a fascination for astronauts and rockets. When Kingsley is pulled to the Headmaster’s office for being disruptive in class, he discovers he’s being sent to school for those with ‘special needs’.

Distracted by working two jobs, his parents (Sharlene Whyte, Daniel Francis) are unaware of what was the unofficial segregation policy at play that is preventing many Black children from having the education they deserve – until a group of West Indian women take matters into their own hands.

Having spent his childhood in a mostly white institutional care home with no love or family, he finally finds not only a sense of community for the first time in Brixton, but his identity and opportunity to grow his passion for music and DJing. When he is thrown in prison during the Brixton Uprising of 1981, he confronts his past and sees a path to healing.

Alex Wheatle was co-written by Alastair Siddons and Steve McQueen.

Red, White and Blue tells the true story of Leroy Logan, a young forensic scientist with a yearning to do more than his solitary laboratory work. When he sees his father assaulted by two policemen, he finds himself driven to revisiting a childhood ambition to become a police officer – an ambition borne from the naïve hope of wanting to change racist attitudes from within.

First, Leroy has to face the consequences of his father’s disapproval, never mind the blatant racism he finds in his new role as a despised – yet exemplary – Constable in the Metropolitan Police Force.

Red, White and Blue was co-written by Courttia Newland and Steve McQueen.

Marking 50 years since the events depicted in the film, Mangrove tells the true story of the Mangrove 9, the group of Black activists who clashed with London police during a protest march in 1970 and their highly publicised trial that followed. The trial was the first judicial acknowledgment of behaviour motivated by racial hatred within the Metropolitan Police. Co-written by Steve McQueen and Alastair Siddons, the film is one of five from Small Axe, a drama anthology which comprises five original films created by Steve McQueen for BBC One, staring Letitia Wright, Shaun Parkes and Malachi Kirby.

McQueen says: “I couldn’t be happier that Mangrove will open this year’s BFI London Film Festival. Although the themes are universal, Mangrove is a London story. It may have happened fifty years ago, but it’s as relevant today as it was then.”

The move sets the tone for the festival’s innovative 12-day event, which takes the LFF out to cities around the UK, and with many films across the programme also available for virtual premieres at home. The full programme and how it will all work will be announced on 8th September.

Sunday 9th August marks the 50th anniversary of the march of 150 protesters of West Indian, African and South Asian heritage in Notting Hill, West London. They marched to local police stations in protest of police harassment in their communities including the Mangrove restaurant. Nine protest leaders were arrested and charged with incitement to riot: Frank Crichlow, Darcus Howe, Altheia Jones-LeCointe, Barbara Beese, Rupert Boyce, Rhodan Gordon, Anthony Innis, Rothwell Kentish and Godfrey Millett. The group later became known as the Mangrove 9. The trial was the first judicial acknowledgment of behaviour motivated by racial hatred within the Metropolitan Police.

Their story will be told in BBC One’s new drama Mangrove 9, part of Steve McQueen’s anthology Small Axe. Set from the late 1960s to the mid-1980s, the films each tell a different story involving London’s West Indian community, whose lives have been shaped by their own force of will despite rampant racism and discrimination. The title is derived from an African proverb, which has resonance throughout the Caribbean, “if you are the big tree, we are the small axe”. This was made popular by Bob Marley in The Wailers song Small Axe from the album Burnin’ (1973).

McQueen says: “Sunday, August 9th, is 50 years since the Mangrove March, which led to nine innocent Black women and men being arrested. It was a march necessitated by relentless police brutality in Notting Hill. To commemorate the bravery of these community activists and the nine who went on to be acquitted of incitement to riot with the judge citing ‘evidence of racial hatred’, I am sharing the trailer of Mangrove, one of five films to be released under the banner Small Axe.”

Small Axe will premiere on BBC One and iPlayer this autumn and air on Amazon Prime Video in the US. Read on below for the first image of John Boyega in Red, White and Blue, another of the Small Axe films. 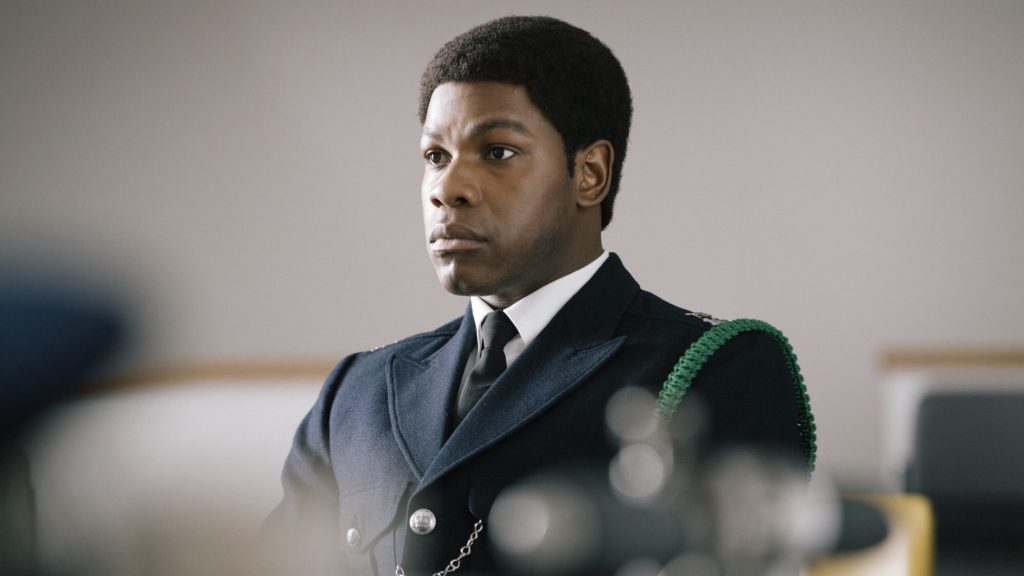 John Boyega is heading to BBC One in Steve McQueen’s Small Axe, and a new image gives us our first look at the Star Wars actor in the series.

Small Axe is anthology of hour-long stories conceived and written by McQueen with Alastair Siddons and Courttia Newland (Alex Wheatle is a writing consultant). The six films tell five stories, with the first told across two episodes, and are set within London’s West Indian community from the late 1960s to the early 80s.

The title Small Axe is derived from a Jamaican proverb that has resonance throughout the Caribbean, “if you are the big tree, we are the small axe”. Small Axe is also the title of a Bob Marley song from 1973 album Catch A Fire. It means that relatively marginal or small voices of dissent can successfully challenge more powerful voices.

Boyega will star in Red, White and Blue, an episode that follows Leroy Logan, a real-life police officer who wanted to change the force after his father was killed by two police officers. Logan was appointed MBE in 2001 for his role in developing anti-racist policies. for the police, later retiring in 2013.

Boyega is joined in the drama by Steve Toussaint (Prince of Persia) and newcomers Tyrone Huntley, Nathan Vidal and Jaden Oshenye.

Other episodes in the anthology include Alex Wheatle, Education, Mangrove and Lovers. The latter two were selected as part of the Cannes Film Festival line-up in June, although the festival was later cancelled. Cast members for the other episodes include Letitia Wright (Black Panther), Malachi Kirby (Curfew, Black Mirror, Roots), Shaun Parkes (Lost In Space, Hooten & The Lady), Rochenda Sandall (Line Of Duty, Black Mirror: Bandersnatch), Alex Jennings (A Very English Scandal, Victoria) and Jack Lowden (The Long Song, Mary Queen of Scots).

The series is a co-production between BBC One and Amazon Studios and is expected to air later this year.

The Oscar and Bafta-winning filmmaker’s new project is an an anthology of hour-long stories conceived and written by him with Alastair Siddons and Courttia Newland (Alex Wheatle is a writing consultant to the series). The six films tell five stories, with the first told across two episodes, and are set within London’s West Indian community from the late 1960s to the early 80s.

The title Small Axe is derived from a Jamaican proverb that has resonance throughout the Caribbean, “if you are the big tree, we are the small axe”. Small Axe is also the title of a Bob Marley song from 1973 album Catch A Fire. It means that relatively marginal or small voices of dissent can successfully challenge more powerful voices.

Mike Elliot is producing for EMU Films with Turbine Studios and Anita Overland. Associate producers are Charlotte Andrews for Turbine Studios, Susan Dolan for Lammas Park and Helen Bart. The drama was commissioned by Charlotte Moore, Director of BBC Content, and the executive producer for the BBC is Lucy Richer, Senior Commissioning Editor for Drama.

McQueen says: “I felt these stories needed to be shared. I wanted to re-live, re-evaluate and investigate the journeys that my parents and the first generation of West Indians went on to deliver me here today calling myself a Black British person. What’s important about our stories is that they are local but at the same time global. I think audiences will identify with the trials, tribulations and joy of our characters as well as reflecting on the present environment in which we find ourselves. The dynamic nature of the series allows us to confront injustice in the face of adversity hence the proverb Small Axe.”

Piers Wenger, Controller of BBC Drama, says: “It is an honour to have Steve McQueen, along with this stellar cast, tell these important and inspiring stories on BBC One. Small Axe will air on BBC One next year, and this powerful drama is not to be missed.”

Tracey Scoffield, Turbine Studios Executive Producer, says: “We’ve been working with Steve McQueen and the BBC for over five years developing this project and the privilege continues now we are in production, putting together the best cast and crew to do justice to these incredible stories and the real people behind them.”

Lenny Henry, Hugh Skinner and Rob Brydon to star in Zog and the Flying Doctors 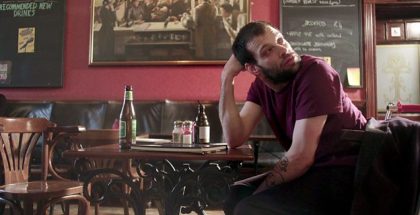