ESPN videos removed from YouTube after launch of subscription service | Where to watch online in UK | How to stream legally | When it is available on digital | VODzilla.co

ESPN videos removed from YouTube after launch of subscription service 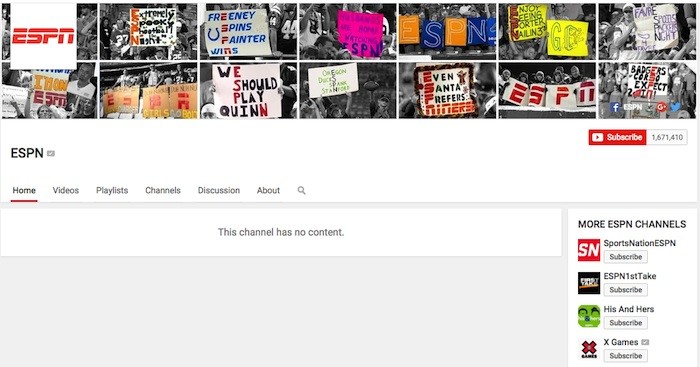 ESPN videos have been removed from YouTube following the launch of the site’s subscription service.

YouTube Red, which was unveiled last week, has been the subject of much debate, both within the online video industry and the creators publishing on the site. For $9.99 a month, Red lets users watch YouTube videos without any adverts, as well as download videos to watch offline.

All content is automatically included in YouTube Red, which has caused some controversy among vloggers – although their videos will still be available to view for free with adverts to the general public. Publishers will then be paid a share of the subscription revenue depending on the amount of time spent watching their videos by subscribers. (YouTube will begin launching exclusive subscriber content next year.)

The controversy has arisen over the fact that if YouTubers refuse to take part in YouTube Red, all of their videos will be made unavailable. While only a very small minority of vloggers are thought not to be on board with the scheme – which YouTube insists is a way to provide extra income for its creators – the service’s launch also appears to be causing ripples among YouTube’s commercial partners. Indeed, companies who base their video publishing strategy upon ad revenue may have been caught by surprise by the new scheme.

The first partner to flinch is ESPN, whose videos have mostly been set to private on the site and are therefore unavailable to everyone. It is not clear whether this action was taken by YouTube ESPN, and it does not apply every single ESPN sub-channel, although Disney, which owns ESPN, has said it is supportive of YouTube Red. Indeed, the official Disney YouTube channel remains up and running.

“Disney has signed the agreement for YouTube Red,” YouTube told The Verge, “but ESPN is not part of the subscription service at launch due to rights and legal issues.”

Catch up TV reviews: Homeland, My Son The Jihadi, Land of the Midnight Sun, Killing Kennedy

Vloggers told to be open about advertising products on YouTube... November 26, 2014 | James R