Bodyguard: The kind of anti-binge-watching boost BBC One needs | Where to watch online in UK | How to stream legally | When it is available on digital | VODzilla.co

Bodyguard: The kind of anti-binge-watching boost BBC One needs

Is she? Isn’t she? Did he? Didn’t he? Most of the UK will be tuning in their TV sets tonight to find out the answers, as BBC One’s Bodyguard draws to what promises to be an explosive finale. It’s the kind of show that has drawn a nation together at a time when it’s divided in so many other ways. Because no matter what your politics or social background, everyone is turned into an identical nervous wreck when Jed Mercurio writes a TV series. The result has been the biggest new drama on British TV in a decade – the kind of major national event that’s reserved solely for the World Cup final and The Great British Bake Off. In an age of binge-watching, it’s exactly the kind of booming hit BBC One needs.

And yet the show, created by the Line of Duty writer, doesn’t entirely hail from the BBC at all: it’s a World Productions programme, an outfit that’s now owned by ITV Studios. A commercial arm for ITV, which makes money by selling off productions to other broadcasters, it’s also made Save Me for Sky Atlantic and even Line of Duty for BBC One. But that’s the game in which the BBC now has to operate: one of acquisitions and branding. It’s a dog-eat-dog contest, one that the BBC is struggling to continue winning.

That’s because the landscape of TV has changed dramatically in recent years, and the rise of international giants such as Netflix and Amazon Prime Video (not to mention Facebook, YouTube and the soon-to-launch Apple TV service) has stepped up the profile, scale and cost of TV. It’s a golden age for the small screen – and an expensive one.

Netflix and Amazon are spending $8 billion and $5 billion a year respectively on content. Even Apple’s fledgling platform is investing $1 billion in its initial slate of launch content. Britain’s public service broadcasters, meanwhile, are spending £2.5 billion on new programmes – not the BBC alone, but all of them together. With the government having frozen the licence fee and cut budgets at the Beeb, not to mention lumbered it with the cost of free TV Licences for over-75s, the corporation is facing tough times, and needs more money from somewhere to sustain its performance.

“A decade ago, premium high-end drama might have cost £1 million an hour in today’s money. Premium drama today costs many times that figure routinely,” said BBC Director-General Tony Hall in a recent speech to the Royal Television Society. “That has resulted in the BBC needing to spend significantly more just to stand still.”

Indeed, Netflix boarded Bodyguard way back at the script stage, with its involvement being announced this week – it will release the show in October in the USA and elsewhere, while it will remain on BBC iPlayer in the UK (it’s currently set to expire in six months on the Beeb’s VOD platform). The news that Bodyguard would be branded a Netflix Original in the States arrived just as Tony Hall delivered his speech, sparking fear from some corners that a potential second season might depart the Beeb altogether for Netflix waters.

Mercurio, though, is a man who has consistently praised the BBC and thanked it for its help, from its broadcasting of Line of Duty to its support of Bodyguard “throughout production”. And the BBC would be highly unlikely to let Bodyguard go. Its success has stemmed partly from its anti-binge mentality: airing weekly on Sunday nights has seen the programme build up a head of steam, turning into appointment viewing. (One publication, which specialises in linear TV listings, even published a spoiler on its front cover the week after one dramatic episode partway through.)

It’s precisely that kind of canny scheduling (the BBC released Killing Eve, on the other hand, all-at-once on BBC iPlayer, along with Danny Boyle’s US series, Trust) that has turned Bodyguard into a success: Episode 1 won 2.2 million requests on BBC iPlayer in its first week, taking its consolidated seven-day figure to 10.4 million, the highest figure for a new drama since records began in 2002. And with ITV Studios enjoying a rise in revenues by 13 per cent in 2017, it’s the kind of project that can earn British talent and productions a profit, as well as benefit its UK broadcaster. Indeed, the BBC has boosted its profile and brand with the show, as well as its traffic on BBC iPlayer – when the Counter Terrorism Police are using your show to drive recruitment, you know people are talking about you.

Hall warned this week that co-productions such as Bodyguard are fading.

“Co-production helped make up the difference for a while, but those deals are becoming more rare,” he said. “You can argue about the size of the future gap, but there’s no doubt there is a gap today in funding public service broadcasting, and there’s going to be one in the future.”

But Amazon Studios has since reiterated its commitment to continuing such investment in content. Amazon Europe boss Georgia Brown told the Royal Television Society’s London conference that the company “desperately” cares about domestic broadcasters. (Amazon, for its part, is teaming up with BBC Two for an upcoming adaptation of Good Omens.)

“We are not here to compete, we are looking to offer [audiences] something they are not getting elsewhere, and looking at the white spaces. We aren’t here to tread on toes. We are not here to take over,” Brown noted. “Fleabag is a great example of where we worked with the BBC and Phoebe Waller-Bridge.”

With Netflix outbidding broadcasters for The Crown (produced by British company Left Bank Pictures), these remain anxious times for UK broadcasters hoping to compete on an online stage. Nonetheless, the BBC’s achievement can be seen in its sheer value for viewers: each hour of BBC TV watched by a household costs it 8p. For an equivalent SVOD service, that number’s more like 17p. And for an equivalent pay TV service, it’s as high 35p per hour.

Hall, meanwhile, is optimistic about the BBC’s ability to challenge, fuelled by some creative restructuring to focus on its content output.

“I am not among the doubters who say you can’t compete against the might of the global giants. I believe the opposite,” he said. “They have their job to do, their services to provide. We have ours. Scale is not everything. Smaller can be beautiful.”

Bodyguard’s booming success is precisely the kind of show that demonstrates it – after all, Richard Madden’s paranoid security specialist David Budd has got the potential to become BBC One’s answer to Jack Bauer and, not unlike Sky One’s Lucky Man, spawn a 24-esque franchise of high-octane sequels with international appeal. Presuming he makes it out of Season 1 alive, that is. And there’s only One place to find that answer out.

Bodyguard is available on BBC iPlayer until 23rd March 2019.

VOD film review: He’s Out There 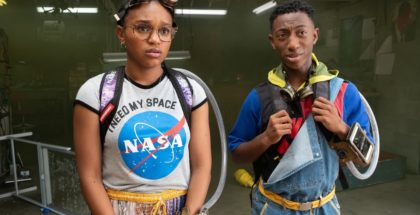