Ambition, anger, and the complexity of female power in Jessica Jones | Where to watch online in UK | How to stream legally | When it is available on digital | VODzilla.co

Ambition, anger, and the complexity of female power in Jessica Jones

Warning: This contains spoilers for Jessica Jones Season 2. Not caught up? Read our spoiler-free review of the opening episodes here.

Season 2 of Jessica Jones dropping on International Women’s Day was a nice slice of PR/scheduling zing, but it’s also a particularly interesting lens to look at the show through. While the first season was driven largely by David Tennant as the proverbial crazy ex, this season has no such obvious villain set up from the off. Trailers pointed to Jessica delving deeper into her past, and more of a prominent role for Trish and (thankfully) Malcolm. Malcolm won’t get a huge look-in in this piece but he will and should in others – read our binge-reviews here – elevated from a bit player in Jessica’s periphery to a fully-formed character with purpose, contribution and, finally, his own backstory.

But then that’s the power of Marvel TV shows. Often the most interesting dramas come from the people who aren’t superheroes (for example, the true hero of Daredevil is Foggy Nelson, using his regular superpower of being a damn good lawyer as well as – as this series points out – just a decent human being) and Jessica Jones’ second season gives an opportunity for those in Jessica’s periphery to come to the fore, each in turn revealing something about the show’s mission and message, and about Jessica herself. But how does being that close to a real-life superhero – albeit a tortured one – impact one’s self-esteem and sense of perspective and purpose? Well, in the case of Trish Walker, honestly not well. The development of Trish’s story is one of the reasons that this season is so much more compelling than the first – like Malcolm, relegated to more of a bit player in the first season, she has graduated from the motivator/hero’s journey mobiliser (albeit with the show’s best zingers to boot) that she was in Season 1. 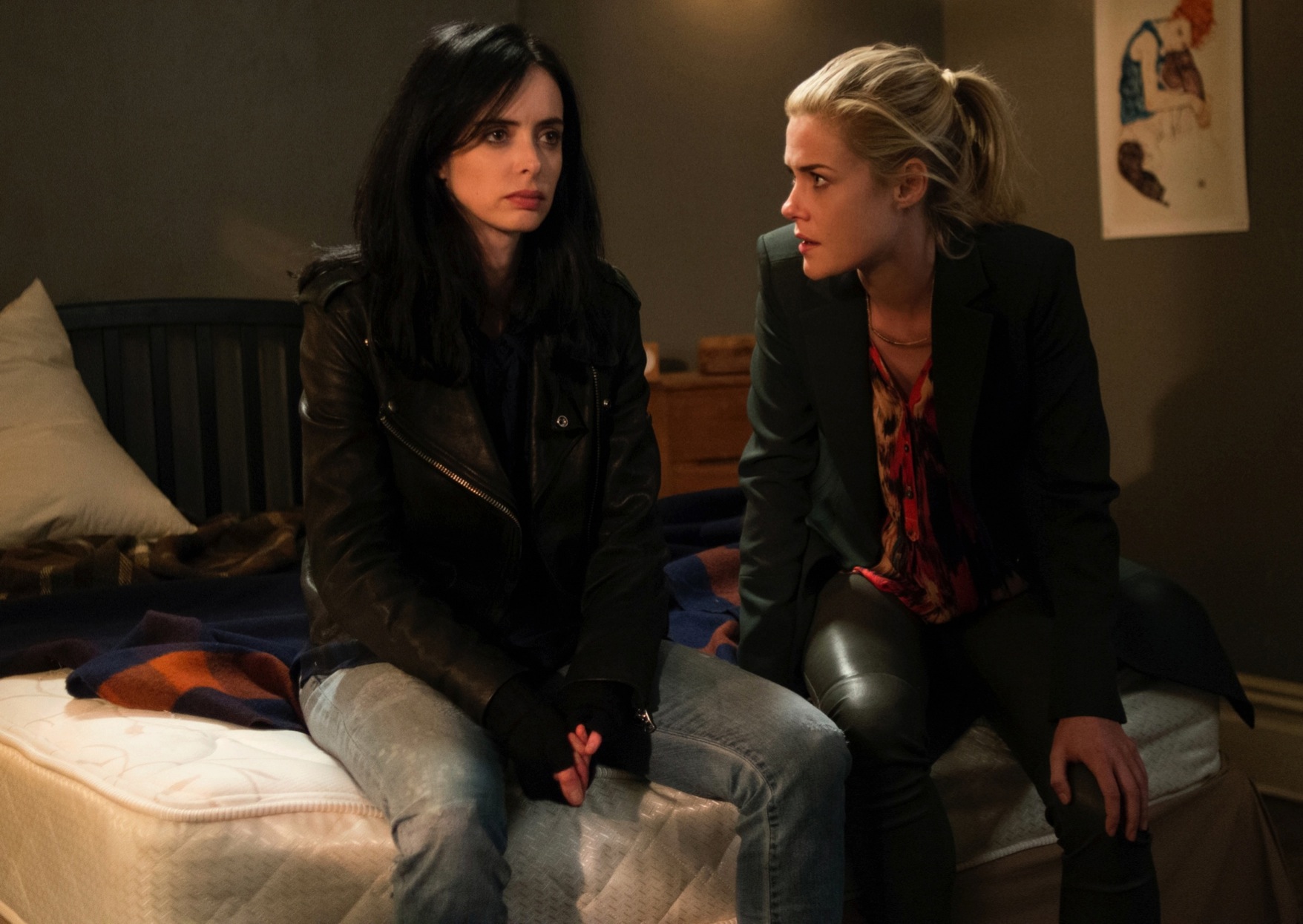 For, as you might expect, the impact of being both a former child star, a sidelined celebrity with aspirations of more, and the best friend of one of New York’s most physically intimidating women weighs heavy on Trish. Her revelation that she doesn’t want to marry her famous journalist boyfriend – she wants to be him – speaks so much truth to women tired of being behind powerful men, as much as it does of a woman, like Jessica, desperately trying to break free of her past. The fact the season begins with her in her Patsy costume performing as a favour to gather information is as much of a deliberate set-up as the way we first revisit Jessica back in her guise as a PI – both women haunted by their pasts, unable to escape them, but ultimately trying to use them to do good.

The Trish plotline is also giving us a more familiar yet more timely look at the story of a survivor – as she reveals early on in the season, she is a victim like Jessica is, although where Jessica’s victimhood stems from Kilgrave’s mind control, Trish is a victim in a more traditional sense in the post-Weinstein light of day: a child star taken advantage of by a director. As many have done in recent months, she forges something powerful out of her pain, but as well as the mental fightback, she finds a physical way to dole out revenge of some kind by dosing herself up on Simpson’s performance enhancer and roaming the streets of Hell’s Kitchen as her own version of a vengeful angel. It’s a deeply familiar sight – looking for scenarios in which she can feel physically powerful but also morally superior. It’s also a deeply heartbreaking one – mimicking the simpler side of her superhero sister’s strengths to make herself seem physically powerful in a world where she feels emotionally lost, without any of the turmoil or larger-than-life impact – and adds another level to their complicated sister relationship. 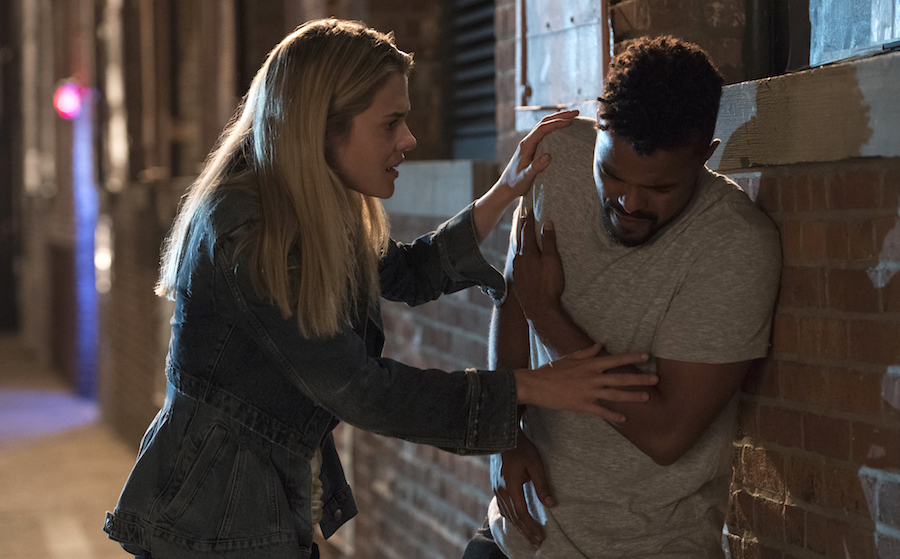 While Trish is clearly a twisted kind of jealous over Jessica’s power (and Griffin’s talent/position), Jessica is likely jealous of the simplicity of Trish’s influence (a power in its own right), but also the seeming simplicity of her life, as we sense from her lingering on Trish’s periphery in party scenes throughout the show and in the flashbacks to their younger days. While last season dealt with her as a survivor and the fallout of her relationship with Kilgrave specifically, this season sees her battle her demons as a reluctant superhero. Psychologically, it adds a rich and complex new layer to Jessica’s turmoil – on the trail of the people who damaged her/made her super in a quest for closure, she will also inevitably be met with their rationale for why they did what they did to her.

That will likely give her the answer she craves, but the fact that she and the rest of the world all have their own feelings on what her power is for and what it should be for colours this season more richly than the purple hues that drench each scene, reminding us what still haunts and perplexes her. A woman calls on Jessica’s PI skills to catch a cheating boyfriend, but expects Jessica to use her physical skills to deal a more finite type of justice. A crime scene points the finger straight at our deadpan detective, and the convenience of her anger and strength land her in a cell. Tempering her in her daily work life with the more rational, passive Malcolm is no accident, adding to the subtly gaslighting element of Jessica’s surroundings, all of which are telling her (as many women will have heard in recent months and years before) that she is irrational, emotional, not normal, the one with problems.

An angry woman is difficult enough for the world to handle. An angry woman who could physically overpower an angrier man, as presented in our crime scene? Now that’s a dangerous concept. It’s no coincidence that of our Defenders, it’s the two white men who have learned and honed skills that require discipline – and subsequently command respect – from the off, and the woman and the Black man who both have physical powers given to them that mirror their own specific strifes; as various commentators on Luke Cage noted, a bullet-proof black superhero is as potent a societal signal as a physically unbeatable woman who is still a victim, and yet because these are something that they must learn to control, rather than learn how to deploy, the fear naturally resides with them.

Female anger – and society’s inability to deal with it – has always been a prominent undercurrent of Jessica Jones. The addition of an antagonist with a physical strength greater than even Jessica’s (a subtle allegory of how women become more resilient to societal BS as they age?) adds an interesting complexity to what would otherwise be an open-and-shut story of a world underestimating the righteous fury of a survivor as something to easily be disregarded as just ‘emotions’ or, worse, her own fault.

Gaslighting dominated much of Jessica’s earlier interactions with Kilgrave in the first season – smarter people than me have shone a new light on his justifications, given they’re now in the mouths of so many more people toeing the uncomfortable grey area between Ansari and Weinstein – and it continues to dominate this season, as Jessica’s foes weaponise her own deep insecurity and unhappiness against her. She, too, constantly turns the lens on herself to scrutinise her own behaviour with increased vigour, as more details about her new foe are revealed. 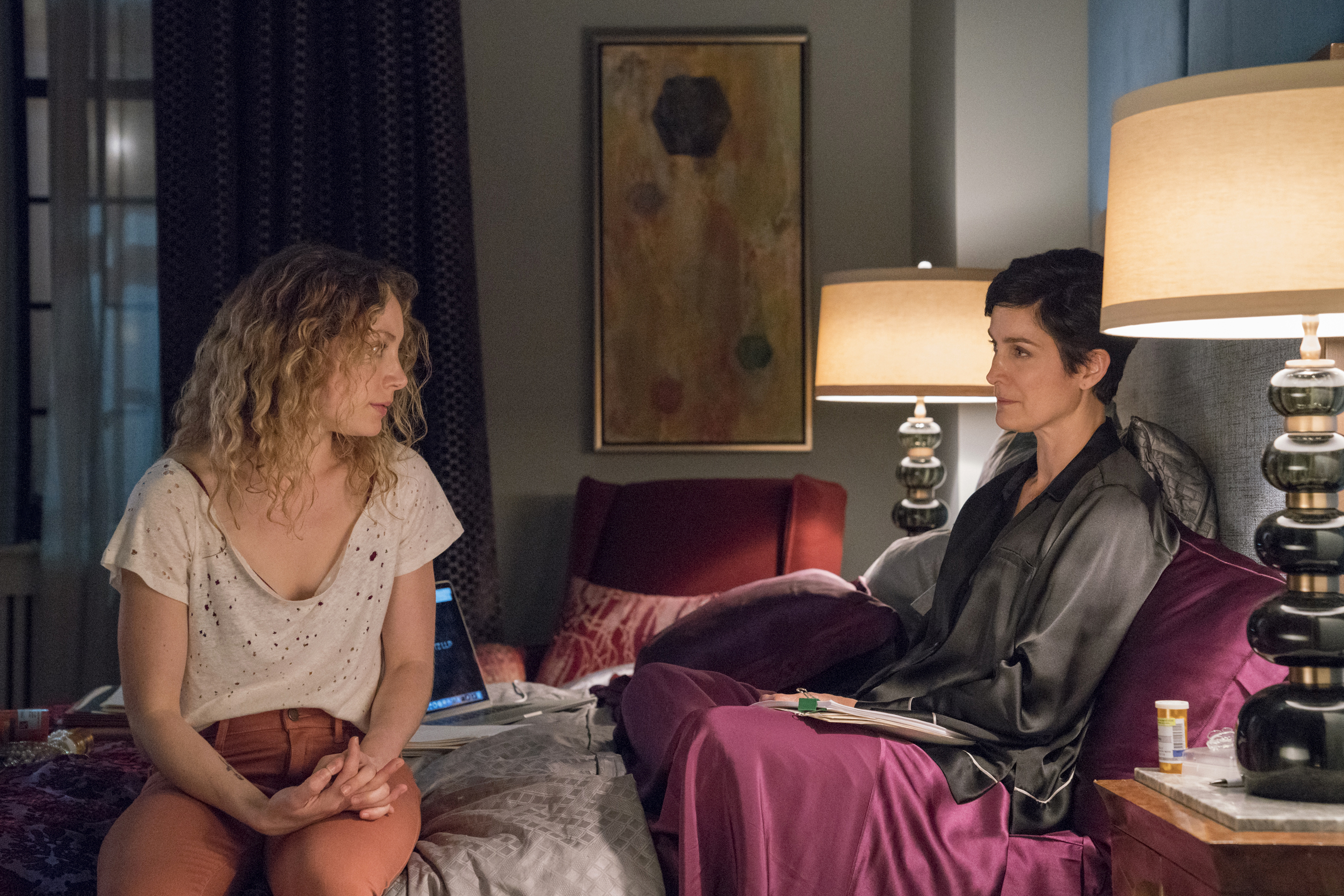 I don’t feel you can write a piece about ambitious women in this show without at least nodding to one in particular – Jerry Hogarth, the black queen to Claire Underwood’s white. Comparing her to a certain other older woman in this season who has to confront the morality of how she exerts her power, as time and circumstance force her to turn introspective, is somewhat inevitable. It’s also interesting to compare her – poised, together, yet with her perfect empire shattered – to the two younger women trying to build or rebuild theirs. Is she a cautionary tale about the danger of ambition? The fallout of the myth of ‘having it all’? Or simply another character, who, like Trish and Jessica, is spending much of this season figuring out what really matters?

To work that out, everyone has their methods. Jessica and Trish both struggle with the challenges of using their own particular gifts (or curses) – Trish, her stardom as a result of an overbearing, abusive parent, and Jessica, her powers by way of a tragic accident. But to consider those gifts, it’s worth noting the total lack of autonomy both are really able to exercise over their situations, which is writ large across their struggles in Season 2. Despite no longer being Kilgrave’s pawns, they remain devoid of the luxury of choice, both in their historic situations and – with paparazzi and police at every turn – their current ones. For a superhero show that fuses horror, thriller and noir, Jessica Jones remains an extremely grounded exploration of two women working out where they came from, and where they go next, and how hard, even in their positions of privilege, that can be.

Jessica Jones: Season 1 and 2 is available on Netflix UK, as part of an £9.99 monthly subscription.

Why you should be watching Billions

The Defiant Ones: An inspiring portrait of two music titans