This week, MUBI continues its trip overseas to South America, as it dives into the vibrant, surprising and unique cinema of Argentina. A new wave of Argentine film has brought a number of impressive independent filmmakers to our screens, while production company El Pampero Cine has rebelliously pushed boundaries in production, exhibition and more. Over the next month, MUBI will revisit Argentine cinema to showcase films that redefine low-budget filmmaking and couldn’t come from anywhere else.

With Ismael’s Ghosts opening Cannes and My Golden Days on the way to UK cinemas, MUBI celebrates Arnaud Desplechin with a double-bill, beginning with 1992’s La Sentinelle. The mystery thriller follows a medical intern, who finds himself drawn into a world of international intrigue after discovering a shrunken human head in his luggage.

Praised as “sublimely wayward” by the New York Times and dovetailing into My Golden Days, Desplechin’s dark comedy from 1996 follows Paul Dedalus, who is at a crossroads in his life. He has to make several decisions; should he complete his doctorate, does he want to become a full professor, does he really love his long-standing girlfriend, or should he re-start with one of his other lovers?

MUBI’s New Argentine Cinema season continues with two from Laura Citarella. A young woman wins a 4-day vacation in a hotel in Ostende, a sea resort near Buenos Aires. It is the low season, and she gets to the place alone—her boyfriend will join her a few days later, interrupting this beach-set, intriguing micro-cosmos that might be filled with stories she doesn’t know.

MUBI’s Citarella double-bill concludes with La Mujer de Los Perros. Co-director Llinás plays an intriguing, unique character in this existentialist fable about a woman who lives with a pack of dogs on the very edge of the populated world, with minimal contact with other people. The seasons come and go. On life and survival, love and death.

The lives of two brothers, who live in N’djamena, are upended when they awake one Saturday morning to find that their father has left the family in Mahamat-Saleh Haroun’s 2002 drama.

Three Lives and Only One Death – 24th August

MUBI kicks off a mini-season exploring Raúl Ruiz’s dreams with Three Lives and Only One Death. Marcello Mastroianni stars as man who shares four names and four personalities (which is the real one?). This mysterious figure is the link between four different, yet strangely similar, stories involving love, lust, crime and time.

Ellen (Jeanne Balibar) must come to terms with a new turn in her life. Although her job as a flight attendant keeps her circling the globe, she feels her private life has become a kind of placebo, giving her the sense of security she needs so badly.

Lake Bell’s writing and directing debut is a brilliant indie gem set in the tough world of voiceovers.

The Romance of Astrea and Celadon

The Parrot and The Swan

MUBI’s Alejo Moguillasky triple-bill continues with his 2013 comedy, which skillfully articulates the world of dance – pecifically, the shooting of a documentary about a series of ballets – with the story of a break-up and a romance.

Raul Ruiz’s surrealist fantasy drama features three characters – a murderous and provocative, albeit angel-faced boy, a woman who may be his mother, and a man who may be the same boy.

MUBI’s latest Special Discovery is this 2016 Egyptian drama from director Yousry Nasrallah. With his sons, Refaat (a passionate cook) and Galal (a womanizer), chef Yehia manages a wedding caterer. Karima, Yehia’s niece, is promised to Refaat, but he loves Shadia, without knowing that Karima loves also someone else. Over the course of the wedding, Karima finds a way to reveal her feelings.

Neill Blomkamp’s superb feature debut skips the alien invasion part to focus on the social fallout of a bunch of refugees being housed in a makeshift tent city outside Johannesburg. Sharlto Copley plays a field agent who ends up infected by a virus that begins to alter his DNA, placing him on the outside of civilisation, finding his way through the extra-terrestrial migrant community. Sci-fi, political commentary and guns that fire pigs. What’s not to like? Read our full review.

MUBI’s Argentine season kicks off with Balnearios, a 2002 gem that marks the inauguration of El Pampero’s work. The “documentary” profiles the titular Argentine bath resorts and the idea of cities dedicated exclusively to idleness, empty along the winter months and crowded in the summer.

Whit Stillman’s comedy is an acquired taste, but for those who have already acquired it, this is a delightfully witty, whimsical affair, featuring a new dance craze and Greta Gerwig on top form. Read our review.

Damsels in Distress
Available until end of: 21st August

Murder by Contract
Available until end of: 24th August

After the Rehearsal
Available until end of: 25th August

Dogtown and Z-Boys
Available until end of: 26th August

Lords of Dogtown
Available until end of: 27th August

The Passenger
Available until end of: 28th August

Casualties of War
Available until end of: 30th August 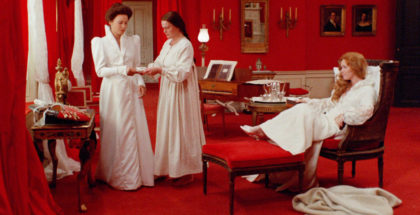