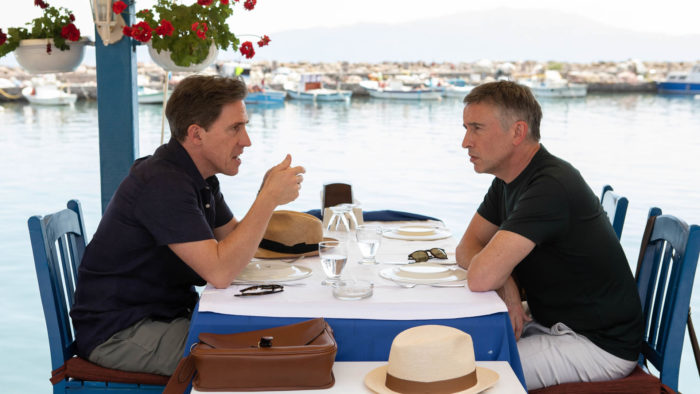 Sky’s growing number of original shows and ever-expanding catalogue of blockbusters is ideal for keeping your days and nights occupied, but before you break open new box sets or devour some big-hitting films, don’t miss your chance to catch some modern gems before their rights expire and they depart.

That means taking care not to miss out some of Sky’s exclusive comedies, including Breeders, Bulletproof, The Righteous Gemstones, Hitmen and The Trip to Spain and The Trip to Greece – plus underrated dramas COBRA, superhero stunner Legion, sci-fi thriller Westworld and Soderbergh’s innovative Mosaic.

Jordan Peele, the mind behind Us and Get Out, invites you back into another dimension in this revival of the classic anthology series, with stars such as Chris O’Dowd, Seth Rogen, Greg Kinnear, Sanaa Lathan and Adam Scott appearing in a series of spine-tingling, stand alone morality tales with wicked twists – all updated for a new, socially conscious generation.

Martin Freeman plays impressively against type in this darkly funny exploration of parenting and toxic masculinity.

Created by Abbi Jacobson and Ilana Glazer and produced by Amy Poehler, this hit American comedy follows two best friends navigating their 20s in New York City. They may be broke and flawed, but they never shy away from the absurd situations and awkward encounters the Big Apple throws at them.

The Trip To Greece and Spain – 31st May

Sharon Stone smoulders in Steven Soderbergh’s chilling puzzle box of a crime mystery, as the Basic Instinct star plays a successful author whose dead body is discovered after a New Year’s Eve party.

Danny McBride (Eastbound & Down, Vice Principals) writes and stars in the story of a world-famous televangelist family with a long tradition of deviance, greed and charitable work – all in the name of the Lord Jesus Christ. Jesse Gemstone (McBride) is a maverick in the ministry game. He has taken the congregation that his father Eli Gemstone (John Goodman) created and used it to build a megachurch for the modern-day churchgoer. But upon returning from a baptism marathon in China with his father and brother Kelvin (Adam Devive), Jesse receives a video from blackmailers seeking to sully his reputation.

Noah Hawley’s X-Men series is a mind-bending piece of TV, following David Haller (Dan Stevens), a haunted man with power beyond comprehension. His power does not come free, but at the steep cost of David’s mind. Plagued by numerous split personalities – each commanding a different aspect of his power – David is trying to find his way back to sanity. He’s about to give up… until he met the girl of his dreams (Rachel Keller).

The critically-acclaimed drama, diving deeply and darkly into the dawn of artificial consciousness and the evolution of sin returns… and the inmates have escaped the asylum. Season three sees Aaron Paul and Vincent Cassel join the cast as the critical event that marked the finale of the last season threatens to consume the outside world. Season 1 and 2 are available until 5th June.

Noel Clarke and Ashley Walters are a charming double-act in this comedy about two streetwise London cops who strap up, strap in and speed around the city crushing crime, from robbery and kidnap to murder. But work occasionally has to take a back seat as family man Pike tries to escape his father’s shadow, and brooding bad boy Bishop smashes headlong into a personal crisis he never saw coming.

Set in the heart of government during a time of national crisis, this high-stakes British drama stars Robert Carlyle as Prime Minister, Robert Sutherland, and Victoria Hamilton as his Chief of Staff, Anna Marshall. Under the name COBRA, a team comprised of Britain’s leading experts, crisis contingency planners and the most senior politicians must now assemble to help bring society back from the brink of collapse, as they deal with an unfolding national emergency after catastrophic events literally throw the nation into darkness.

Mel and Sue are a convincing double act in this darkly funny and oddly sweet comedy about two assassins.

Created by Nick Mohammed, this workplace comedy is set in the UK’s GCHQ—a kind of weedier, geekier version of MI5, where they tackle international and domestic Cyber Crime from a desktop. But when a pompous, maverick NSA agent Jerry (David Schwimmer) comes over from the U.S. to join the team, he enlists an inept and tactless computer analyst Joseph (Nick Mohammed) in a power grab that threatens to disrupt the team’s ability to combat cyber terrorism.

25th May
Only Fools and Horses: Season 6
Ridiculousness: Season 15

26th May
David Attenborough’s Conquest of the Skies
How Do They Do It?: Season 16
This Is Our Family: The Hoyles: Season 1

29th May
Strike Back: Vendetta: Season 8

29th May
Celebrity Ex on the Beach: Season 1
Drain The Oceans: Season 1
Fresh Off The Boat: Season 3
The Joy of Painting with Bob Ross: Season 19

10th June
Alaska: The Last Frontier: Season 4 to 8
To Catch A Smuggler: Season 1
This Is Jinsy: Season 2

Nic Cage and John Travolta swap faces. Yes, this is an actual film that actual exists. It’s better than you could possibly imagine.

This family fantasy starring Julie Andrews as the eponymous nanny is guaranteed to make you smile.

Old wood carver Mr Meacham (Robert Redford) has delighted local children with his tales of the fierce dragon that resides deep in the woods. To his daughter, Grace (Bryce Dallas Howard), who works as a forest ranger, these are just stories until she meets Pete (Oakes Fegley), a mysterious 10-year-old with no family and no home who claims to live in the woods with a giant, green dragon named Elliott. Charming family entertainment.

In an age of reboots, reimaginings and straight-up reversals, Kenneth Branagh’s live-action Cinderella almost appears bold by comparison: where others have tweaked, updated or subverted fairytale traditions, Cinderella follows them to the letter.

Chris Pratt and Bryce Dallas Howard renew their roles when, three years after the destruction of the Jurassic World, they are asked to return to the theme park to save the resident dinos from the island’s active volcano. As they attempt to save the terrible lizards from going extinct a second time, they uncover a conspiracy that may affect the entire planet. A Monster Calls director J A Bayona takes the helm for this second chapter in the Jurassic World story.

The sky is the limit, as Dwayne Johnson takes on terrorists at 3,500 feet. The Rock plays Will Sawyer, a former FBI agent and war veteran who now works as a security specialist for high-rise buildings. As he assesses the top half of The Pearl, a just-finished, 240-story building in Hong Kong, a team of international mercenaries strike, setting the building alight and framing Will for reasons unknown. With his wife and family in the building, it’s down to Will to clear his name, beat the baddies and save his family.

27th May
Leave No Trace
The First Purge
Unbroken: Path To Redemption

3rd June
This Is The End